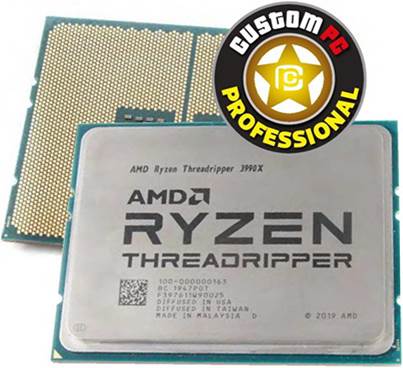 Let’s be honest. AMD’s 64-core Threadripper 3990X is so far outside the envelope for most of us that it’s a desktop CPU in name only. The high motherboard cost, eye-watering CPU price and sheer number of cores mean this monster CPU is not only out of reach for most of people, but completely unneeded too.

We already began to see the limits of standard Windows­based desktop PCs with AMD’s Threadripper 3970X, with diminishing returns in many benchmarks that simply can’t scale to use so many cores. Throwing a 64-core beast at them isn’t likely to improve the situation, so while the Threadripper 3990X is undoubtedly a monster CPU, its still a niche product that needs the right conditions to show its true potential.

Its specs certainly pack a punch, though, with a monumental 256MB L3 cache and 32MB L2 cache, thanks to all four Core Chiplet Dies and their corresponding eight Core Complexes being enabled. Despite this, AMD maintains the same 280W TDP as the other two 3rd-gen Threadripper CPUs, thanks to lower boost frequencies.

Indeed, we observed an all-core boost of 3.25GHz in Cinebench R20’s multi­threaded test with our 240mm all-in-one liquid cooler, but the 32-core Threadripper 3970X regularly hit 3.9GHz. As such, unless all those cores are fully utilised, the cheaper Threadrippers may end up being faster in some lighter-threaded tests. The single-core boost is also 200MHz lower than the Threadripper 3950X, and our experience with Precision Boost Overdrive and manual overclocking Zen 2 CPUs is that it’s unlikely you’ll attain a higher peak boost than that.

At stock speed, our usual benchmarks failed to respond to the extra cores, which is to be expected. There was little difference in our mostly single-threaded GIMP image editing test between the 3990x and the 3970X, although both chips still outperformed Intel’s Core i9-10980XE here. The result from our multi-threaded video encoding test was disappointing, but again, this is down to HandBrake simply not utilising this many cores. In fact, even Intel’s 18-core CPUs represent poor value here, even if they show a little scaling. The system score in the end was similar to other 3rd-gen Threadripper CPUs, so the 3990X wan’t give you much more performance in general mainstream use, if any.

We then used two versions of Blender in our testing, as the latest version better supports high core-count CPUs. In version 2.79, the 3990X was only a couple of seconds quicker than the 3970X, but in the newer version, it was 37 per cent faster, showing much better scaling. Cinebench R20 also saw a sizeable improvement, with 397OX’s 17,303 score eclipsed by the 3990X’s 24,116.

Overclocking quickly results in a power supply-battering, cooler-melting exercise, but ultimately our goal was to improve that all-core boost frequency from 3.25GHz. Our powerful EKWB Phoenix liquid cooler certainly helped, as it meant that applying PBO and maximum automatic overclocking settings in Ryzen Master saw the CPU hit 3.9GHz across all cores under load.

This saw the power draw rocket to 845W, but the Cinebench score rose to a massive 28,432 and the Blender 2.82 result fell from 31 seconds to just 24 seconds (although performance massively dropped in Handbrake). The CPU regularly topped 80“C at these settings, though, so you’ll need monstrous cooling for long load periods. 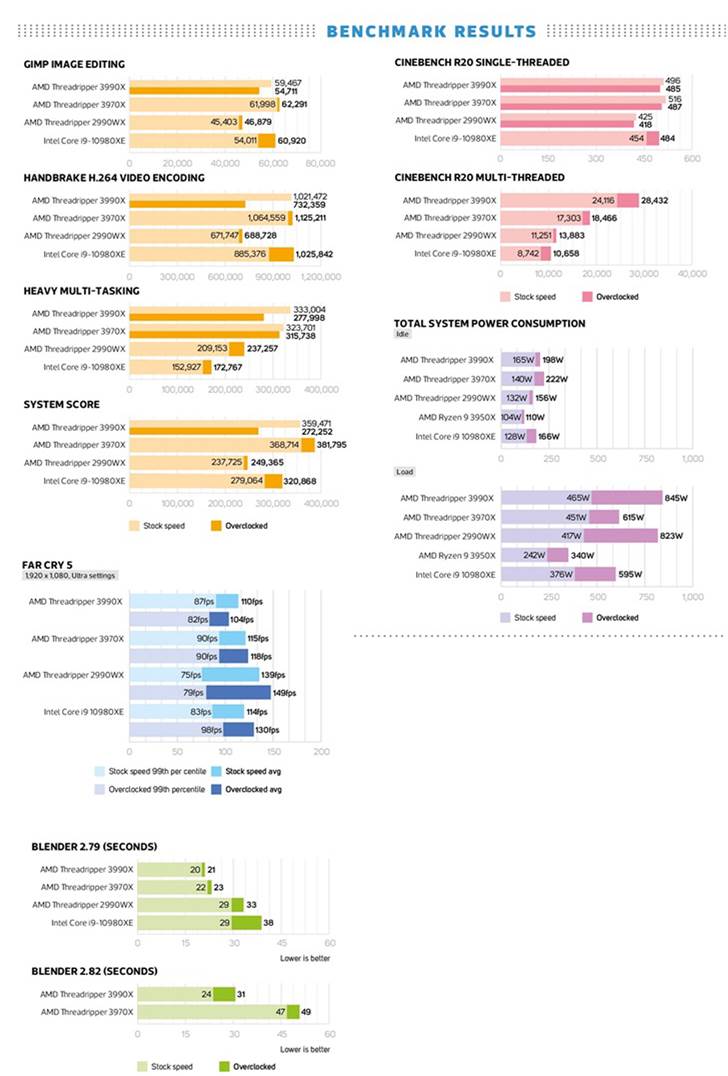 While the Threadripper 3960X makes for a compelling, super-powerful all-rounder, the Threadripper 3990X is more of a niche product for specific workloads. It’s superb where all those cores and threads are fully utilised, tearing up the already powerful Threadripper 3970X and offering nearly double the performance once overclocked.

However, much cheaper CPUs are faster in most mainstream software, even when it’s multi-threaded.

Despite its bragging rights potential the 3990X is therefore not a CPU we should aspire to own. A Threadripper 3960X will be much more fitting for a hardcore gamer that hits content creation applications just as hard. For those with the budget and applications hungry for this amount of CPU horsepower, though, the Threadripper 3990X is undoubtedly the ultimate multi-threaded desktop CPU.