This is a digital-to- analogue converter with a difference – a valve-equipped preamp, and true resistor-ladder conversion. The resulting musicality is thrilling. Read our AQUA LA SCALA MKII Review.

Northern Italy is known for very exclusive handmade technology. Think Ferrari and Lamborghini. Perhaps less well-known is Aqua — ‘acoustic quality’ — based in Milan. A Ferrari typically costs around 20 times the price of a mundane car. So perhaps it isn’t surprising that there’s a similar factor in the pricing of the Aqua La Scala MKII Optologic DAC compared to a run-of-the-mill DAC.

For your investment, you get a handsome, weighty product — wider than regular component width at 450mm, while at nine kilograms, it’s way heavier than you’d expect in a DAC. It is fronted by a 10mm-thick slab of aluminium which overhangs the main body slightly to the left and right, and has a gently curved top. ‘La Scala’ is printed prominently in a clean, elegant font at front centre.

Two rotary switches are towards the left. One is for on and off, and this is real on and real off — the latter cuts power. The other switch is marked for five positions with Roman numerals, specifying the inputs.

Also on the front panel is a small toggle switch. This inverts the output phase. It is located in a horizontal slot in the front panel some 130mm wide by 10mm tall. Next to the switch is a power-indicating LED.

The right-hand 95mm of the slot is cut all the way through to expose the inside of the unit. In there nestle two ECC81 vacuum tubes, which form part of the pre-amplifier circuitry. They are fully contained within the case, but Aqua notes that the “La Scala MKII uses long-life valves with an average life of approxi­mately 10,000 hours” — that’s would constitute some two hours listening a day for 13 years. Aqua says that the triode valves are directly connected to high-voltage MOSFETs, resulting in an analogue stage with a wide bandwidth, simple design, low output impedance, no feedback, low distortion and “no overshoot, no ringing, no roll-off”.

The cabinet is also constructed from sturdy aluminium, coated with Nextel material which helps suppress physical resonances. The back panel features five digital inputs and two sets of analogue audio outputs. Those outputs are a pair of high-quality gold-plated RCA sockets, and a pair of balanced XLR outputs.

I Supertramp’s 1970 debut album was beautifully presented, with a real presence, as though a window were opened through time and space to those recording sessions… 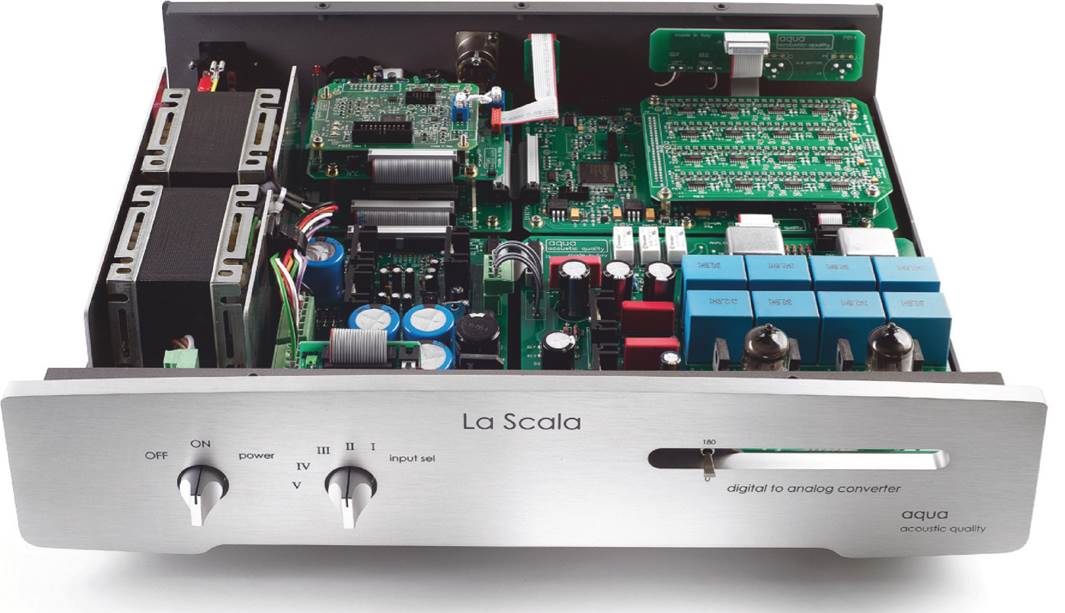 On the review unit the inputs consisted of an AES/EBU XLR socket, two coaxial digital audio sockets (one RCA and one BNC), a USB Type-B for using the unit as a USB Audio device with a computer, and an RJ45 socket. This last is for transporting audio from Aqua’s La Diva compact disc transport and is called ‘AQlink’. We understand that you can specify an optical digital audio input as an alternative at time of purchase, or for replacement at a later time. Aqua’s equipment is modular, so internal elements can be upgraded as improve­ments appear over time.

Originally, digital-to-analogue converters simply used a resistor ladder with an ‘R-2R’ configuration to reconstruct an analogue signal from a PCM input. Since the 1980s that technique has been largely replaced by

As the climax of the finale approached, the peak levels grew, yet the signal was of such clarity that it held together perfectly even to the final, nearly overpowering, moment… alternative technologies in order to overcome some problems with the early implementa­tions. Specifically, it was hard to make an accurate-enough resistor ladder, given the many orders of magnitude involved in the output signals, while the implementation of a hard low-pass filter between 20,000 hertz and the Nyquist frequency of 22,050 hertz was thought to adversely impact sound quality.

So R-2R decoding became largely replaced by other techniques including massively oversampling systems. These days, delta sigma decoding is one of the most common systems, converting PCM to a DSD-like pulse density modulation system.

But a few select high-end audio companies, Aqua included, have returned to resistor ladders, investing in extremely high precision resistors to maintain accuracy, while for the low pass filter… well the La Scala simply uses none, eschewing filtering above the sampling frequency. Aqua notes that the La Scala “is a digital filter-less DAC” and explains Aqua’s “conviction that in spite of the instrumental measurements showed by upsampling/over- sampling DACs, they rarely are able to produce the same emotional and realistic results.”

The La Scala also supports DSD in regular (DSD64) and double-speed (DSD128) forms. While it doesn’t support MQA, that format’s main current use for TIDAL ‘Masters’ streaming can be enjoyed just by letting the TIDAL app unfold the first level of high resolution encoding, so that the DAC can be fed up to 96kHz high resolution audio.

We used the Aqua La Scala with both a Mac Mini and a Windows 10 computer. No drivers were required for the Mac, which instantly recognised the La Scala, reporting that the DAC supported signals from 16 bits and 44.1kHz through to 24 bits/384kHz.

For the Windows computer we downloaded the drivers from the Aqua website. It installed easily. It made available four audio interfaces: ASIO, WASAPI, Kernel Streaming and Direct Sound. Windows reported that the Direct Sound interface — the one Windows uses by default — supported up to 24 bits and 192kHz sampling. To go all the way to 384kHz you’ll need software that uses ASIO, WASAPI or Kernel Streaming. We used the JRiver Media Center on both Windows and Mac. This lets you select whichever interface you like.

With one small wrinkle, all the supported audio worked properly first time. That included PCM up to 24 bits, 384kHz, DSD64 and DSD128. The wrinkle was with the Windows computer, where JRiver initially would not play any DSD content, because JRiver was trying to send a native DSD bitstream to the DAC. It supports DSD in the form of DoP, in which the DSD is packed into a PCM-like bitstream.

That explains why the unit won’t work with DSD256. In DoP format it would have to be packed into a DoP container with a sampling rate of 705,600 hertz, which USB doesn’t seem to support.

There’s no visual feedback as to the format that the DAC is receiving; we do like DACs which offer an LED or display confirming that all is coming through as it ought to, given that setting up computers, in particular, to feed bit-perfect digital audio to an external device can sometimes be tricky. A workaround if you’re using a Windows computer is to click on the red ‘T’ symbol in your Windows System Tray (the bit at the bottom right of the screen — you may need to click on the Carat symbol to expose it). That will open up the USB Audio control panel for the Aqua La Scala. Click on ‘Device 0’ and you can see the ‘Current Sample Rate’ which will show what the DAC is being fed by the computer. (If you’re sending DSD, it looks like PCM to the system and will show as 176,400 hertz sampling for DSD64 and 352,800 hertz for DSD128.)

Of course, you can use the unit’s other digital inputs with various streamers, CD transports and so on. Those are limited to 192kHz sampling. 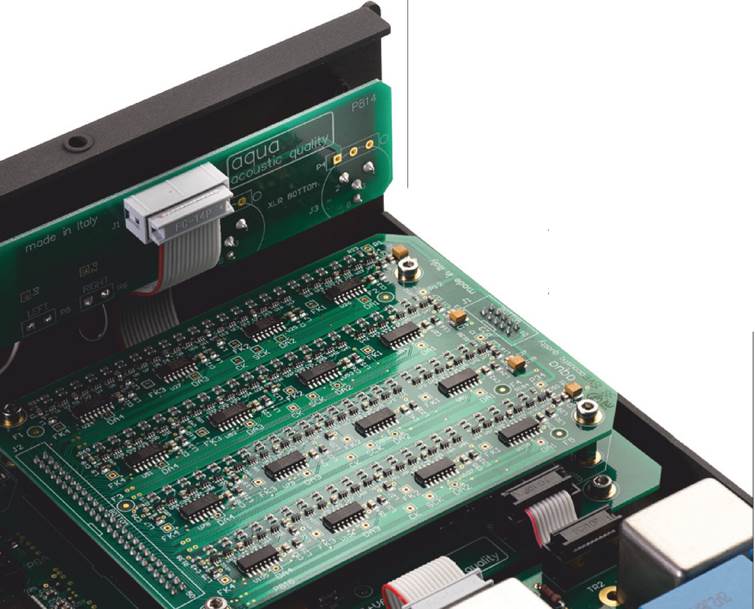 The rows of laddered resistors are evident on the La Scala circuits above each set of ICs.

We ran the gamut of our favourite tracks through the Aqua La Scala DAC, some fed by JRiver, others by TIDAL. The results were uniformly excellent. Indeed, as good as we’ve ever heard them. For the most part we used our KEF LS-50 speakers, supported with a subwoofer and 125 watts per channel. This system is extremely revealing. And what it revealed was wonderful.

For example, the subtlety and layering in the middle section of the track Try Again from Supertramp’s 1970 debut album was beautifully presented, with a real presence, as though a window were being opened through time and space to those early-hours recording sessions.

As we were attempting to write the introductory section of this review, Rickie Lee Jones’ 2000 album ‘It’s Like This’ — the DSD version — kept yanking our attention away from our fingers and words to the sound being presented by our system, fed by the La Scala. Again, there was that sense of presence. Jones’ voice hovered there, surrounded and contained in the field of the accompanying sounds. It was brilliantly detailed, without presenting any sense of unnatural sheen. The spread of instruments resulted in a sound-stage wider than the physical placement of our left and right speakers. But it was the sense of front to back that was impressive, thrilling even.

Power was not a problem, either. The Chandos recording of Shchedrin’s 1960’s ballet re-write of Bizet’s ‘Carmen’ performed by the I Musici de Montreal, directed by Yuli Turovsky, was just that: powerful. This version is intensely dynamic, with an ensemble dominated by percussion. The bass delivery was tight and unconstrained in intensity. As the climax of the finale approached, the peak levels grew, yet the signal was of such clarity that it held together perfectly even to the final, nearly overpowering, moment.

Aqua specifies the output of the La Scala at 2.2 volts, both for the unbalanced and balanced outputs. We measured a slightly hotter output of 2.6 volts RMS with a 1002Hz sine wave peaking at 0dBFS. That should present no problem to any line input, while making most systems seem a little more lively than usual.

The apparent omission of a filter was intriguing. We checked and indeed there was a clear step pattern shown on the 1002Hz sine wave. For mathematical reasons, omitting a filter when reconstructing analogue from a PCM signal results in a roll-off in output as the Nyquist frequency — half the sampling rate — is approached. So the output was down by around 2.5dB at 20,000 hertz with CD-standard PCM. To our ears neither of these effects was audible.

The Aqua La Scala DAC is a handsome, high-end unit with what’s arguably an idiosyncratic approach to digital-to-analogue conversion, one that requires a high-end level of attention to make work. The proof of Aqua’s success is that musically, the La Scala is in every way first-class.