Arcam’s amplifier looks traditional enough, but it turns out to be a fine example of a thoroughly modern amp combining music streaming with traditional connections, as well as Arcam’s powerful Class-G amplification. Read our ARCAM SA30 Review.

A ream’s reputation was built on amplifiers, and particularly this breed of high-quality midrange integrated amplifier. Indeed products from Aream remain instantly recog­nisable, so that while this new range has had a pleasing spruce-up updating the aesthetics, someone transported from the 1990s and familiar with the company’s then-‘alpha’ range of products would have no trouble spotting the evolutionary path that has led to the latest SA models, which are part of Arcam’s HDA range.

But alongside this continuity there has been significant change. The new range is Arcam’s first under the ownership of Harman, itself only recently acquired by Samsung. Talking with US-based Harman staff, they seem delighted with the acquisition, seeing Arcam

With its integration of Chromecast, AirPlay and UPnP streaming, Arcam has satisfied the ‘complete stereo system in a box’ concept, along with some serious power… as not only providing Harman with a useful midrange electronics brand below the relative heights of Lexicon and Mark Levinson, but also bringing access to Arcam’s expertise and technologies, including the Class-G amplifica­tion developed by the company’s John Dawson.

That Class G is used in this SA30 model, as it is in the SA20, while the lowest amplifier in this HDA range, the SA10, uses traditional Class-AB amplification — which is to be sneezed at, given Arcam’s long-honed skills at such circuits; we loved the SA10’s sound when we reviewed it last year.

There’s a clear levelling up of power as you progress up the range. The SA20 gets you Class G amplification, 90W per channel of it, while the SA30 ups that to 130W per channel into eight ohms, or 200W into four ohms. These wattages are quoted a little strangely by hi-fi standards (see specs box), but the SA30 numbers proved, if anything, conservative compared with its abilities.

Potentially as important for many users, the SA30 adds networking via Ethernet or Wi-Fi (using screw-in antennas), thereby allowing all manner of streaming. This includes GoogleCast streaming, AirPlay 2 streaming, and UPnP streaming from shared files on the network, these last selectable using Arcam’s dedicated MusicLife app or, alternatively, any third-party UPnP control app such as mConnect or BubbleUPnP (Arcam’s own software being fairly bare-boned). Roon subscribers will see the Arcam as an endpoint in the Roon app, too.

Not only is high-res music supported by the Arcam’s 32-bit ESS Sabre ESS9038 DAC, but MQA files can also be played, including MQA-formatted Tidal Masters.

The Arcam’s streaming abilities may steal the headlines, but it’s the physical inputs that can make the SA30 the nucleus of a multi­source system. Digital connectivity features two each of optical and coaxial digital inputs, one USB-A socket, and an eARC-supporting HDMI connection. The only obvious omission would be USB-B so you could plug in a computer — but instead you could stream from your computer instead via AirPlay 2 for Macs or UPnP for Windows computers.

Turning to analogue, there are a healthy three pairs of RCA line-level inputs plus two phono inputs, for turntables with either moving-magnet or moving-coil cartridges.

All these are assigned labels that may (but probably won’t) match what you plug into them — the analogue line-levels labelled as CD, PVR and STB, the digital ones as SAT, BD and AV, and so on.

But this connectivity ensures pretty much any audio component or TV can be connected to the SA30, excepting only those offering balanced XLR inputs, the lack of which is a little surprising given that the matching CD player, the CDS50, offers these as outputs.

A pair of pre-outs allows the user to bypass the Arcam’s power amplification for an alternative power amp (disappointingly there’s no way to have these deliver a full-level signal in the manner of a ‘record out’), while an RS232 connection accommodates integration into a smart-home automation system. There’s a full-size headphone socket on the front panel.

Arcam has also included support for Dirac Live room correction technology, which aims to optimise signals for the specific connected speakers, as well as conducting room correction. This requires a computer (Windows or Mac) to run the Dirac Live desktop application, connecting the supplied USB microphone and measuring 13 positions around your living room before the software calculates and corrects the results. We rarely go with such processing systems, which seem an odd thing to put on the end of an amplifier designed for purity, but in this case it did noticeably clean up the sound.

Talking of purity, in its default configuration the SA30 converts all the analogue signals into digital — it would have to do this to digitally process signals with Dirac before they are converted back with its DAC. This is increas­ingly common in modern amplifiers, but here we greatly praise the included ‘Analogue Direct’ mode, which bypasses that system to send the input straight through to the preamp stage. If analogue purity is your goal, use this option.

The remote control is very smart, carrying its own bank of codes to control other devices, and able to learn any codes it doesn’t have pre-installed. You can set the CD and amplifier sections of this remote to control different devices — even two devices neither of which are Arcam, if you so desire. Quite a useful thing just on its own merits, this remote!

While we like the overall traditional design, the front-panel display is perhaps a little ‘20th century’ considering the SA30’s modern streaming talents — compare the strip of lettering here with the large colourful displays from some competitors which show artwork or offer touch controls. Watching letters slowly scroll across the display is about as visually painful as modern hi-fi gets.

Once the sound emerges, though, all those visual concerns fade away. The Arcam delivered all the sonic smoothness, scale and powerful muscularity we’ve come to expect from Arcam components and Class-G amplification. And so many ways to play! — we streamed high-res files from a Naim server, played Tidal and Spotify streams over Chromecast, and plugged up our reference turntable, consistently enjoying the most pleasant of easy-listening states.

The Arcam’s rendition of L.A. Salami’s When The Poet Sings was full and clear and detailed: the tender acoustic plucking lush and convincingly tangible, his conversational vocal engagingly dynamic, with all the quirky intricacies that make his storytelling so compelling left intact.

The Arcam’s appetite for vocals is exemplary. That pleasing clarity and subtlety is presented on a big, spacious and tonally- even canvas — one that puts space between the melodic electric strings and the acoustic strums they sit upon, without sacrificing their intended interplay.

Overall the sound is fast and fluid, large and easy-going, yet able to offer the scale, openness and low-end impact to communicate the sinister tone of Bon Iver’s We, while also injecting the spaciousness necessary to keep the increasingly dense production nicely 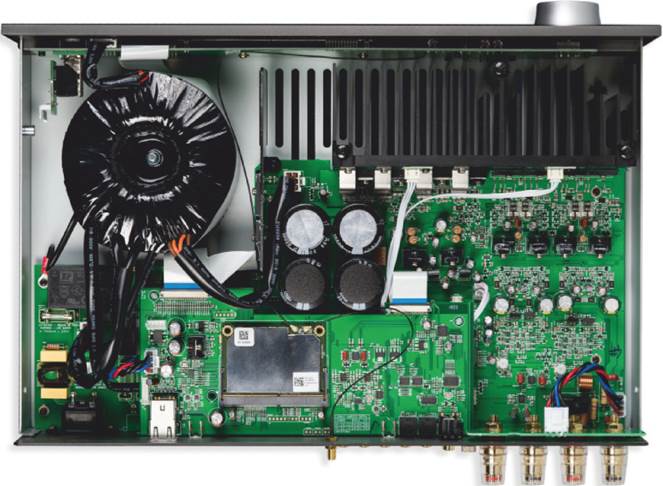 intelligible. It’s this sort of scale that really gives atmospheric instrumentals their fair due. Colours In Space by Explosions In The Sky emerged fittingly cosmic, the Arcam capturing the dimensionality and dynamic scope of the striking soundscape.

Of the seven digital filters available, we preferred the default Apodizing, although the others, which include Brick Wall, Minimum Phase Fast Roll Off and Linear Phase Slow Roll off, all offer subtle differences (very subtle sometimes), so give them a play.

The Arcam SA30 is a fine example of a modern amp combining music streaming with traditional connections. With its integration of Chromecast, AirPlay and UPnP streaming, Arcam has essentially satisfied the ‘complete stereo system in a box’ concept it first offered in the Arcam Solo Music several years ago, but here with some serious amplification power which benefits from the SA30’s Class-G circuitry, delivering fine music alongside all that versatility.

• Transitions well from quiet to loud

Outputs: pre out, speakers out, headphones out