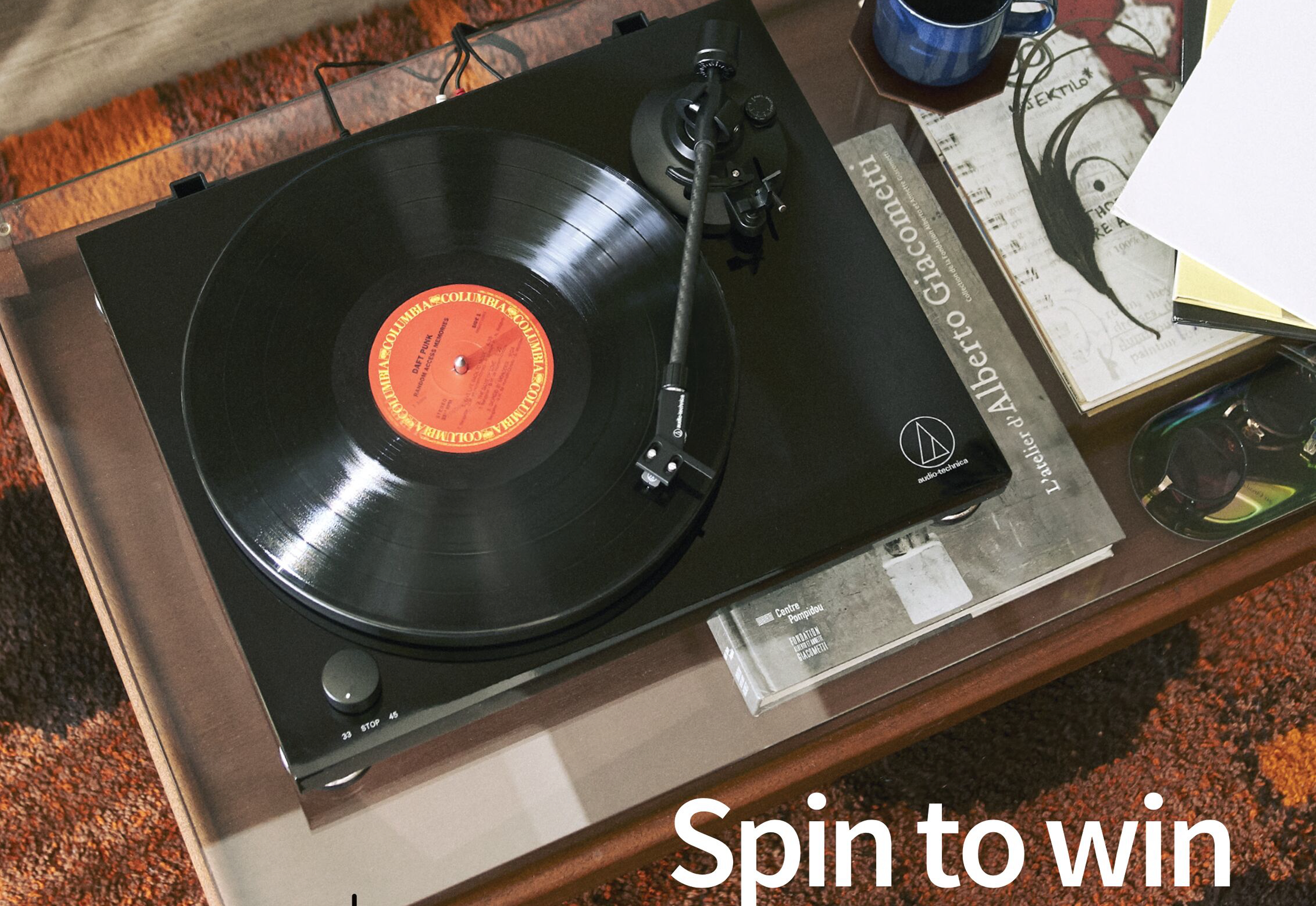 Looks great, sounds great, priced well — we struggle to find anything against this $ turntable.

On the block, in the street, as it were, there are two questions that we get asked more than any other. The first is “should I buy a soundbar?’ — which requires a bit of questioning to clarify their intended use, before we generally answer ‘no’. The second question is “Can you recommend a turntable?” This also requires clarification, as surprisingly often people don’t realise that they will also require an amp and speakers, let alone a phono stage. But more often than not they mean a turntable under $, often well under $, and among our brief list of recommendations, we nearly always say “check out audio-technica’s range”.

That’s not only because audio-technica is hitting 50 years in the vinyl business (having begun as a maker of cartridges), but because audio-technica’s turntables perform remarkably well at whatever price you buy. As we write there are 10 models under $ on the Australian website, including direct drive and belt drive, decks that have phono stages built in, USB output, even Bluetooth.

Currently at the top of that list is the AT-LPW50PB, available in Australia after some anticipation, given that it launched in the USA at virtual CES 2020.

It’s priced at a very reasonable $, and many readers will be delighted that this is a no-frills deck, belt-driven and designed for out-and-out performance with vinyl. No USB output, no Bluetooth. OK, it does come with an in-built phono stage, but that qualifies it for a great many potential customers who want to plug it into something other than a hi-fi amp that is either old enough or new enough to have a phono stage. We’ve helped some of those question-asking folk to create systems where a turntable plugs into their wireless speaker, while they consider the investment of something better. For them it’s just not worth shelling out for a dedicated phono stage. But the AT-LPW50PB will do them nicely.

Especially as it comes in a rather nice piano black finish, so it looks far more expensive than it is. And the build quality is more than skin deep. Take the plinth for a start. It not only looks good, but it is very solidly built, 30mm thick, and with a good chunk of wood involved, not some flimsy bit of plastic. Indeed most of the turntable’s not insubstantial weight (5.5kg) is due to the plinth. A good solid plinth means less resonance and improved resistance to airborne vibration: exactly what you want in a turntable. The plinth is supported by four feet that are slightly flexible, but not ‘springy’ as such.

The AT-LPW50PB has two speeds on tap — 33 1/3 and 45 rpm — selected via the rotary switch at the front left of the plinth. Although the switch has a central ‘Off

position, this simply stops platter rotation. To switch the turntable off entirely you need to access a small press-button that is rather inconveniently located at the rear of the turntable. It’s a low-yoltage switch because power for the AT-LPW50PB is supplied by a switch-mode power supply plug-pack that plugs into a 240V power socket, and it’s this that provides the 12 V of direct current the turntable’s motor requires.

The output is provided on gold-plated RCA phono sockets, rather than the ‘flying’ lead permanently attached to some turntables, and you can select whether to put the phono pre-amplifier in circuit using the slider switch alongside. These sockets are just a smidgeon under standard diameter.

The AT-LPW50PB’s lightweight aluminium platter comes as standard with a rubber mat, but you can optionally purchase one made from anti-static fibre. The two mats have different thicknesses, which mean you will be able to adjust the vertical tracking angle of the cartridge using the mats. (Australian distributor Technical Audio Group kindly included the anti-static fibre mat with our review sample.)

The AT-LPW50PB also comes as standard with a clear Perspex dustcover and spring-loaded hinges, so that if you give the lid a slight push when you first lift it, it will rise automatically to the fully open position without further input from you. The spring loading also prevents the cover from dropping too quickly. Like a soft-close toilet (in this regard only), if you manually close the lid at least to the 45° position, it will descend fairly gracefully by itself thereafter, until it comes to a stop on small rubber stoppers attached to the cover.

The tonearm is a straight-line carbon-fibre statically-bal­anced type with spring- applied anti-skating.

It’s fitted with a universal head shell mount, which

makes it a snack to swap headshells fitted with different phono cartridges. The counterweight is the standard type, with a separate ring to indicate down-force, and when set to 2.0 grams our digital stylus gauge showed down- force at 2.1 grams, so you can trust what it says. The spring-loaded anti-skating force is applied by a small rotary dial at the base of the tonearm mount.

When we checked the alignment of the preinstalled AT-VM95E cartridge, we found that it had been perfectly aligned at the factory, so if you don’t ever replace the cartridge, you won’t need to invest in an alignment tool. (And good hi-fi retailers will provide this alignment as a free service when you buy one, anyway.)

The cartridge fitted to the end of this tonearm is, of course, made by audio-technica (it would be rather bizarre if it wasn’t), and is included in the price of the turntable. It’s

a moving-magnet cartridge with an elliptical stylus released only a few years ago, but an evolution of (and replacement for) the AT-95E, a model that had been in continuous production for almost

40 years as a part of the ‘95’ series. As with all the new AT-VM95 Series, it features the same dual-magnet design which, according to audio-technica “duplicates the ‘V’-shaped arrangement of the magnets in the cutter-head [of the recording lathe] and precisely positions the magnets to match the positions of the left and right channels in the groove walls”

The primary technical difference between the new AT-VM95 Series and the older AT-95 Series is that the new cartridges have newly-designed aluminium cantilevers and re-designed coils. Together, these two improvements have enabled increased output voltage, so the output is now at 4mV, up from 3.5mV.

However there are also a great many cosmetic changes. The cartridge body has been greatly redesigned to the ‘modern’ shape The removable stylus has a ‘slider’ that makes it easier to remove and replace, and instead of fiddling around with bolts, nuts and washers, the new AT-VM95 has threaded brass sockets moulded into the body, so all you have to do is insert and tighten two

screws — much easier! But keep the screws from the supplied cartridge, because not all cartridge screws will fit the 2.6mm Lowenherz threads used here!

The company itself provides an upgrade path through replacement styluses with conical diamonds (VNM95C), elliptical diamonds (VNM95E), nude-mounted elliptical diamonds (VNM95EN), nude-mounted microline diamonds (VNM95ML) and a diamond with a line contact Shibata stylus (VNM95SH). This last profile was originally developed for the four-channel LPs that made a brief appearance in the late 70s, but many audiophiles prefer the sound of its extended high-frequency response. The VNM95C and VNM95E replacement styluses retail for $ and $ respec­tively, a VNM95EN for $, a VNM95ML for $ and a VNM95SH for $. So you could easily keep several and switch them out for special occasions versus day-to-day use.

The AT-LPW50PB was super-easy to set up, because there is so little to do. The rubber drive belt even comes already fitted to the under­surface of the platter. All you need to do here is plug the headshell into the tonearm, fit the counterweight and then balance the arm and set the anti-skating. A strobe disc (and associated strobe light) indicated the platter was rotating just very slightly under speed, the strobe marks edging backwards ever so slowly, slow enough to be musically accurate.

To listen to wow and flutter we played Erik Satie’s Gymnopedies, the double-LP set with two different versions by Dutch pianist Jeroen Van Veen, on which Van Veen achieves a sublime perfection that eludes most pianists, stretching the concept of slowness to the extreme. Despite his incredibly slow tempi, we could not perceive any wow and flutter here at all… not a skerrick.

The same album is also excellent for evaluating the contributions from background noise which, for a turntable, will always be rumble caused by either the motor or the platter bearing… or both. Despite the quietness of the music and the silences between the notes, and the high quality of the pressing, we could not hear any rumble at all, so the AT-LPW50PB got a clean slate in this department as well.

As for the cartridge, it’s obvious why the AT-VM95E cartridge has been one of the world’s best-selling models for almost four decades! It has a smooth, rich sound quality that makes for very easy and very enjoyable listening, particularly on well-worn records, where there seemed less high-frequency noise than when listening via a moving-coil cartridge on a different deck. It also tracks very well, performing decently on Shure’s Trackability Test Record.

Tech tests over, we settled back to enjoy the music. Neil Young’s ‘Harvest’ was delivered smoothly, fluidly and very musically — you can’t really ask for much more than that.

Playing Mary J. Blige’s No More Drama also saw this turntable turning in a cohesive and musical performance, with a surefooted and robust presentation that remained unflustered even as the song became more demanding, delivering plenty of fine detail and rendering the music with a lovely composure, though this was perhaps partly because it was just a little toned-down in the extreme highs.

Deciding to test the AT-VM95E’s ability to deliver fine music while also having the cartridge track at the extremes, we span up Beethoven’s Fifth, and it did a fine job rendering the scale and power of this mighty symphony. The extraordinary dynamics were delivered fluidly, yet with the appro­

priate force and resolution such that we could follow subtle instrumental strands even during the most climactic moments. The stereo image delivered was so precise it was easy to identify the position of instruments anywhere across the soundstage.

So consider this a new entry to the chart of cost-effective and high-value turntables from audio-technica. The AT-LPW50BP leverages the company’s cartridge expertise — and we love the idea of switching in a pricier stylus for special occasions — in a package which should equally satisfy audio lovers returning to the vinyl fold as well as those getting their first deck, wanting something swish-looking yet easy to use, even planning to plug it into something other that a real hi-fi. With the built-in phono stage, the piano-gloss finish and the easy upgradeability, the AT-LPW50BP looks — and sounds — like a winner.