While it’s better known for coolers and PSUs, be quiet! has been releasing a slow trickle of PC cases over recent years and the 500DX is the latest from a company that usually tries to be a little different with its case designs. The 500DX is maybe not as unique as some of its predecessors, with a fairly standard interior, but it’s the cheapest case on test and still manages to pack a punch when it comes to features. 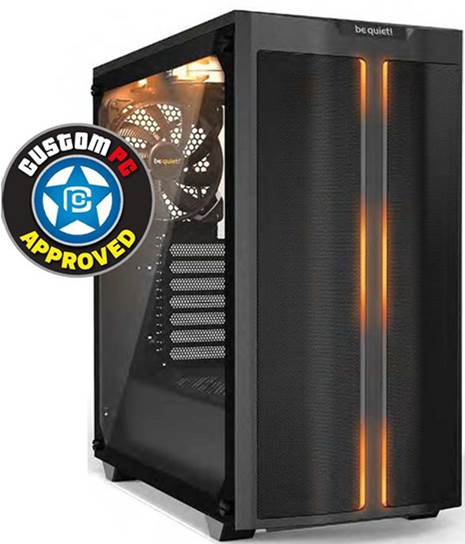 Available in black or white, the case is dominated by a large double mesh at the front and sandwiched between these vents is a twin RGB LED strip. It’s a look that’s innovative and elegant, elevating what would otherwise be a fairly conventional front design.

There’s a huge number of pre-programmed lighting effects, with some seriously funky Knight Rider-esque patterns, but if you prefer more control, there’s a 3-pin digital RGB connector to hook the lighting up to your motherboard too. As if this wasn’t enough, the case also has an LED strip in the roof, which looked fantastic dancing over the white interior

of our sample, but we’d imagine it would look a little flat in the black version.

You get a full-fat USB 3.1 Type-C port on the front panel as well as a single USB 3 port. There’s a large magnetic removable filter in the roof too, plus additional filters on the underside and behind that front mesh, although the latter requires the removal of the front panel to get at it. Inside, be quiet! includes three Pure Wings 2140mm fans, with two of these located in the roof and rear of the case. This will likely offer excellent cooling for CPU air coolers and motherboards, but will result in negative air pressure with the third fan sitting alone in the front of the case.

There’s a plentiful 190mm clearance for CPU coolers too. This compares to 165mm for the Thermaltake H550 TG ARGB, for instance, which isn’t enough to house large coolers such as the Corsair A500.

If you want to dabble in liquid cooling then there’s space in the front for a slim 360mm or 280mm radiator. A removable drive cage offers a home to either two 3.5in hard disks or a single SSD, with four more 2.5in SSD mounts dotted around the rear of the motherboard tray. Cable tidying isn’t quite on a par with the Phanteks P600S or NZXT 510 Elite, but you get a more lavish arrangement than Thermaltake or Corsair’s offerings this month, with a helping of Velcro ties and a large cable-routing section next to the motherboard.

The 500DX was one of the quieter cases on test, but those 140mm fans also did a good job of cooling, with the 50’C CPU delta T being the second best on test. The GPU delta T of 44 C was less impressive, but far from the worst.

The be quiet! 500DX is a corker of a case. In fact, we’d go as far as saying it looks and feels better than Lian Li’s already fabulous Lancool II. If you want RGB lighting and good cooling, it’s a fantastic choice and only spending more to get the Phanteks P600S will bag you a case with more features or upgrade potential.