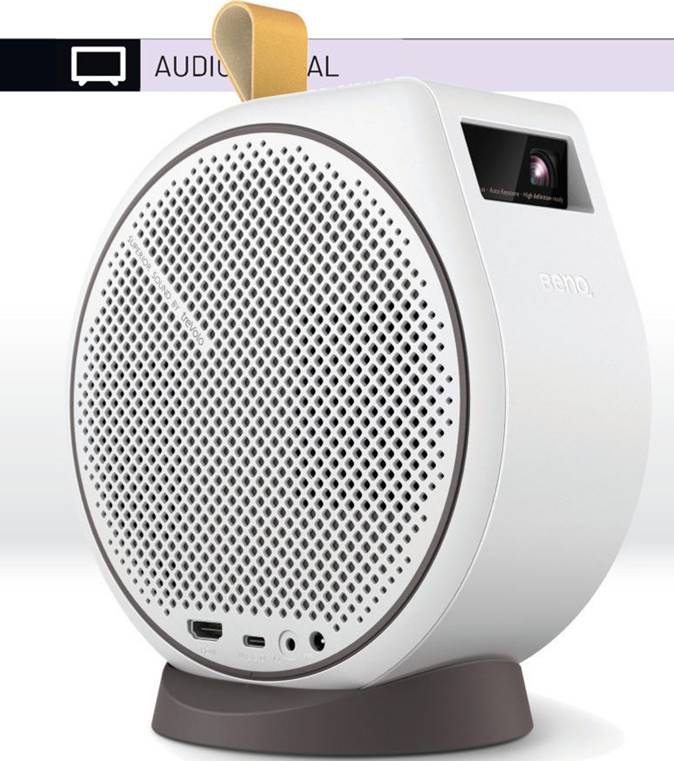 This is one neat and clever wireless projector that aims to make bigscreen performance a portable feast, and set-up an utter doddle. Read our BenQ GV30 Review.

BenQ’s design team has clearly put in some overtime coming up with the GV30. This is a truly portable projector in that the GV30 is light, has a carry handle, and can even operate on batteries for something like 2.5 hours, long enough to play a movie somewhere mains power is not available. It’s rugged, too, with BenQ claiming it to be drop-proof from 70cm, though since BenQ Australia had sent us the first and only unit in the country at the time, we decided it would be kinder not to test that.

It comes with BenQ’s QS01 Android 9.0 HDMI stick, which hides away (see top image opposite) inside attached to an internal HDMI socket and USB power source.

This then provides built-in access to streaming services, as well as the ability to stream video wirelessly from phones, tablets and computers using either the Android stick’s Chromecast or AirPlay.

In addition there is a side HDMI input for external video sources, whether movie players or games consoles, and a USB-C socket which can not only usefully power a phone or tablet while it’s streaming, but which can also play video via USB-C, a relatively recent innovation for devices supporting USB-C DisplayPort. So you can screen-extend from a MacBook, say, or screen-mirror from a Samsung phone. There’s a useful minijack headphone socket, and an attractive and solid remote control comes with the unit. You can even use the GV30 just as a Bluetooth speaker for music, sans video.

Many, though not all, of these attributes have been available on other BenQ mini projectors, such as the GS1 and the delightful little Sound+Image award­winning GS2. But what singles out the new GV30 is its physical design, and how this overcomes a bugbear of all projectors, small and large — positioning.

Rolling in the aisle

The GV30’s near-circular design is no affectation; it is brilliantly functional. With many portable projectors, positioning can be tricky; on a table the projected screen may fall too low, so that you’re left lifting the unit up on a couple of hardback books, or even more perilously tilting it upward by shoving things under one side or another. There also seems a desire among some mini projectors to cater for those who like to shine things on the ceiling — not something we often do ourselves, but for those more prone to prostration, or perhaps to cinematically- enhanced canoodling, we admit that ceilings are more likely to provide a more suitably white surface clear of obstructions (like pictures or picture hooks) than the walls which many mini projector users will otherwise use as a substitute for the genuine screen material that we would otherwise recommend by preference.

Enter the circular GV30. This comes with a little rubber-footed base onto which the body connects firmly using the power of magnetism, and in which position it can then rotate to face anywhere from down to up, and all angles in between.

We’ve seen other designs with variable hinges that attempt the same versatility for direction of image, but none so friendly or downright fun as the GV30.

Better still, a sensor next to the GV30’s tiny lens delivers auto focus and auto vertical keystone (with up to 40 degrees correction either way). If you have this set to automatic in the projector’s menus, it leaps into action whenever the GV30 senses a change. A circular BenQ-branded target appears in the centre of the image, and the picture is then autofocused and auto-squared to within the limits available. On-screen messages indicate how you can easily switch to manual correction and focusing if preferred.

Of course, there is a penalty for using keystone correction — it reassigns pixels, which potentially reduces sharpness and resolution. And given the native resolution here is only 1280 x 720, there’s not so much to lose. Even with a screen size of 98 inches — projected from a distance of around 3.25 metres — we couldn’t get text perfectly in focus;

the text on the Android interface, for example, remained slightly soft even when manually focusing using the remote control. Having said that, at no point did we note the GV30 descending to visible pixellation or screen-door effect even when using keystone; images remained enjoyably smooth, and you don’t notice the softness of edges once a video is playing. Meanwhile the overall procedure really is the easiest and most user-friendly set-up we’ve ever seen on a projector.

The GV30 uses a teeny 0.23-inch DLP digital micromirror device from Texas Instruments (most likely the DLP230NP), along with an Osram LED light source, with LED having the significant advantage over lamps of long life (20-30,000 hours is quoted here), not to mention less objection to being rotated into unusual orientations.

BenQ quotes three different brightness specifications: 300 ANSI lumens, 720 ‘LED lumens’ and 5000 ‘light source lumens’. This is the first time we remember a respected projection company quoting ‘light source lumens’, which is simply the light level emitted by the LED source itself, not the projector as a whole. Other than for those building projectors it’s not, therefore, a very useful figure, as what you get out at the end depends on the efficiency of the entire unit. LED lumens is even less useful, as there’s no recognised definition for measurement. But since it provides a higher number, it tends to be used as, well, a marketing furfy.

So is BenQ quoting the three numbers to boost its own sales proposition?

That was our first thought, but in fact it’s quite the opposite. Faced with competitors using these relatively dodgy website, detailing the differences; its full-length URL includes the phrase ‘why LED lumens are a marketing ploy’, but here’s an easier link: tinyurl.com/LEDlumens2. It’s well worth the read, and great kudos standards, BenQ is offering all three numbers to allow a comparison with the claims for other small projectors, and further, it is out to educate users about the differences. Simultaneous to the launch of the GV30 an excellent explanatory text appeared on BenQ’s

While BenQ bullet-points the GV30 as delivering “clear images even in a lit environment”, you’d better interpret that as very dimly-lit — it washes out under sunlight in daytime conditions with any reasonable size screen. You can see it, and you might use it for background TV or kids cartoons, but you won’t get anything remotely bright until sunset, even if you select the ‘bright’ or ‘daytime’ settings from the six available picture modes (the former of these plays havoc with colour, turning everything rather green; ‘daytime’ is far more natural).

Nor will you approach the colour gamut of which the GV30 is capable until watching under darkened room conditions. There BenQ can fairly claim that the GV30 “can” achieve 97% of the Rec.709 colour space, and it’s by far the best way to enjoy this mini projector’s abilities. You can switch the Daytime picture mode over to Living Room, and

For example, watching Brian Cox on ABC iView as he stands in Newton’s orchard, the apples are bright and red, the grass bright and green. We got the best result — including the sharpest text

—     by first positioning the GV30 where no keystone correction was required, then dropping the sharpness way down to 7 (out of a curious 31) to prevent any ringing around text and objects, with brightness, contrast and colour all around their centre settings. The result was perfectly enjoyable —     though this is a mini projector, and it’s not going to satisfy a videophile used to 4K, or even to compete full-HD projection from a full-size and far brighter projector.

That wireless projection system is easy to use, requiring only that the BenQ and the sending device are on the same Wi-Fi network — so you are restricted to that network’s range. The Android stick’s Wireless Projection app offers choices for iPhone, Android or PC, the last using Chromecast; Mac users could select the iPhone option, which uses AirPlay.

Though lacking Netflix, the Android stick has Stan, Prime, Disney+, Binge, YouTube, all five TV catch-up apps, and plenty more available to download from the Google Play store. As we’ve noted before, this Android stick, like most others, is locked to 60Hz output, so that with Australian catch-up services delivered at 50Hz you would expect notable 50-to-60Hz pull-down judder. In practice, we saw hardly any of it; the lower resolution potentially makes it less obvious than if watching a 4K-flipping DMD in action.

For Netflix BenQ pointed us to a workaround (see tinyurl.com/benqnetflix) using the AptoideTV app with its own Netflix app, but for best results, we would advise running a cable. With HDMI from our MacBook, Netflix (and everything else) was rock-solid — and we gained the option of routing audio a different way, so could use a separate sound system if we wanted.

There is no way to get an audio signal out of the GV30 other than the headphone socket, so no way to listen to material streaming from stick or wireless other than the built-in sound system.

The driver implementation for this is 2.1-channel audio, one woofer firing from the top just behind the carry handle, and the stereo speakers firing from each side of the projector, with two drivers on each side — the cones are ribbed in a kind of tangerine pattern, potentially a stiffening measure, while the roll surrounds are slashed, also reducing distortion.

There’s a fundamental limitation here, which is the projector’s position. If it’s behind you, throwing up a big screen, then the sound will come from behind you, which is about as adverse a location for audio as you could imagine. Even if it’s in front of you, it’ll have to be directly in front to deliver stereo, otherwise you’ll hear audio from mainly one side, and again, from nowhere near the screen.

But the brain is adept at becoming accustomed to such disjointed physical delivery, so you get used to it. The sound quality itself is akin to, say, a reasonable $ Bluetooth speaker — a certain level of bass assisted by a push from DSP, a reasonable clarity for dialogue, and BenQ has sensibly limited the volume before it hits distortion. We wouldn’t be using it regularly for music playback, and we’d really prefer a proper sound system for watching movies and even TV, but this is, after all, a projector designed for portable use, and in that context, it’s certainly adequate, better than any other portable projector we’ve ever heard.

Last audio note: we experienced a slight buzz emerging from the larger driver on the top of the projector, which was not a problem if the projector was behind us, but audible when in front.

It’s hard to imagine a neater projector for shifting around the home, taking on holiday, or having a night-time movie showing on the deck, in bed, or anywhere else you can conceive. While it doesn’t have the brightness to be fully enjoyed in day-time use, and its resolution is only 1280 x 720, the combination here of built-in speakers, Android apps, external inputs and AirPlay and Chromecast wireless streaming makes content playback easy in any number of ways, while that magnificent rolling versatility of positioning, together with auto focus and keystone correction, make it a unique design in making bigscreen entertainment truly easy. The GV30 is an excellent way to get your big-screen entertainment rolling.