Grab your SMG and prepare for action – BenQ’s TK700Sti is a next-gen gaming-optimised 4K DLP projector designed to deliver all your entertainment needs.

BenQ has taken to expanding on its range of pixel-flipping Ultra High Definition projectors by means of specialisation. Some have their focus on the standard home entertainment fare of movies; one has special facilities and dedicated modes for sports fans; and here we have the TK700ST1, labelled as ideal for gamers, and the new Xbox and PlayStation consoles in particular, enabling players to expand their gameplay beyond a mere monitor or TV to a genuinely bigscreen experience.

The traditional problem with bigscreen gaming has been the amount of time that projectors can take to process an image. Delays can mean death to a gamer, quite literally in a first-person shooter. Gamers purchase low-lag monitors and check TV specs to give their performance an edge against competitors, against their console or against their computer.

So BenQ, which has plenty of experience in producing such low-lag gaming monitors, proclaims the TK700ST1 to be “the world’s first 4K HDR low-input-lag gaming projector”. And the good news is that there seems to have been no great penalty taken in the area of TV and movie performance in order to achieve this gaming-friendly status.

The TK700ST1 is usefully compact — 31cm wide and just 3.1kg in weight. It promises 3000 lumens brightness, which is plenty for home cinema use and, depending on your screen size, enough to overcome a little ambient light in the environment.

There are two HDMI inputs, both of them 4K-compatible, plus an RS-232 input and one USB-A slot, which is for service and power only. There’s another HDMI input in a closed-off compartment at the back where you install the supplied QS01 HDMI Android TV dongle. Once networked this dongle brings the usual near-endless apps from Google’s Android TV platform, controlled by the rather nice remote control provided.

As for that low gaming latency, the main promoted lag time is 16.67 milliseconds, available in Game modes for 60Hz content

I the good news is that there seems to have been no great penalty taken in the area of TV and movie performance in order to achieve this gaming-friendly status. regardless of resolution. That’s very impressive for a projector — 16.67ms is the same figure achieved by BenQ’s 1080-resolution gaming projectors, yet here it’s available also with the far larger frames of Ultra High Definition.

The TK700ST1 can accept 1080p at 120Hz, which would then halve the lag to a surely imperceptible 8.3ms. Both the PlayStation 5 and Xbox One S or X can output at 120Hz frame rates, as can PCs. While the best gaming- optimised TVs can go slightly lower in lag still, and gaming monitors even further down, then you’d be losing the joy of wall-sized gaming available from a projector. The TK700Sti can even accept 1080p at 240Hz, should PC gamers have a graphics card so capable, and this would drop the BenQ’s lag to just 4ms.

The three ‘Game’ modes differentiate between key genres of gaming. There’s an FPS mode for first-person shooter games, which enhances detail in order to reveal enemies hidden in shadows, and there’s an RPG (role-playing) mode which delivers BenQ’s “as directors intended” CinematicColor, in this case extending to 96% of the Rec.709 colour gamut available from HDTV and Blu-ray. Thirdly there’s SPG (for sports games), which provides “true colours” for flesh-tones.

Beyond gaming, or for games which don’t require rapid reactions, there are plenty of other viewing modes on offer, including HDR10 and HDR Game modes. HDR10 mode was engaged automatically whenever we played HDR material from 4K Blu-ray. There’s even a 3D mode here, should you have 3D movies and a player capable of delivering them. The glasses you’d need are extra.

This is a 4K projector which uses Texas Instruments’ DLP technology, the micromirrorflipping solution which uses one 1920 x 1080 array of micromirrors to address the screen four times per frame, thereby achieving UHD (consumer 4K) resolution of 3840 x 2160. This projector uses the new DLP471TE digital micromirror device from TI, rather than the DLP470TE we’ve seen in all such projectors reviewed so far; this new DMD was released only in September 2020. So that puts the projection technology here 18 months ahead of those using the older DMD.

Positioning this projector is important for gamers wishing to minimise their lag. While you can correct off-axis screen geometry using keystone correction (this can be cleverly automatic, indeed, for vertical keystone adjustment), this has a penalty beyond the usual compromise in resolution it requires, as the pre-processing then required for every frame will slow you down.

Happily it’s not hard to set up the TK700ST1 accurately, especially with the built-in test pattern that’s available. Get your surface level — or use the adjustable feet if need be — and simply keep the projector perfectly perpendicular to the screen. The TK700Sti is impressively short-throw, so that for our 100-in ch screen its 1.2x zoom lever allowed positioning with the projector’s front edge between 199cm and 239cm from the screen. The manual indicates the projector as being optimised for screen sizes from 60 inches up to an impressive 200 inches.

With the projector in position, we ran Stephen Dawson’s UHD test card, which displays individual pixel lines of colour separated by individual lines of white. This showed that the DLP technology was successfully delivering genuine Ultra High Definition resolution, with the individual pixel lines discernable, if slightly smudged into the gaps. This is just as we’ve seen before from DLP devices, so the new DMD chip would seem to match performance in that regard, if not actually improving on it.

We started our real-world watching by perusing the entertainment options from that Android stick neatly hidden in the back of the projector. This allows access to the Google play app store with its near-endless apps available to install — Disney+, Prime, Stan, Binge, Kanopy (no BritBox), and all five catch-up apps are included. The one glaring omission is Netflix, which is not yet supporting projection Android implementations; to its credit BenQ is very upfront about this, and suggests you call up Netflix on a Chrome browser and then cast it to the Android dongle. We tried this from both a Chromebook and a MacBook Pro and it worked pretty well, with regular little glitches but no obvious image degradation other than a presumed 1080p maximum. Any connected gaming console, PC or Blu-ray player may well deliver full-quality Netflix streaming easily enough via the HDMI inputs anyway.

Certainly we were enjoying the image performance of the TK700Sti from its native apps. Colours were a notable strength, even straight from the box, with vibrant greens and reds, a zingy delivery of the difficult violet of jacaranda trees, yet also maintaining accurate and realistic skin tones. Blacks won’t match those of a TV, and of course are highly affected by any light in the room, but they proved deep enough during night-time viewing to make the BenQ’s colours pop.

From Disney+ the swathes of dark background on the stage of Hamilton were nicely graduated to reveal details of costume patterns even of those waiting in darkened wings. From 4K Blu-ray the value of DLP’s genuine 4K delivery was made evident on the fine recent 4K remasters of Peter Jackson’s The Lord of the Rings, where the extraordinary detail and textures of costumes and props alike now shine as never before. While we had neither an Xbox One or PS5 console to hand, we confirmed the projector’s ability to accept 1080/120Hz from a PC, and ran a little blistering Battlefield 3 at this revealing rate.

Not a bad word on the images themselves then, but we were also watching carefully for motion judder. We’ve found Texas Instruments’ DLP chips previously to be locked to 60Hz output, with judder resulting on 50Hz material in particular from the resulting uneven frame conversion. Yet we saw very little of it. It was not to be expected when we played the 2017 Twin Peaks season on Blu-ray, as this arrived at 1080/60Hz, and the pans over pine trees were smooth, even the wildly spiralling zigzag floor patterns were held in check. We had already been watching plenty of 24Hz movies, and paid close attention to the 4K Blu-ray remaster of The Return of the King, with its wide sweeps of New Zealand landscapes and virtually-added Edoras and Gondor cities, which should have shown 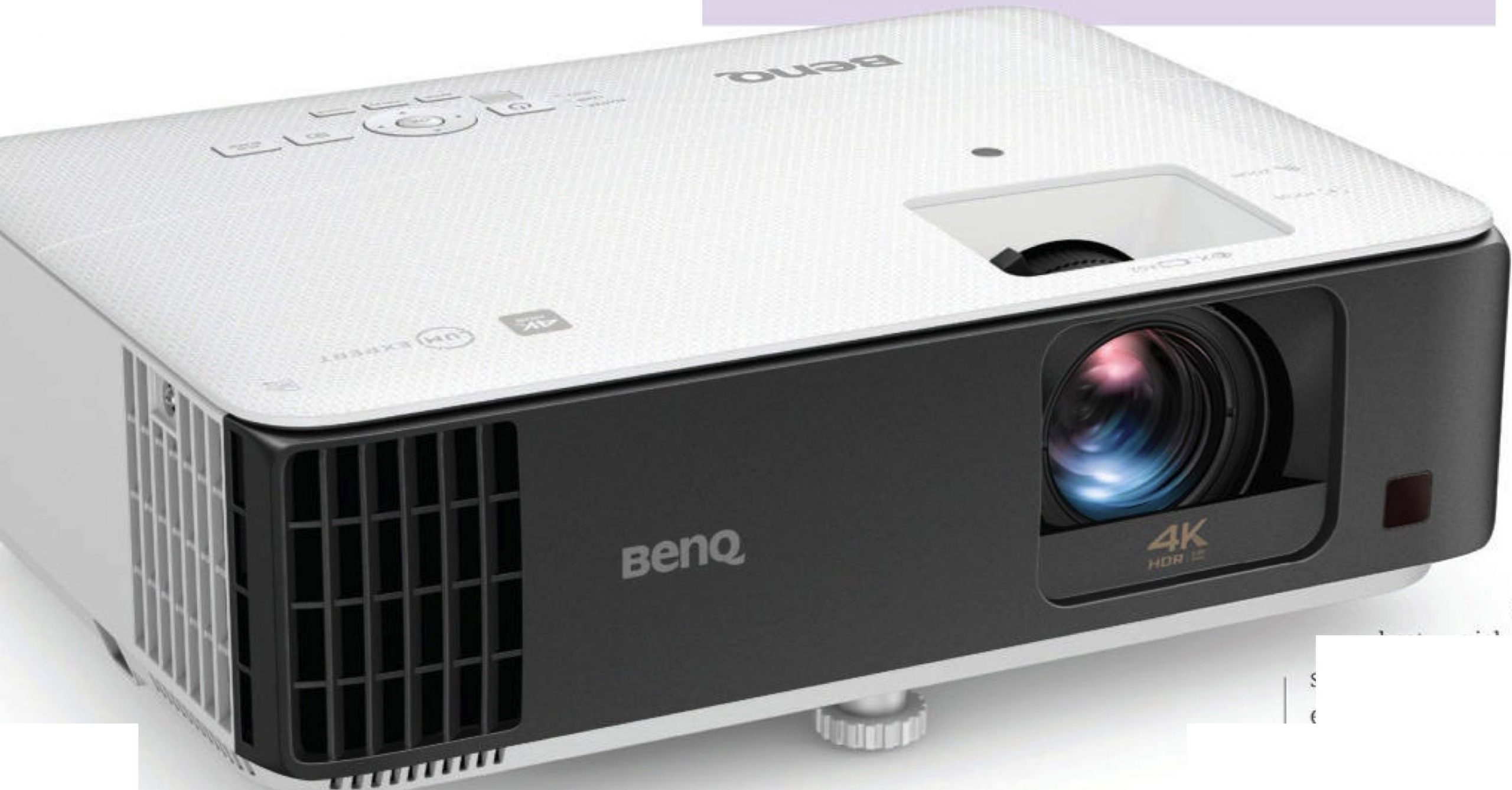 up 24-to-60Hz conversion — but they ran smoothly, with nothing to distract. We loaded BBC Blu-ray documentaries in 1080p/50, and whether jungle pans from David Attenborough or magnificent sweeps across India by Michael Wood, it was only on an occasional zooms or vertical pans that any judder was visible, and given that even the rolling credits ran smoothly up the screen, what we saw was likely cinematographic in origin. This smooth performance remained the case even when we put the projector into Game modes — and it is not the result of clever motion processing, because this particular BenQ projector doesn’t use any. So we were impressed.

The only place judder was prevalent was with 50Hz material viewed from the Android stick — SBS or ABC catch-up shows showed strong evidence of the 50-to-60Hz stuttering we’d been expecting. We suspect the Android stick itself is limited to 60Hz.

There are three ways to listen. You can use the BenQ’s built-in speaker, just the one, in mono, firing from the left side, with 5W of unspecified power. We really couldn’t

I The TK700STi projector delivers what BenQ does best — rich colours, genuine pixel-shifted UHD resolution, smooth playback and easy set-up — here enhanced for gamers. recommend this for entertainment; it’s limited in level, and bass drops off rapidly below 110Hz, which rather takes the impact out of movie soundtracks.

So we’d suggest keeping the internal speaker only for emergencies and ad hoc use, while using an external system to provide sound more suited to a higscreen presentation like this. Your two options for feeding this are the analogue minijack audio output, which is stereo only, or the HDMI 2 input, which is ABC- enabled, so in theory the projector should send the audio from other inputs down an HDMI 2- connected cable to an external receiver or soundbar. Neither a soundbar nor a receiver with which we tried this were able to get sound from the Android stick this way, though BenQ tells us this should be possible. We could, however, do so from the HDM11 input, which is where you’d plug in your games console. But this too is limited to stereo only; BenQ confirmed there is no 5.1 passthrough available here. It’s a shame there’s neither eARC available, which would allow Atmos and surround soundtracks to be extracted from both console games and UHD Blu-ray movies, nor an optical fallback output, which would at least allow 5.1. While many people don’t care about surround, in gaming it can give FPS players a great advantage if they can hear accurately where sniper fire is coming from.

A more conventional connection might be to plug the games console into an AV receiver, then out again to the projector, but then latency will suffer, with that extra HDMI chain introducing additional delay. So if you’re after the low latency of this projector for gaming, you cannot also enjoy surround sound.

The Android dongle here adds a swathe of built-in entertainment options to this projector, though audio playback from that is a challenge, and surround sound impossible. The TK700STi projector itself, meanwhile, delivers what BenQ does best — rich colours, genuine pixel- shifted UHD resolution, smooth playback and easy set-up — here enhanced for gamers with low-latency delivery for a stupendously ‘wow’ bigscreen delivery of 4K gaming.

Warranty: Two years (Lamp: the earlier of one year or 750 hours use)