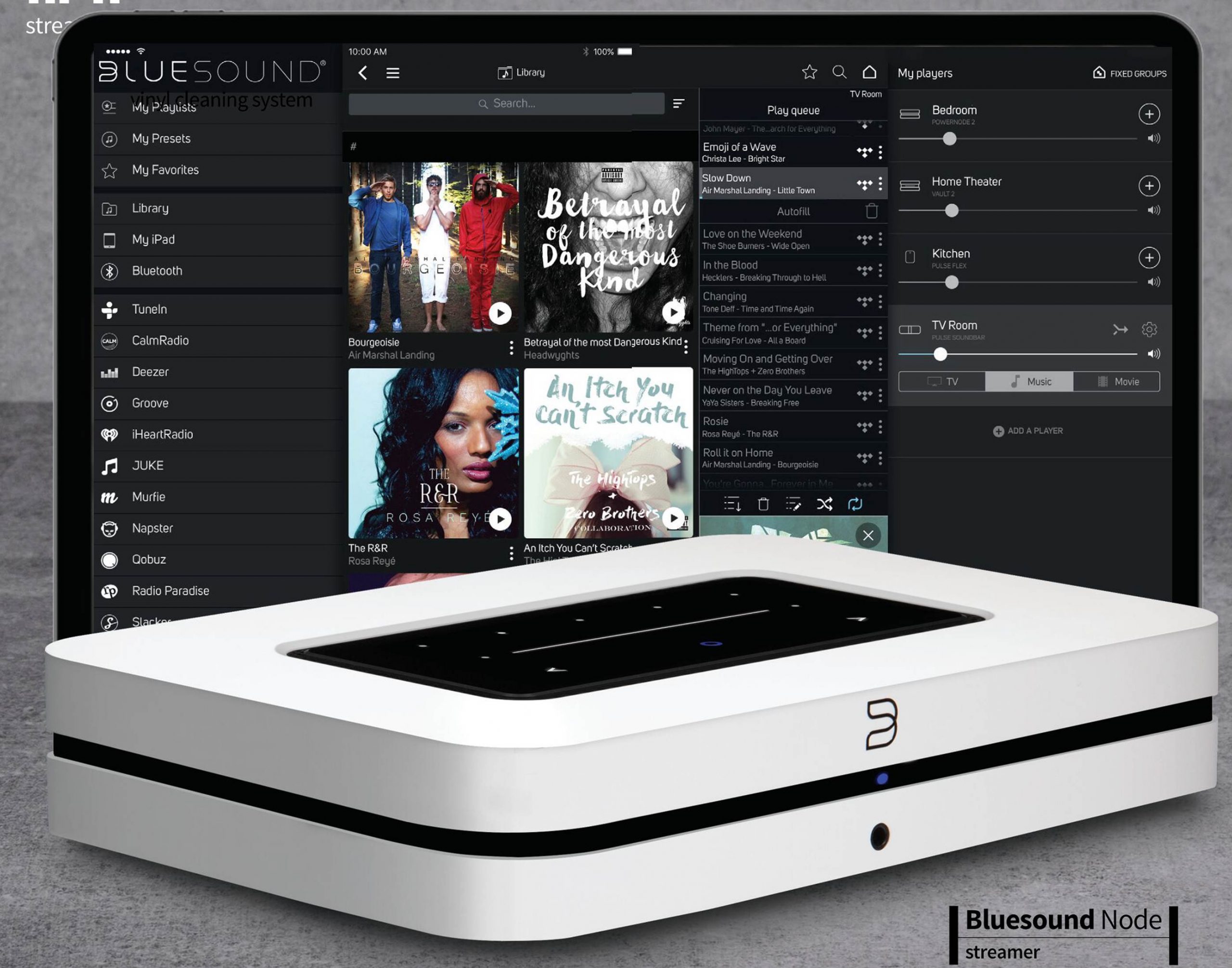 Bluesound is part of the Lenbrook Group of Companies, the Canadian­based group which also brings you NAD and PSB Speakers. And the complementarities between Bluesound and NAD in particular are obvious, and useful. NAD has adopted the BluOS streaming platform from Bluesound for its own smart streaming amplifiers, while Bluesound has gained substance from its stablemate from the very beginning — the great Marty Borish, the founder of modern NAD who passed away in 2017, had early input into the goals for the new streaming brand, and the development of its powered products has gained greatly through successive generations from the expertise of NAD’s amplification engineers. But the Node streamer — here in its third (really fourth) generation — has no amplification; it’s designed mainly to plug into an existing system to bring all the streaming

and file-based joys of digital music. So this is where Bluesound and the underlying BluOS can be judged on its own merits. How well does it handle the not-so-simple task of bringing all the world’s music to your home in an easy-to-use way? (Spoiler: having just won the EISA 2021-2022 Award for Digital Music Player, one might assume the answer to this question is “pretty well”.)

For the new generation, Bluesound is back to calling its streamer simply the Node. There’s certainly no confusing it with the original Node from 2014, because the first generation of Bluesound products had a slightly bizarre styling which put off at least as many potential buyers as it attracted. Node 2 in 2018 calmed things down considerably, looking very much like this one. That was then followed by a series of upgrades which created the Node 2i.

The headline upgrades for the new Node include both operational and sonic enhancements. The touch-panel controls on the top have been given proximity sensors, and now offer access to five presets. More powerful processors within should smooth operation still more, while the DAC design has also been upgraded — still delivering up to 24-bit/ 192kHz audio processing, along with MQA unfolding for playing Tidal’s Masters-quality files at their full quality (assuming you pay for the higher tier of Tidal, and continue to believe in MQA, the utility of which declines with every Moore’s Law rise in available bandwidth — why compress high-res when we now have bandwidth a-plenty to stream such high-res files uncompressed?).

Bluesound’s Nodes have never been much for external inputs — here it retains the single minijack combo input into which you can plug either minijack (ugh) stereo audio or a Mini Toslink (also ugh) optical input. But added to the new Node is an HDMI eARC input — and this transforms the unit’s potential to act as a media hub. Run an HDMI cable to the ARC-enabled input on your TV and the Node can (hopefully, given ARC’s sometimes quirky incompatibilities) receive audio from whatever is playing on or plugged into your TV. eARC is even capable of receiving surround sound, if your source provides it — largely irrelevant here, as the Node is a stereo device, or 2.1 if you add a wireless Bluesound SUB+ or other subwoofer to its physical output. But eARC would be potentially useful on the latest Powernode (which is essentially a Node plus amplifiers), as the Powernode can pair with Flex 2i speakers as rears, so delivering 4.1 surround.

The USB-A slot on the rear can be used for connecting sticks and drives of files — one of the most robust ways to play high-res files to the Node. It will build a semi-permanent library of your albums to display on the app, so you’re not left diving through folder structures, as many streamers still do. You can also link it with networked folders on NAS drives, PCs and Macs — even linking with iTunes/Music libraries on Macs is possible if somewhat less than straightforward, requiring some complex defining of paths. (We forget how every time we review a Bluesound product, and refer back to an old email where someone at Australian Convoy helped us out; we always get there in the end.) File compat­ibility is excellent: MP3, AAC, WMA, OGG, FLAC, ALAC/M4A, WMA-L, MQA, WAV and AIFF, with all high-res capable formats topping out at 24-bit/ 192kHz playback.

The other ‘external’ inputs here are AirPlay 2 and Bluetooth, the latter including the aptX codec for those Android devices which support it, though no mention of AAC for Apple devices which don’t — but Apple owners can use the superior AirPlay 2 anyway. The Node can also send its output via Bluetooth, again with aptX, providing a wireless playback option to headphones, Bluetooth speakers, even Bluetooth-equipped amplifiers and receivers, though we’d recommend cabling if you can, as always.

Other output options are analogue on standard RCA sockets, and digital on a choice of coaxial or optical. We gather that the USB-A slot is also on a promise to provide USB audio output at some time in the future, by firmware update. There are also trigger in/out sockets, and the Node can also be integrated into smart home systems, with full-feature drivers available for Lutron, Elan, RTI, Crestron, and others. It’s also fully Roon Ready if you have a Roon subscription.

The connection to your home network can be Wi-Fi or cabled to the Ethernet socket on the rear, and there a minijack (meh) headphone jack in the middle of the front panel, below the Bluesound logo.

That’s the physical side of the Node — but of course it’s the streaming and the app which are the primary purpose and interface for Bluesound. The app is, and has been from the beginning, in the very top rank of smart streaming controllers, so we got a reassuring feeling of business as usual when we first powered up the Node, hooked it up to our network via the Ethernet cable, and opened the BluOS app on our iPad to find the Node instantly identified as a ‘device’, ready to go.

“the new HDMI eARC input transforms the unit’s potential to act as a media hub, with an HDMI cable running from the ARC-enabled input on your TV…”

From the app you can access local and networked libraries, streaming services and internet radio stations. Designed for high-res from the start, the BluOS platform is also currently the only platform that can support up to 64 players delivering 24-bit audio at the same time! — just on the off-chance you have 64 rooms in which you’d like to do that.

Its access to music services may not quite match the incomprehensible profusion of Sonos, but is nevertheless one of the best stocked among such systems, with out-of- the-box access in Australia to (deep breath) Tidal (including Tidal Connect), Qobuz, Spotify (including free), Amazon Music, Deezer, TuneIn internet radio, Calm Radio, Radio Paradise, iHeartRadio, LiveXLive (formerly Slacker), Idagio, Neil Young Archives, and nugs.net. Should keep you busy.

Naturally, the app also lets you switch between sources, along with other options including tone controls, subwoofer crossover optimisation, and settings to enhance external DAC connections.

For those times when your phone or tablet is dead, you can use the touch-capacitive top panel. From here you can change volume with a swiping action across a slider, skip tracks or initiate one of five pre-allocated presets by tapping small dot and arrow symbols, which thanks to a proximity sensor only light up on

ABOVE: Also available in black. RIGHT: the new set of touch buttons on top have proximity sensors and can now access five user-stored presets directly.

the otherwise-discreet touch panel (pictured right) when you approach it, disappearing after 10 or so seconds.

While there’s no physical remote provided, there is one available — the usual $ RC-1. But the Node also continues the Bluesound tradition of learning IR codes from another remote control, perhaps some leftover remote from a junked product. You can use any key you like to trigger input changes, play/pause, volume, repeat, shuffle and more.

There’s also voice control available, with the Bluesound Node now compatible with Amazon Google and Alexa using the BluVoice skills — still slightly tortuous in the required syntax, requiring you to say things like “Alexa, ask Blue Voice to play preset 1 in the Kitchen”, rather than just “Alexa play preset 1”. If using AirPlay 2 then you can use Siri on the controlling device as well.

While some have noted that an onscreen display would be useful to see what you’re doing if not using the app, we recognise its absence as one of the things that keeps the Node and Powernode as relatively low-cost streaming options — especially given the sound quality on offer.

As for that sound quality, it’s hard to identify any inherent characteristic to the Bluesound Node, as this will depend largely on how you’ve connected it — digitally to an external DAG or amp, or from the analogue outputs to your current system. All those are likely to have more effect on the sonic signature than the Node itself. But via its analogue outputs we can compare the sound with other DACs and streamers, and in that regard we’d describe it as non-clinical, in that it doesn’t sacrifice the music to a deference for detail. Timing was a notable strength — it had an insatiable appetite for rhythms, while it sounded nicely direct, slightly warmer in tone than those

more analytical competitors, and still very much the Bluesound character to which we’ve become accustomed over recent generations.

This was demonstrated by Ludovico Einaudi’s ‘Cinema’ collection, playing from Qobuz. The delicate piano notes of Golden Butterfly drifting from the Node were not quite as sharply edged or spaciously presented as we’ve heard on higher levels of streamers, but the Node nevertheless fleshes out the sound of both this and more densely populated tracks, with a hint of warmth not detracting from a dynamic scrutiny particu­larly at low levels, which revealed not only the notes but the way they are being played.

It seemed appropriate to play Joni Mitchell’s ‘Blue’ on the Bluesound, so we turned to the recently-released short but wonderful anniversary ‘50 Blue (Demos & Outtakes)’ album, which contains some thrill- ingly clean alternate treasures. River (with French Horns) retains the piano fluff on the

third bar but excises the tiny tape wobble on the first note, and while the Bluesound again wasn’t able to relay every lilt of Mitchell’s delivery, it nevertheless soared convincingly beyond its price level with her vocals, and captured the bare atmosphere beautifully.

Getting rather more contemporary, we fed the Node the rhythm of Nas’ The Message and it absolutely snapped into action, throwing itself into the uninhibited beat and tightly knitting it together with the Sting-derived guitar pattern, throwing the ping-ponged vocal sections from side to side with accuracy, and retaining a natural sense of free-flowing dynamics to his main expressive rap. The Node clearly won’t mind if you’re planning a party heavy on the language warnings.

While it’s hard to say that Bluesound has taken the sound here to another level, exactly, there’s certainly a progression to be enjoyed, while the higher level of processing keeps operation smooth, and that new HDMI eARC socket significantly expands the new Node’s application for home entertainment and gaming. You could add a pair of active speakers either side of your TV and enjoy a magnificently minimalist yet high-res and streaming capable system. Meanwhile the BluOS app retains all its loveliness and ease of use. We can see exactly why EISA has recognised it in the 2021-2022 awards — we loved it too, especially as the price remains just under a grand, for high-quality access to all the world’s music, and then some.