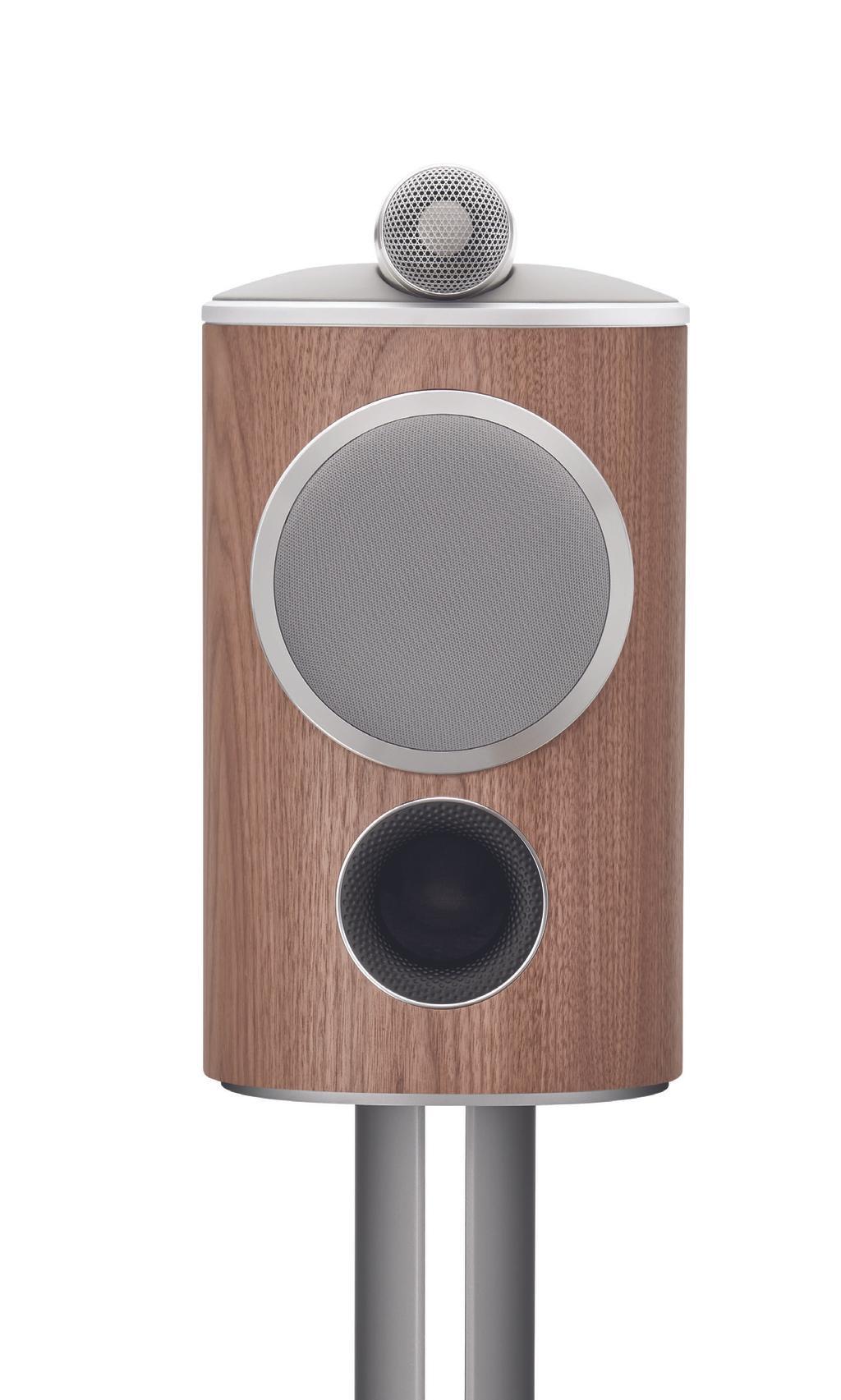 We couldn’t have wished for a more prestigious launch to occur while we assembled our group of standmounts. With great fanfare and a wildly optimistic embargo period, Bowers & Wilkins announced the entire new 800 Series D4 (see also News p9), and we were soon donning the white gloves to unbox this pair of the standmounts from the new 800 series, the 805 D4.

The 805 D4 gets some but not all of the new stuff – there’s no Biomimetic Suspension because the 165mm Continuum driver is here handling both midrange and bass, so that its travel is greater than the new suspension device can (yet) handle. On the other hand it gains perhaps the most radical revamp of all – the complete cabinet reversal that the floorstanders enjoyed with the D3 series. This is what the company calls a reverse wrap, curved at the front around to the solid aluminium rear spine, so reducing the front baffle profile while dramatically increasing the overall rigidity. This also sees the former MDF construction replaced by layers of plywood which are glued and then formed under pressure and heat, and allows crossovers to now be mounted in dedicated spaces on the rear of each speaker, isolating them from internal acoustic pressures while also improving the internal acoustic volume.

The mid/bass drive unit pod is coupled directly through the wooden cabinet into an aluminium plate behind the baffle; this driver also gains a new voice coil and former.

Up top, the diamond tweeter, itself unchanged from the D3 series, nestles now within an all-new rigid, cast-aluminium top section, which replaces the previous wooden version. In addition to improved stiffness, this has been given a smooth-finished ‘Leather by Connolly’ covering in black for the black and satin rosenut finishes, and light grey for the white and satin walnut, that fourth finish (pictured) being new to the whole 800 Series.

While the tweeter itself is unchanged, that Nautilus tube loading is now longer, elongated to around 30cm, with the ‘Solid Body Tweeter’ housing still machined from a solid piece of aluminium. So used are we to seeing this arrangement on Bowers & Wilkins speakers that we forget how unique it is – for example it elicited an ‘Oh, what?’ moment from the missus, though some of her subsequent comments are perhaps best left unrecorded.

This tweeter housing is decoupled from the main speaker body to such an extent that it wobbles slightly if you give it a gentle push; there are now two decoupling points, we gather, and the tweeter’s motor assembly has also been re-engineered “to allow the drive unit to ‘breathe’ more effectively”, says the company, with this and the longer tube resulting in a claimed notable reduction in the resonant frequency behind the tweeter dome.

We can’t tell you what the mid/bass cone is made of, other than it being some woven material dyed silver-white, for this is the mysterious Continuum cone, the secrets of which the company is still keeping close to its chest, a tactic adopted after its earlier yellow Kevlar cones were ripped off by half of China.

Grilles for the mid-bass drivers are provided (pictured far left), but we confess we never took them out of the box. Why hide that mysterious shiny Continuum?

The 805 D4 now has an upgraded FS-805 D4 stand, with additional steel inserts in its base and far thicker M12 floor spikes. Rubber feet for hard floors are also included. Positioning advice is to have them triangulated with the listening position between 1.5m and 3m apart, and at least 0.5 metres out from rear or side walls. The manual does give advice on bookshelf use – use the supplied foam bungs, they say, and make sure your shelves are strong enough!

The twin sets of terminals on the rear aluminium spine are an improved design with enhanced grip for 6mm or 8mm spades, but also taking banana plugs and bare wire up to 4mm. Neat spade-equipped jumper cables come in the box; we listened first with the speakers biwired, then later with the jumpers.

And from the first listen (subsequent to running in by both Sound United and ourselves), one thing was obvious – these are significantly different-sounding speakers from the previous 805 D3 standmounters. There’s a solidity to the sound – a reality, really – that raises them above the performance of the previous generation. The 805 D3s sounded like very good standmounts, notably able to play loud without distress. The 805 D4s hardly sound like speakers at all. Whatever we played, they delivered the music, but also seemed to meld their talents to the source material in question. Play a nominally-thin 80s’ recording like The Teardrop Explodes’ Colours Fly Away through most standmount speakers and it emerges pinched and weedy.

On the 805 D4s it sounded solidly supported by a full bassline, punchy as hell, with the mix problem clearly revealed as an intrusive snare sound and slightly overjangly guitars: a literal revelation. True, we were giving them the benefit of some solid Classé amplification, but when we repeated the experiment with mere 50W Musical Fidelity power amps, they had no trouble repeating the trick.

And the 805s certainly weren’t artificially pushing the bass, because when we played an acoustically pure recording like Chick Corea’s Australia concerto, that piece leapt into the room acoustically pure. This piece generally shows off the dynamic abilities of speakers, but again here there was no loudspeaker trait as such, just the interplay of instruments across the soundstage, and a notable sense of the room acoustic, especially when drummer Marcus Gilmore, his kit curtained off but not acoustically enclosed, is driving along on his ride cymbal. The only time we winced at treble response was the torture test of Dion’s vocal on I Read It (in the Rolling Stone) when played at high volume, but then we’ve no idea why it was recorded this way. This is really the 805 D4s again telling it like it is; there’s no smoothing down the top when you’re dealing with diamond. If you find it a bit much, toe them a little wider than direct.

But listen carefully first; when we thought kd lang’s usually mellow The Air That I Breathe was sounding a bit bright on the left, it was simply because we’ve never heard the chorusending cymbal rolls in that channel delivered so authentically. This track is beautifully layered, and these speakers imparted every nuance, though only once we’d switched from a 128k MP3 file made many moons ago to our more recent AIFF rip. The truth-telling of these speakers made that mistake obvious even before the end of the opening fade-up.

Classical was, of course, handled with the same spread, soundstaging and subtlety as the jazz. And we enjoyed a good few new recordings too – they drove Amyl and The Sniffers’ Choices with suitable pile-driver energy and rhythm, and excelled at snapping out the percussion of park hye jin’s I Need You. They didn’t like one track with particularly monster bass – Tyler, The Creator’s EARFQUAKE, with which they not only lacked the very deepest stuff on the recording, but had their midrange presentation put in jeopardy under the pressures of trying to go too deep.

Given the Abbey Road connections for the 800 Series, we couldn’t finish without some Beatles. Not the modern digital remasters – we loaded the magnificent Australian vinyl pressing of the 1970 ‘Hey Jude’ compilation LP. While we’ve heard McCartney’s bass emerge still more fully from larger and more heavily-woofered speakers, the 805 D4s filled the room with a rich and realistic performance from this fine slice of vinyl; a minor classic like Old Brown Shoe had McCartney’s tripping bass line filling the left channel (a supposed vinyl no-no), leaving Harrison’s nasal and treated vocal with sufficient central space for clarity. So enjoyable was vinyl, indeed, that we spent the rest of the day cranking more.

And that’s the best compliment we can give the 800 D4s – we could have packed them up and returned our larger reference speakers to their rightful position, but the clarity, the rightness and the occasional revelations of the 805 D4s kept us listening. The hype for the 800 Series is always considerable, of course, but they really do live up to the promises.