A hi-fi component streamer designed to complement the rest of Cambridge’s CX Series 2, but which will shine in any system. Read our cambridge audio cxn v2 review.

Cambridge Audio’s CX Series is classic hi-fi made modern, the second of Cambridge’s four ranges of separates — above the recent entry-level AX range, below the 851 series, and looking very much the classic yet modern hi-fi units. With amplifiers at this price it’s all about balancing the right features with the best possible amplification, and Cambridge proved itself in that regard with the CXA81 amplifier from this range, which took out a Sound+Image Amplifier award for its solid Class-AB power coupled with a good set of inputs — although it has no networking, no Wi-Fi or Ethernet, nor any USB-A slot to which you could attach a stick or drive of files. This last omission is likely a byproduct of the first, since file playback needs an app for control, which the CXA81 doesn’t have. You need networking for an app to work.

But there can be an app, because this CXN network player is an obvious partner, as it could be for any similar amplifier. It brings more digital inputs, being loaded with them, as well as delivering hill networking including AirPlay 2 and Chromecast streaming. And the CXN does indeed have an app (which can, via a cable between their control bus sockets, also control the CXA81 amp).

The Cambridge Audio CXN V2 has also kept all the sonic performance that marked out the original version — the same vibrancy and enthusiasm, indicating something of an ‘if it ain’t broke’ approach to the V2 versions. This is true of the build as well, which seems exactly the same as the previous CXN, which is all to the good — it’s a premium quality reflected in the buttons and the recently redesigned remote control, both of which are easy to use and responsive, while the volume dial retains that signature weighted resistance that gives a satisfying sensation when moving through menus or gain levels.

The 11cm screen shows track, artist, album and sampling rate, with album artwork in full colour, streets ahead of a text-only display, and with a design which never feels cluttered, with each bit of metadata spaced nicely. Cambridge is similarly helpful with the bits you won’t be looking at so often — around the back each input label (see the back panel) is printed twice, right-side up and, above the socket, upside down, which is exactly how you need them when you’re peering over the amp to plug something in.

This is not only a streamer; it’s a digital preamplifier as well, with one each of coaxial and optical inputs, a USB-A slot to which can be attached a stick or drive of files, and a USB-B socket which can be connected to a computer for direct playback. This streamer is capable of playing high-resolution files up to 24-bit/192kHz in WAV, FLAC, AIFF and Apple Lossless, as well as lesser compressed formats such as WMA, MP3, AAC and Ogg-Vorbis.

Bluetooth is not built in, but there is a slot at the back for the optional BT100 dongle, which thereby makes it possible, and includes the aptX codec. The reason for this casual approach to Bluetooth may be that there are better ways to send your music. For those on Apple’s ecosystem there is AirPlay 2 to receive music from iPhone, iPad or Apple computers. The Android users who might have defaulted to Bluetooth can instead use the Chromecast capability that sets this version apart from the original. With Chromecast you can stream content from the many compatible apps.

Also unusually, Wi-Fi also requires a dongle in the back, most likely because the quality of casework will block a Wi-Fi connection. The dongle comes pre-fitted, and ‘just works’.

As for outputs, this is the inly the second streamer on our price-ascending journey to offer XLR balanced analogue outputs, which provide higher level and lower noise to amplifiers which have XLR inputs. Otherwise there’s analogue RCA output sockets to plug into any system, and digital outputs on both coaxial and optical sockets, so if you rate the DAC on your amplifier (or have an offboard DAC) you can test it against the Cambridge’s internal skills to see which performs to your preference.

The app through which you can control your music playback is Cambridge’s own StreamMagic, the same app that controls the company’s very top-of-the-line Edge PQ preamplifier. Using the app’s ‘Library’ UPnP playback control to stream files from a NAS drive we confirmed compatibility of AIFF, WAV, FLAG and Apple Lossless to 24-bit/192kHz, with the front panel showing track information and colour artwork where available. Even large libraries loaded their information quickly, a 5000-artist roster loading at the rate of several hundred a second, making UPnP more navigable and so useful a solution than on many other similar systems. We couldn’t get DSD to be recognised from our remote libraries, more likely a UPnP serving rather than a Cambridge receiving issue, as when we plugged in a USB stick, it was happy to play both DSD64 and DSD 128 files.

With Tidal there’s no MQA support for Masters albums, but you could play them 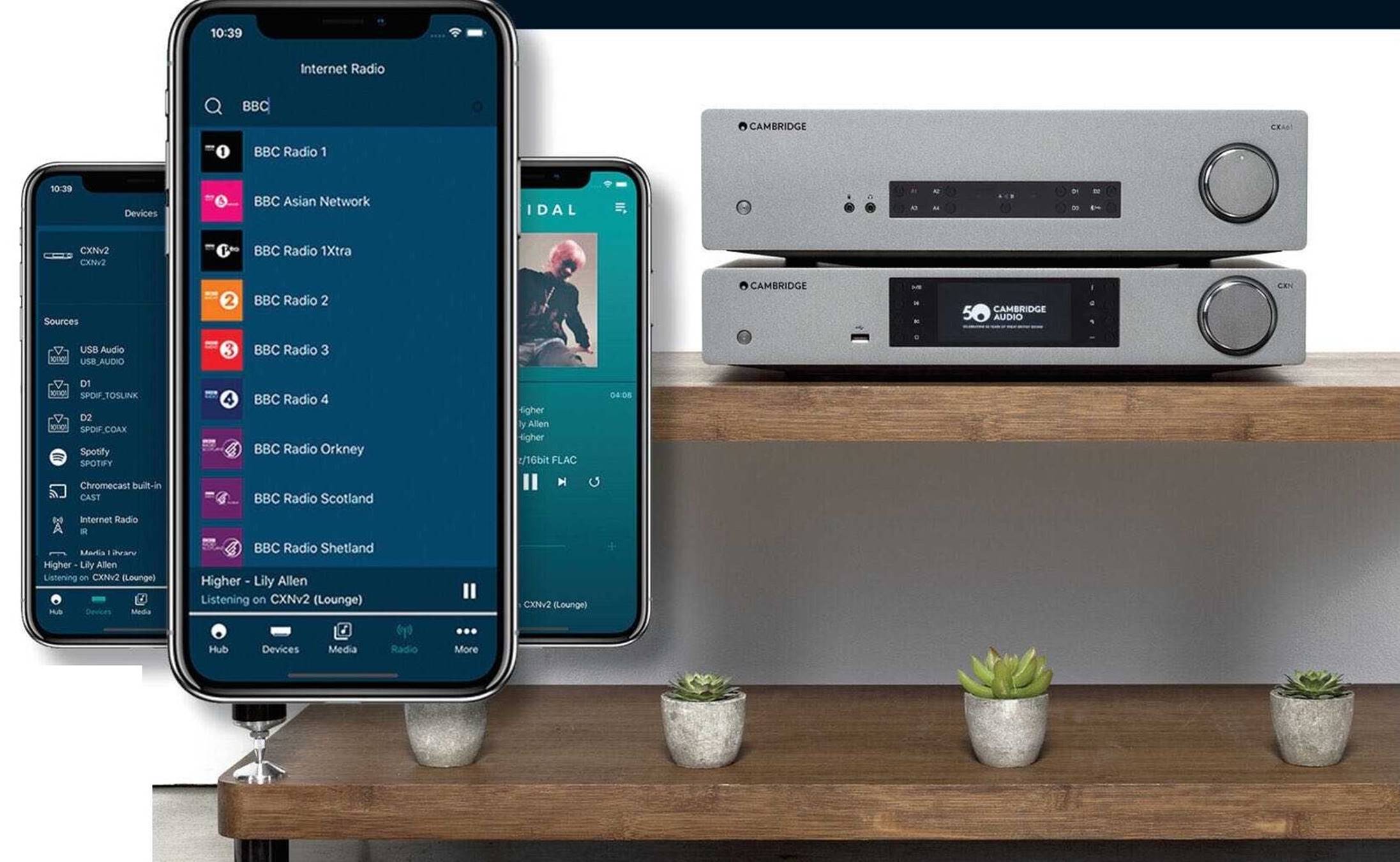 ▲ The CXN V2 network player below the CXA80 integrated amp with which it maketh a perfect pair, although it’ll play effectively into any audio system. Above left is the StreamMagic app used to control its streaming abilities.

on your computer using Tidal’s desktop app and enjoy unfolding to 24-bit/96kHz via the CXN’s USB-B computer playback skill-set.

And the sound quality via every path is delicious. We played Landslide by Fleetwood Mac, and Stevie Nicks’ soulful sweet singing was full bodied and beautifully conveyed. Even the odd vocalisation — the hums, the ‘aahs’ — were detailed and full of melancholy musing. While most half-decent streamers could reproduce the basics of this song, it takes something more talented to dig into the emotional core of this track and deliver it — and that’s what this Cambridge achieves.

With something more bouncy and upbeat, such as Warren Zevon’s Werewolves Of London, the CXN delivers both a punchy bass and a tinkling treble simultaneously. The bottom end emerged weighty but taut enough to give a good kick, while the piano was light and airy without being overly bright.

We played Childish Gambino’s This Is America, a song which overlays a grumbling, rolling bass with the clicks and taps of percussion and a multitude of different voices. Some hi-fi will lose sounds in the turmoil, but the V2 managed to separate each element out and present it as a cohesive whole. No need to keep it simple for the CXN V2.

A fully hi-fi component version of streaming, then, and an excellent performer whether with other Cambridge gear or not.