– No subwoofer included at the price

Canton is only a couple of years off its 50th anniversary, having begun in the early 1970s when four German hi-fi enthusiasts set themselves up in a former village school with the bold goal of producing the best loudspeaker for every taste and every budget. Back in the 1970s, that plan might have envisioned ranges of stereo speakers from entry-level up to a reference range. But as time passed, along came surround sound, architectural speakers, wireless and multiroom products, and of course soundbars. Canton has adapted to and sometimes led each new development with solidly- engineered solutions for every possibility.

Canton has long made both soundbars and soundbases, currently offering a range of ‘sound decks’ and three soundbars — one dumb and two smart, topping out with this Smart Soundbar 10. All three soundbars are listed on the company’s soundbar range page as delivering 2.1 channels, while the product page lifts that to “2.1.2 virtual surround”, while also specifying Dolby Atmos. So what is the Smart Soundbar actually delivering?

One way it quickly shines over nearly all competi­tors is that the Smart Soundbar 10 has not one or two HDMI sockets but four — three ins and one out, and all 4K-compatible.

There’s also Ethernet (as well as Wi-Fi) for networking, both optical and coaxial digital inputs, an analogue input (on stereo RCA sockets, not a minijack), and — most rare — a physical output for an external subwoofer, so if 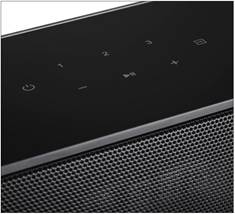 you have any old cabled subwoofer you could use it here, rather than the usual limitation of a specific wirelessly- paired unit — though you can pick Canton’s Smart SUB 8 for that purpose. (Canton describes the bar itself as 2.1.2 whether or not you have a separate sub in operation.) Indeed this soundbar can be flexibly combined with other Canton wireless loudspeakers — with various wireless rears, or with corner-mounted ceiling Canton Smart Soundbox 3 speakers performing Atmos duties, or even with the soundbar becoming a centre speaker between wireless stereo front speakers.

Also under the ‘smart’ banner it has built-in Chromecast, as well as Spotify Connect and Bluetooth, so it’s ready to stream music as well as play movies.

Physically the Smart Soundbar 10 is nearly a metre long and just 7cm high, so it has a good chance of sitting underneath your TV without getting in the way of either the picture or IR remote-control sensor. It’s finished in a smart black lacquer and glass combo, and has a series of touch-sensitive controls on the top. A small but sturdy remote control gives direct access to the playback modes, equaliser settings and wireless Bluetooth, as well as media playback; you get on-screen menus (notably lacking from most soundbars, despite their HDMI connections to the TV), while a small display on the front gives some visual feedback of your selections in the form of blue LED lights.

So what’s going on with the drivers? There are eight in all, driven by a quoted 300W of amplification. Remarkably four of them — all the largest 79mm woofers — fire upwards. The two 19mm fabric-dome tweeters and two 50mm aluminium midrange cones fire forward. Two of the upfiring drivers become Atmos-specific during Dolby Atmos playback to add a greater sense of height. So assuming Canton is counting the other two ‘woofers’ as the 0.1 bass component, the result is a 2.1.2 system with dedicated drivers, not virtualised at all, other than the ‘ghosted’ centre channel. Which is, of course, a good thing. But when you come to adjust channel levels, you find that you are able to adjust also the surround channels — so in fact it aims to deliver 5.1.2, with the rears being virtualised.

Set-up is more complicated than for most soundbars, or perhaps we should call it more versatile, since you get to specify listening distance, ceiling height and device height, as you might with a proper AV receiver, using the on-screen menus. For our money this is preferable to waving an iPhone around in the hope of it guessing your room dimensions in the manner of, say, Sonos Trueplay. As noted you can further fine-tune the actual and virtualised channel levels as if it were a 5.1.2 system, although we found its default levels to be well adjusted out of the box.

Connecting to your network is simple enough and, once set up, it automatically updates its firmware whenever available. Chromecast compatibility makes music playback from personal devices simple, and once the unit is part of your Google Home app, also allows grouping with other Chromecast speakers and a certain degree of voice control via Google Assistant from a separate device (it has no 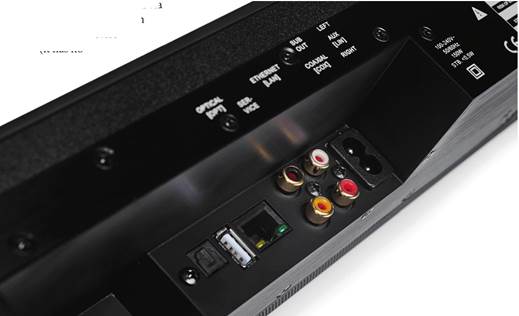 microphone of its own). Chromecast also delivers high-res music capabilities (you could play high-res via HDMI also), along with lesser formats from the likes of Spotify, Tidal, Google Play, Deezer and Tunein over Bluetooth or Chromecast.

From the start, it’s clear that this soundbar offers plenty of scale for what is a modestly- sized unit operating without a subwoofer as standard. Playing the 4K Blu-ray of Alien: Covenant there were deep, forbidding growls as the titles appear, and a nicely open soundstage as Peter Weyland activates David. Everything from David’s bare footsteps to the sounds of the Steinway concert grand piano were cleanly delivered, with the reverb from the empty white room clearly audible.

Busier action sequences could get a little confused, however. While there were some worthy spatial effects in Alien: Covenant as the lander-craft flies overhead from left to right trying to shake-off an alien, the big, deep noises of the thrusters dominated the delivery, masking some of the rest of the audio, and the fine detail in particular. This tonal bias towards bass sounds could all but consume dialogue and on-screen actions — a snarling alien or a cable being winched.

This slight murkiness was compounded by a dynamic flatness which, to be fair, is a trait of many soundbars. It was particularly notable here with music, for which the stereo and music modes should be selected to avoid the swampiness added by all the non-stereo drivers being pressed into action; once so clarified the Canton could serve quite happily as background listening, though we wouldn’t suggest you use it as your main music system.

At this price, we’d say that the sonic abilities of the Canton Smart Soundbar 10 were exceeded by others in our group — notably the LG, Samsung, Sonos and Yamaha soundbars, which could deliver a similar level of power (especially those with subs included) but with better dynamics and clarity under pressure. But we applaud Canton for being unusually literal with its figures for a channel count of 2.1.2, even though adjustments are offered for 5.1.2 channels — compare that to, say, Sony, which veers more to the fanciful. This is 2.1.2 with nothing virtual about it, and expandable to a far bigger (and no doubt more capable) system by adding other Canton smart speakers. Even alone it certainly lifts with Dolby Atmos material, and will open up the breadth and height of your TV sound, while offering a good selection of smart network streaming abilities. 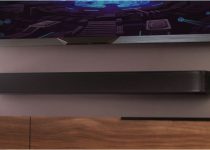