From the science city of Erlangen in Bavaria comes this German turntable, which is out to prove that high-quality vinyl replay needn’t come devoid of convenience features. Read our Clearaudio Concept Active Review. 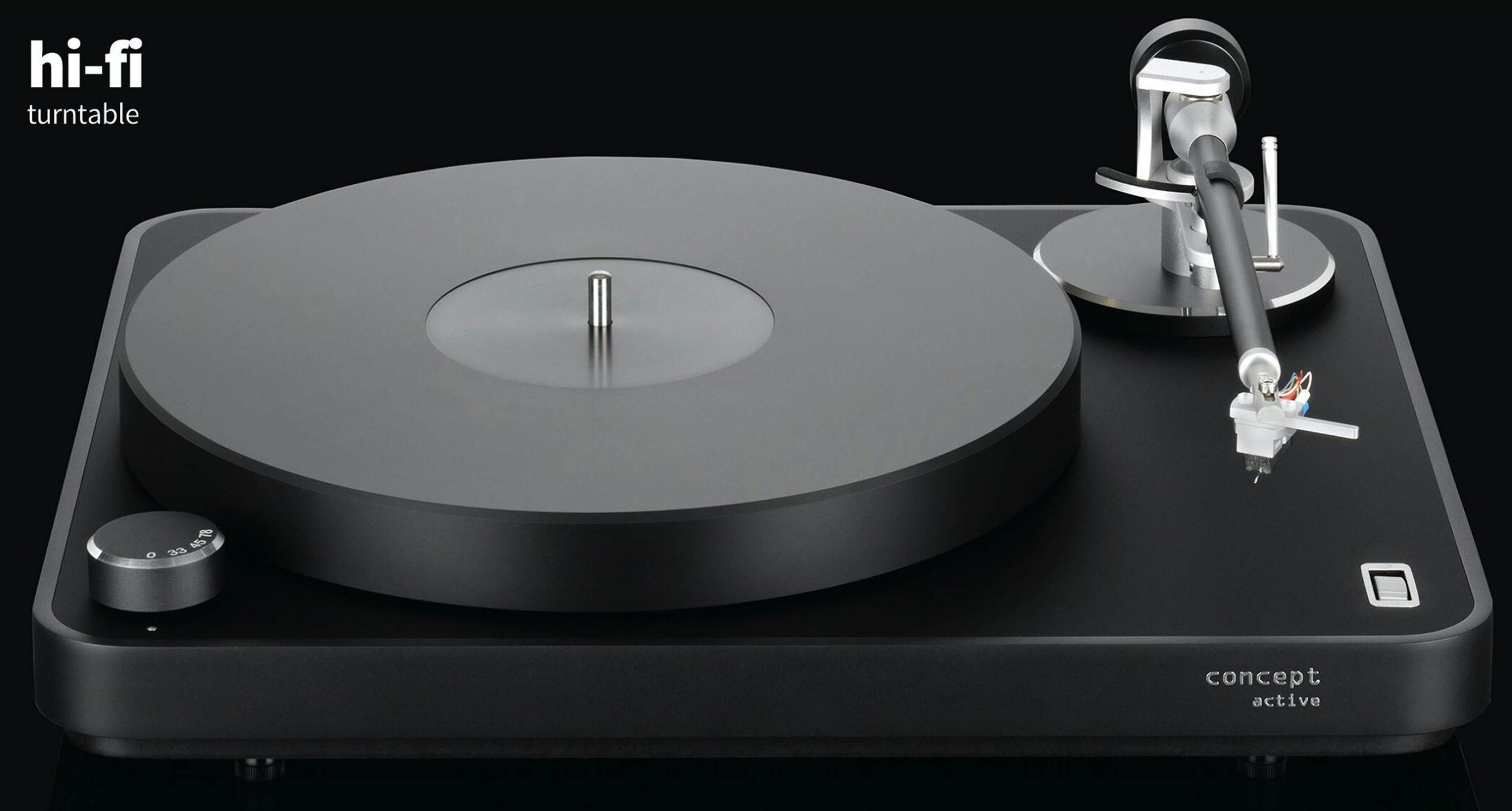 It is a curiosity of the turntable market that often the more you pay, the less you get. Down at the entry level, the hands of vinyl newbies may be held by such conveniences as automatic operation, where the arm is mechanically dropped onto the spinning record and lifted again at the end. There may be a phono stage built-in, so such decks can plug straight into any amplifier without the complications of an external phono stage. In recent years the turntable zone just above entry-level has been ablaze with new bonus offerings — being able to plug into a computer to record your vinyl, or to stream from the turntable via Bluetooth.

But if you decide to make the sensible investment in a higher level of vinyl replay, such facilities rapidly disappear from view. Minimalism is de rigeur with such decks de luxe. Automatic operation is right out, deemed to put all manner of strain on the arm which may interfere with its accurate tracking of the groove. And generally you’ll want an external phono stage, because of the advantages of separating the delicacy of such low-level signal processing away from potential mechanical and electrical interference. You want to change from albums to singles? You’ll probably need to remove the platter and shift the belt onto another pulley.

Vinyl listening is all about the tactile experience, after all!

So all credit to Germany’s Clearaudio for going higher up the market with a turntable that is essentially plug and play, with built-in phono and preamplifier stages, plus something of a rarity among turntables, a useful headphone socket at the front of the right-hand edge. Having a headphone socket by necessity requires a volume control, something not normally present on a disc spinner, but there it is at the deck’s front right corner — not a knob but a scrolling thumbwheel with which the headphone level can be ramped up and down.

That also enables an additional output for this turntable. You not only get the choices of line level (using the Concept Active’s own internal phono stage) or phono level (for a standalone or amplifier phono stage), there is a third option — variable line-level output under the control of the volume thumbwheel. You could thereby plug this turntable straight into a power amplifier, or into any normal system with an additional degree of local control (though in general hi-fi terms, having multiple volume controls in a system isn’t ideal, and if you do, keep the first ones in the chain up to full and use the last one for volume control).

Rather than offer multiple output sockets for these options, the choice of output is governed by one of the four rather sexily solid toggle switches on the back of the turntable, specifically the last of the four, a three-position switch labelled ‘RCA output’. The other three toggle switches offer a switchable subsonic filter for the internal phono stage, a ‘mode’ switch between moving magnet and moving coil cartridges (input impedance of 47kohms or 110 ohms respectively), and lastly a three- position ‘gain’ switch which should be set to ‘low’ if you have the moving-magnet Concept MM V2 cartridge that was fitted for our review, or ‘high’ if you’ve taken the upgrade option of the moving-coil Concept MC.

Speed is factory set but fine speed adjustment is possible, just under the rear product label.

The final switch is the knob front left of the turntable, which electronically switches between the main speeds of 33V3, 45 and yes, even 78rpm.

So whether you’re enjoying the quality of the rear toggle switches or admiring the deck in general, this is clearly no entry-level turntable. It shares the high-quality construction of Clearaudio’s less adorned standard Concept turntable (which offers no phono stage, no headphone output) in having a carefully resonance-optimised body with a core of medium-density wood fibre within an aluminium surround (or a wood surround, in the attractively stratified wooden edition), plus a final upper layer incorporating a high-tech satin-finished synthetic polymer.

The platter is 30mm thick, made of precision-milled polyoxymethylene, an engineering thermoplastic, sitting on an aluminium subplatter and a polished tempered-steel shaft in a sintered-bronze Teflon-soaked bearing.

The DC motor is fully decoupled and resonance- damped, driving the subplatter via a flat belt.

The tonearm is Clearaudio’s “innovative, frictionless, magnetic-bearing Concept tonearm”, which is a good mach at the asking price, though Clearaudio does have higher-level arms which might provide an upgrade path in the future.

There is another upgrade option in addition to the cartridge choice. The Concept Active comes as standard with a 12V wall-wart power supply, but we had at our disposal Clearaudio’s optional Smart Power Supply 12V (an extra

$1495), which is a battery-equipped unit delivering cleaner power to both the motor and the onboard phono stage. It’s a stylish match for the turntable available in black or silver, and though pictured (below left) to the right of the turntable, that position would block the headphone output, so plan for it to sit on the left (or significantly further away, which would be no bad thing).

Like the standard Concept turntable, the Active doesn’t ask much of its new owner — remove the protective packaging, attach the drive belt around the sub-platter and motor pulley, place the platter on the spindle. The Concept MM V2 cartridge is attached to the magnetic bearing Concept tonearm at the factory, with everything from tracking force to anti-skating bias set during the manufacturing process. Clearaudio advises only that you use the supplied level gauge on the platter to ensure everything is level, which can be adjusted by turning the deck’s adjustable feet can’t remedy. And secondly to check the cartridge’s tracking force is 2.4g, though no tool is provided for this. Ours arrived dropping 2.5g.

The Concept Active wasted no time demonstrating its sonic elegance and sophisticated delivery. We played side four of Pink Floyd’s ‘The Wall’, and The Show Must Go On and In The Flesh emerged with gratifying clarity and cleanliness. This is a precise-sounding deck, and tonally neutral, but not overly stark, rather pleasingly solid with a fullness that here lapped up the

backing vocals; its weight supported Nick Mason’s most impactful strikes in punching through the mix, while Waters’ theatrical storytelling stung forth clear above the mix. The non-Active Clearaudio Concept’s talents of pace, tautness and precision are fully retained here.

Adding the power supply (its integrated cable connects to the Concept Active’s power socket) did make a significantly audibly difference — cleaner, fuller and more solid, more subtle in the detailing too. That is a significant investment, though, and if you don’t already have a standalone phono stage, funds spent there to bypass the Clearaudio’s internal stage might be the better spend. Or, if you can stretch to it, consider both!

One caveat from this fully-featured package was that the headphone output somehow lacked the best of the quality emerging from the main outputs, plagued by a bit of muddiness. But we appreciate its convenience, and we still like the inclusion of that volume control!

The extra integrated features here appeal to those after a straightforward, all-in-one record-playing solution. Sonically you might well do even better with the standard Clearaudio Concept plus a good external phono stage and a dedicated headphone amp attached to that. But the point here is the added convenience, rather than such extra boxes. And in that regard the Clearaudio Concept Active certainly delivers, and offers multiple upgrade paths for the future.