It may seem strange that Corsair hasn’t had extensive repertoire of air coolers to match its liquid cooler range, but the company did actually try a while ago, with mixed results. This month, though, it’s most definitely back in the air-cooling game with the A500. It’s a monstrous dual-fan cooler, which aims to offer premium air cooling and a hefty amount of overclocking headroom. 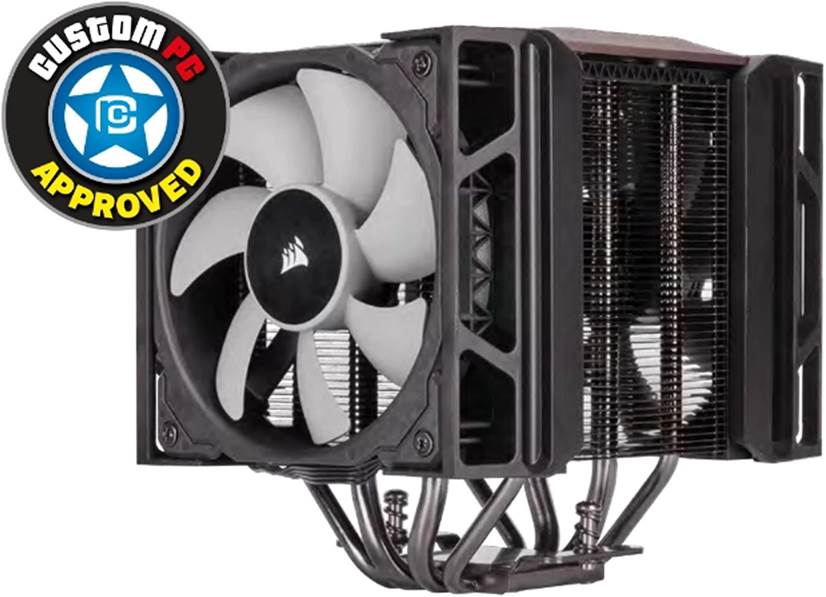 This massive cooler’s measurements stretch to 169mm long and 171mm tall, with the latter measurement meaning you’ll need to pay careful attention to your case’s CPU cooler height limit, as many cases won’t be able to accommodate it. It also weighs close to 15kg, so you won’t want to drop it on your foot either.

The box is enormous too, but inside there’s no mass of cables for hooking the A500 up to your PC via USB, nor RGB lighting controllers. In a rare moment for Corsair, the cooler is devoid of lighting or any fancy software control. You get a few accessories in the box, though, such as a splitter cable, which allows you to power both 120mm ML-series fans from a single 4-pin header, as well as a long-reach screwdriver and tube of thermal paste. You won’t need to use the latter right away, as the contact plate comes with a layer of pre-applied thermal paste, but its good to know you won’t need to buy more paste if you upgrade your CPU.

The rest of the kit includes the cooler’s simple mounting mechanism Plates are fixed to the cooler, and they sport sprung thumbscrews, which attach to threaded pins on additional plates that you secure to your CPU socket. These thumbscrews sit underneath the enormous central heatsink, but there’s has a cut-out section inside the heatsink that allows the included screwdriver to find its way down to secure them. The cooler itself actually looks very attractive too, with a high-quality removable metal cap on top of it, which hides the heatsink cut-out and heatpipe tops, but also includes a vent in the top to allow the rear fan to breathe.

The installation process is quick, whether you’re using the A500 on Intel’s LGA1151 or LGA2066 sockets or an AMD Socket AM4 platform. Neither Socket TR4 or TRX40 are supported, but all LGA115x sockets are covered, as are all AMD sockets back to FM1 and AM3, as well as both of Intel’s LGA2011 sockets.

Corsair claims that the A500 has a 250W thermal design power (TDP) cooling capacity, which would be enough power to handle any CPU up to Intel’s 18-core models. A lot of this cooling power comes down to the fans, which 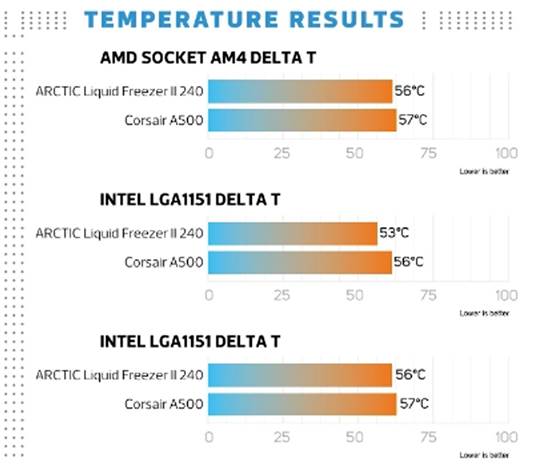 can reach an ear-splitting speed of 2,400rpm at full speed. Interestingly, though, Corsair has also opted for both 6mm and 8mm heatpipes with the A500; the company claims this adds the ability to deal effectively with CPUs with both low and high TDP. There are four heatpipes in total, and they all make direct contact with the CPU.

With such a huge width, you’d be right in thinking the A500 would foul your motherboard’s memory slots. However, in a very clever bit of design, Corsair has added a slide-and – lock fan mount mechanism, where the fans are mounted in sliders than can be raised or lowered to cater for different memory heights. It’s an essential move, too, because Corsair’s Dominator and Vengeance memory modules are some of the tallest on the market. At some heights, however, the fans can end up with some of their blades sitting above the heatsink, reducing airflow through it.

The fans can be detached from the brackets too, should you need to replace them or use other models. Each bracket can also be removed separately, and it’s much easier to deal with these brackets for mounting your fans than the usual metal fan clips.

At full speed, the fans certainly aren’t quiet, hitting rather unpleasant noise levels and with a raspy tone. However, if you use PWM control, they can fall to 400rpm, and at this speed, they were inaudible outside our test system. We tested the A500 in our revised test systems this month, with ARCTIC’S Liquid Freezer II 240 being the other cooler we’ve included in the new results. It’s a worthy comparison, because like any large, expensive air cooler, it needs to perform similarly to all- in-one liquid coolers to be worth it The A500 has a tough task too, seeing as it costs around £ more than ARCTIC’S latest 240mm all-in-one liquid cooler.

In our AMD Socket AM4 system, where the A500 was dealing with a Ryzen 7 1700 overclocked to 3.9GHz using an MSI X470 Gaming Pro Carbon AC motherboard, both coolers performed the same, with just 1’C between them. Moving to our overclocked Core i5-9600K system with a manual all-core overclock to 4.8GHz using an Asus ROG Strix Z370-E Gaming, we saw more of a difference. Here, we saw a 53′ C delta T for the liquid cooler and 56 C for the Corsair A500, admittedly with higher noise levels on the Corsair cooler. 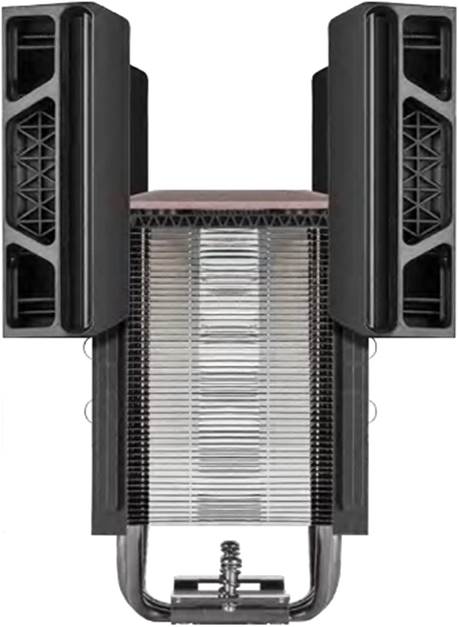 The Corsair A500 is a welcome addition to the large selection of air cooler offerings already available, especially with its innovative approach to avoiding tall memory modules. Its very well made, it looks good and its easy to install. Best of all, it also kept up with a 240mm liquid cooler in all our tests, all but matching it in two of them.

It does cost more than the ARCTIC liquid cooler, but it also comes with two expensive fans and is a product that ultimately feels more premium. The only fly in the ointment was that, at full speed, the fans were far noisier than those on the Freezer II 240, while the cooler didn’t offer better cooling. However, if you’re not too fussed by fan noise, or if your CPU will rarely be hitting the limiter, we can definitely recommend the A500.