Most high-end all-in-one (AIO) liquid coolers won’t leave you with change from £ these days, especially RGB-equipped ones. Corsair’s H115i RGB Pro XT is well on the way to costing the same amount as a full custom loop, but we can’t deny that having a 280mm software-controlled, RGB lighting- equipped all-in-one unit is an attractive proposition, especially from a simplicity point of view.

The H115i RGB Pro XT is compatible with all current CPU sockets, and it has a redesigned cold plate and micro-skived copper channels. It’s a USB-controlled unit, so you’ll need a spare USB 2 header to hook up to the pump. The pump has two 4-pin fan connectors to power the two ML140 magnetic levitation-bearing fans, and as these fans aren’t RGB- enabled, there aren’t too many cables.

The top of the pump is the only place you’ll find RGB lighting, and the 16 LED digitally addressable LEDs can be controlled individually. The lighting effects are extensive and you can create your own effects too, with full control to all 16 LEDs, which can synchronise with any other Corsair components, with support for some motherboards too.

As this is done using software, there are no additional cables for the lighting, which is great news.

The fans spin at up to 2,000rpm, which isn’t in the same league as some of Corsair’s 240mm AIO liquid coolers, but their larger size area means they can shift more air, and the radiator has a greater surface area too. This should mean you get decent cooling with less noise, although we’ll be paying close attention to pump noise too, as this can often be the downfall of AIO liquid coolers.

The installation kit is relatively concise, with socket pins and thumbscrews for all sockets except AM4, where the cooler uses clips that hook up to the stock mounting mechanism. This is very easy to use, but lacks a sturdy four-point mount, which we’ve seen affect cooling in the past.

The cooler includes separate mounting plates for AMD and CPU sockets, which slide onto the pump, but installation is painless on each socket. As usual with most AIO liquid coolers, there’s no thermal paste in the box, as this has been pre- applied to the cold plate. If you need to upgrade in future, you’ll need to buy some, as this paste only lasts for one installation.

Meanwhile, the radiator has a reasonably dense array of fins, but its compact and only 27mm thick, so it should fit into most twin 140mm fan mounts. Should you wish to add fans to the other side of the radiator for a push/pull setup then Corsair has also included an extra set of screws. 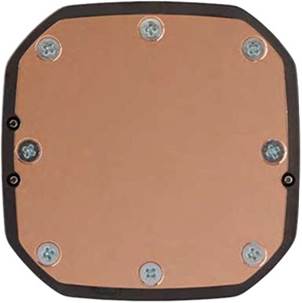 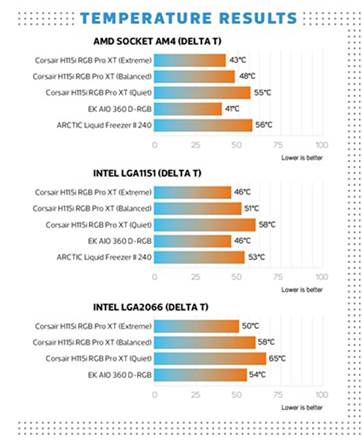 Then we come to Corsair’s iCUE software, which is quite polished these days and the cooler was detected over USB instantly after installation. Out of the box. you can select from Quiet, Balanced and Extreme profiles, and apply them individually to the pump and fans. Interestingly, both areas impacted cooling ability, with the Extreme pump setting offering a speed of 2,600rpm and dropping the CPU temperature by several degrees compared to the 1,900rpm Quiet profile on our LGA2066 system, with the fans also running on the Quiet profile.

The H115i RGB Pro XT’s temperature input is set to an internal source so, much like a DIY water-cooling system, it’s the coolant temperature, not your CPU temperature, that dictates the pump and fan speeds. There’s less coolant involved here, though, which explains the noticeably higher temperatures when using the Balanced and Quiet profiles, as the fans and pump take longer to respond. However, if you create a custom profile, you can instead synchronise the speeds to your CPU temperature, or simply tweak the response curves to your liking.

Thankfully, the pump only made a slight whine at full speed, but we recommend opting for a peak speed somewhere between the Balanced and Extreme profiles, as the former was noticeably quieter and only a degree or two warmer under load. We also recommend ramping up the speed a little quicker too, especially on HEDT CPUs.

We tested the H115i RGB Pro XT at all three speed profiles, and there’s a significant different between them. This, as we’ve mentioned, was due to both lower pump and fan speeds. For instance, the CPU delta T rose from 43’C to 55‘C in our Socket AM4 system between the Extreme and Quiet profiles in our 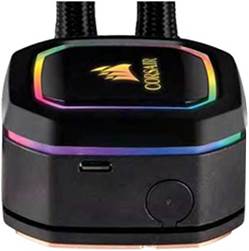 ten-minute stress test, although the latter was still enough to beat the ARCTIC Liquid Freezer II 240. However, the EK AIO 360 D-RGB was better still, albeit with slightly higher noise levels with its fans and pump at full speed.

The EKWB AIO 360 D-RGB and H115i RGB Pro XT managed the same 46’C delta T when dealing with our overclocked Core i5-9600K, but the Corsair cooler added a hefty 12*C under its Quiet profile, where the ARCTIC Liquid Freezer II 240 was slightly better.

Finally, in our new overclocked Core i9-9980XE system, the H115i RGB Pro XT was noticeably better than the EKWB AIO 360 D-RGB. Again, though, switching to the Quiet profile saw a massive 15 C added to the load temperature.

It’s clear that both pump and fan speed are important factors with the Corsair H115i RGB Pro XT, but while its Quiet (and to some extent its Balanced) profiles only offered similar cooling to the likes of the much cheaper Corsair A500 and ARCTIC Liquid Freezer II 240, if you allow the H115i RGB Pro XT to stretch its legs with slightly higher speeds, it’s far more powerful and very quiet at low to medium loads.

The same is true of the similarly priced EKWB AIO 360 D-RGB at lower speeds, which has an even bigger radiator, plus RGB fans, and you can control it easily from your motherboard. However, the H115i RGB Pro XT is a superb and powerful AIO liquid cooler for the money, and it can cope with overclocked HEDT CPUs. It’s a great choice if you need plenty of cooling power, but aren’t quite ready to jump into DIY watercooling.