CyberPower’s Infinity X119 GT rig includes an Intel Core i9-11900K, which is one of the beefiest new Rocket Lake-S chips – it has eight Hyper-Threaded cores, and its base speed of 3.5GHz can ascend to up to 5.2GHz using conventional turbo and 5.3GHz with Intel’s Thermal Velocity Boost tech if the thermals allow it. Read our CYBERPOWER INFINITY X119 GT Review. 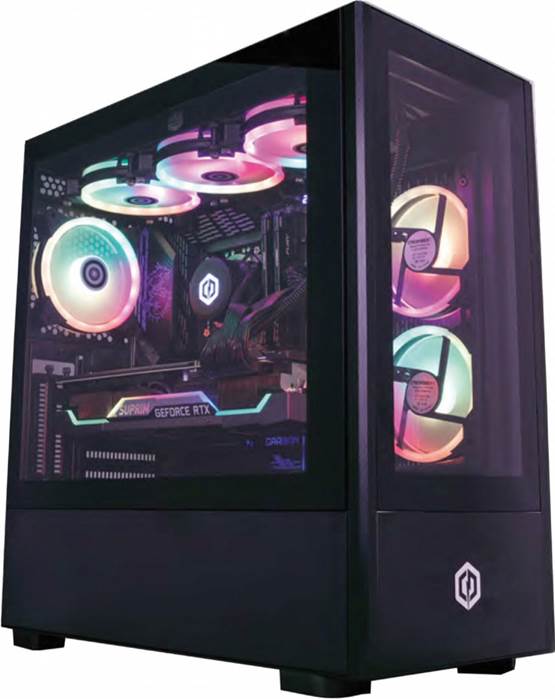 It’s a muscular processor, and it’s paired with an MSI Ge Force RTX 3080 graphics card. The Su prim X branding means the GPU has three fans and plenty of RGB LEDs, and its stock boost clock of 1710MHz has been significantly overclocked to 1905MHz.

Those core components are a great start, and the rest of the CyberPower’s specification is reasonably impressive. There’s 16GB of 3200MHz memory, a 500GB Samsung 980 Pro PCI-E 4 SSD and a 2TB hard disk. Power comes from a semi-modularCorsairTM750M with 80 Plus Gold certification. We only have minor qualms – at this price, a fully modular PSU and a larger SSD would have been welcome, and afforded this machine a little more versatility.

Meanwhile, the MSI Z590 Gaming Carbon Wi-Fi motherboard provides loads of versatility thanks to a range of high-end features – it has Realtek ALC4080 audio, 2.SGbps Ethernet, dual-band 802.llax Wi-Fi and a POST display. It impresses in more conventional departments too, with loads of on-board connectors and ten USB ports at the rear, including a rare and super-fast USB 3.2 Gen 2×2 Type-C connector. There are three M.2 ports, which is a generous allocation, although only one of them supports PCI-E 4. The MSI board looks the part too, with bold dragon designs and plenty of RGB LEDs.

A Lian Li Lancool PC-008 chassis holds all of this hardware, and it’s an exclusive model that Lian Li builds for CyberPower. It makes a big first impression, with tempered glass on the side and front panels, plus six RGB LED fans scattered throughout the chassis and glowing with bright, circulating colours.

The radiator for the mighty Cooler Master Masterliquid 360mm cooler sits in the roof and doesn’t block any of the motherboard, cable tidying is solid and build quality is consistently good. There are also pairs of 2.Sin and 3.Sin drive bays, and a fan controller box around the rear. The only minor issue is that the large graphics card and PSU shroud make it quite challenging to reach the bottom of the motherboard.

Finally, CyberPower protects this PC with a five year labour warranty including two years of parts coverage, which is more coverage than many companies provide.

The overclocked Ge Force RTX 3080 will play most games reasonably at 4K, averaging 53fps in Assassin’s Creed Valhalla and a massive 214fps in Doom Eternal. If you enable D LSS, it can even cope with ray tracing on High in Metro Exodus, with a 99th percentile result of 41fps. It starts to struggle with the demanding Cyberpunk 2077 at Ultra settings, but even then, it stays above 30fps.

If you’re gaming at2,560 x 1,440 then this machine is superb, staying above 60fps in Cyberpunk 2077 and even averaging 79fps with High ray tracing enabled in Metro Exodus. Meanwhile, its average of 360fps in Doom Eternal shows that this machine can really churn out high frame rates on less demanding titles – great if you have a monitor with a high refresh rate.

This compares well with the Ultra 9 XT system we reviewed previously, which now costs £2,825 inc VAT and uses a Radeon RX 6800 XT and Ryzen 9 5900X. This Intel and Nvidia-powered machine is faster in three of our games and only fell behind in Assassin’s Creed Valhalla.

The situation is different in CPU benchmarks. Make no mistake: the Core i9 chip is very fast, with a slight lead over the AMD Ryzen 9 5900X in our single-threaded image editing test and offering enough speed and cores to run almost any 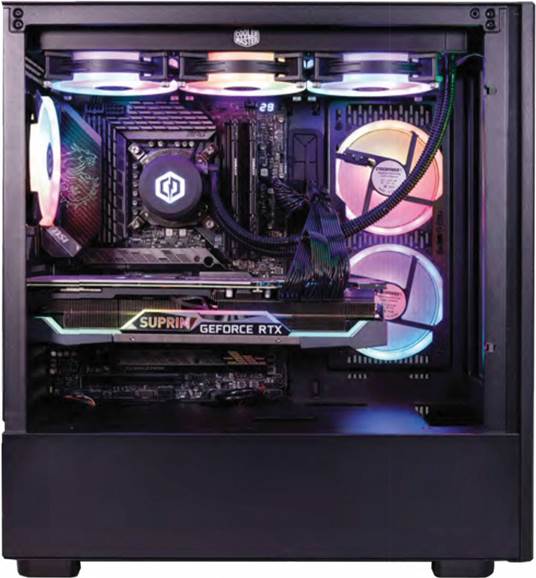 content-creation task. It’s slightly better for gaming than the AMD silicon too. This machine’s performance is also bolstered by the SSD’ s superb read and write speeds of 6,782MB/sec and 3,889MB/sec.

However, the Ryzen 9 5900X-based machine was more than 300,000 points quicker than the Infinity X119 FT in our heavily multi-threaded video encoding test. The Ryzen 9 5900X is undoubtedly a superior choice for demanding workloads, although it’s difficult to find at the moment and the Intel chip will get the job done no matter what the task is.

The CPU, its 360mm cooler and the CyberPower’s six RGB LED fans also contributed to plenty of fan noise. The noise is consistent from this machine and it’s always pretty loud – certainly louder than most PCs at this level. The CPU delta T of 77°C is high too, and the chip’s speed peaked at 5.1GHz and 4.8GHz in single and multi-core benchmarks, so it’s not quite able to attain its peak turbo speeds.

While Intel’s latest Core i9 CPU can’t match AM D’s Ryzen 9 chips in certain tasks, it’s extremely fast and the RTX 3080 is a rapid GPU that can cope with ray tracing much better than AM D’s equivalents. Buying a PC such as this one is also one of the only ways you can get hold of this GPU at a non-silly price right now. The motherboard is excellent, the case is well built and the spec list is solid. All told, this PC is ideal if you want a fast, well-balanced unit- it’s just a shame about the fan noise.

Fast and well built with a superb spec list, although be warned that it also makes a fair bit of noise.