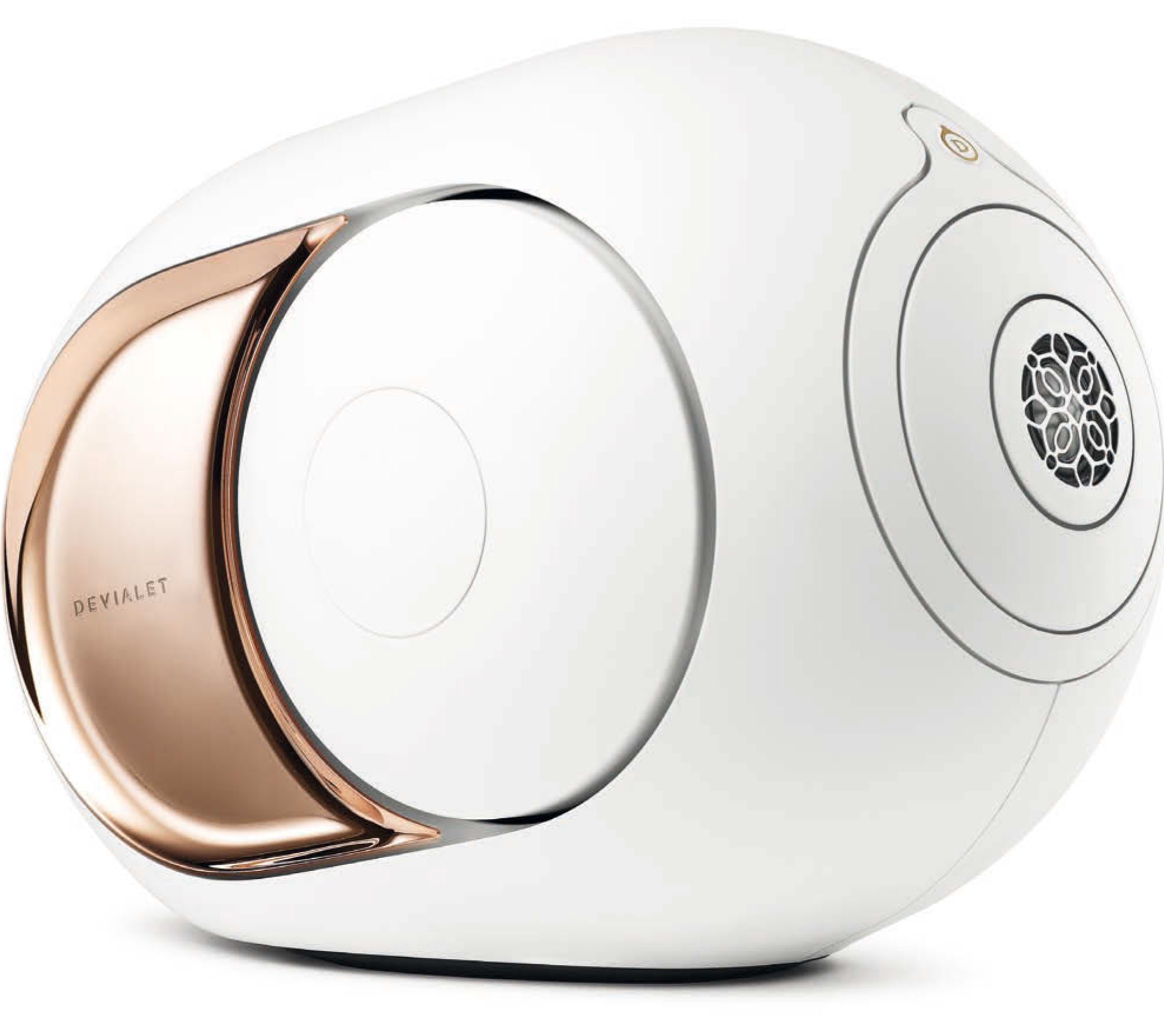 Although Devialet has branched out into other aspects of audio (including most recently… earbuds), the hi-tech French company is perhaps best known for its Expert Pro amplifiers and its Phantom wireless active loudspeakers. This last has been the subject of some substantial change, with the development of the smaller Phantom II system. However; there’s still a lot of mileage in the original Phantom I, especially as it has received a substantial boost lately.

It’s worth going over a bit of Phantom history first. Devialet announced the original Phantom in 2014 and by 2016 there were three versions (standard, Silver, and Gold), these were beefed up again in 2017 and once more in 2020. Recently they were joined by a smaller system (originally called ‘Premier’ and ‘Reactor’, but now known as Phantom I and Phantom II) and ►

“The sides of the Phantom expand and contract like a beating heart, so ‘Heart Bass Implosion’ isn’t too far of a descriptive reach.”

► both lines feature different models that provide more power and higher SPL levels as you go up the range. In both lines, the tippity-top of the range is the Opera de Paris, but there’s an otherwise identically specified and – and a bit cheaper – model without the famed opera house’s seal of approval and with rose gold instead of antique gold side cheeks. Let’s be clear, however, the latest Phantom I 108dB may look like a Phantom Gold of five years ago, but the all-important internal processing power and the ADH amplifier circuitry have all been updated. Mostly.

The ‘mostly’ part refers to the DAC itself. I’m not sure how much of an issue this is to the target audience of the Phantom I, but its internal DAC remains a 24bit, 96kHz affair, with the second version of Devialet’s operating system itself topping out at 24bit, 48kHz. Why I’m not convinced this is an issue is because the wireless nature of the Devialet loudspeaker makes the notion of streaming very hi-res files ‘challenging’ at best; limiting such file sizes means easier music delivery with fewer drop-outs and – in the case of multiple Phantoms – reduces the risk of latency problems. It’s also never likely to be an issue through the Phantom I’s preferred musical pathways of Spotify Connect and Bluetooth, or even the optical digital connection provided at the rear. Nevertheless, by current audiophile standards, anything below 32bit, 384kHz with DSD512 and MQA support is perceived as a pinch-point.

Devialet still bristles with TLAs (three letter acronyms). There’s ‘ADH’ (Analogue Digital Hybrid) of course, a design that couples a small, lovely sounding Class A amplifier for that all important first watt or so of sound coupled to a more powerful Class D amplifier for the heavy lifting amp tasks. While it’s a misnomer calling Class D ‘digital’ (technically it’s using pulse-width or pulse-density modulation to drive the output devices of an amplifier as very high frequency switches), this is a somewhat academic distinction; but remember the ‘D’ in ‘Class D’ does not stand for ‘digital’. This itself is subject to its own ‘SoC’ (System on Chip) acronym in the Phantom range.

Staying with the acronyms, the ADH amplifier is coupled to the HPI driver system. While ‘Heart Bass Implosion’ might sound like Shojo Manga or the difficult third album from a 1980s New Romantic band, it’s a useful and descriptive way of highlighting the differences between the pulsating parallel lateral woofer system used in the Phantom and the more traditional cone woofers found in most other loudspeakers. Play a deep bass note and the sides of the Phantom expand and contract like a beating heart, so ‘Heart Bass Implosion’ isn’t too far of a descriptive reach. This is further acronymed to the max by the ‘ACE’ Active Cospherical Engine, which is a neat way of saying the treble unit sits in the acoustic centre of the midrange driver and both are driven actively. In fairness to Devialet, it credits the idea of a pulsating sphere of sound to loudspeaker pioneer Harry F Olsen.

One of Devialet’s clever innovations from the Expert Pro line that easily crosses over to the Phantom is SAM, or ‘Speaker Active Matching’. In the traditional audio world, this meant Devialet had to assess the performance of a range of different loudspeakers from hundreds of manufacturers to create an optimum amplifier profile (in the digital domain). This number crunching is baked into the Phantom models, allowing a very high degree of interaction and control between amplifier and loudspeaker. This has three direct benefits: the amplifier is running at its most optimal for any steady-state or musical signal; the amp has better drive-unit control even in deep bass, and the Phantom is pretty much ‘unburstable’ unless you consciously try to destroy it. It’s not fully ‘party proof’ as those pulsating side drivers are something of a drunk-magnet and the rated 108dB peak SPL is a bit of a limit, but in real-world terms unless you are using the Phantom as a weekend-long PA system pumping out square waves at full throttle, the Phantom remains unfazed when you are in the mood to party hard.

We’re almost done with three capital letters. The new and regularly upgraded Devialet app and operating system platform is called ‘EVO’ and I’m fairly sure were some heavy backronym-invention sessions in Devialet’s Paris office to try and make ‘EVO’ have some deeper meaning, but – as someone who had to wrangle Devialet’s software of a decade ago – ‘evolution’ is fine, as it speaks of a software package that has evolved from something that barely worked to something that takes almost all of the brainwork out of the installation and operation process. Also, if you are using the Phantom’s Roon Ready, UPnP-equipped Ethernet connection, EVO now makes that more of a practical solution instead and less of a kludge, although it’s still not ‘there’ with UPnP streaming. I also found ►

► the Phantom I 108dB was comfier as a mono speaker and setting up for stereo occasionally ended up with dual mono. However, for those still needing the odd hard button here and there, Devialet revised its remote in the process making one of the nicest hockey pucks you’ll ever use at home.

Traditional audiophile speaker systems tend to start from the midband out, but the Phantoms start from the bass on up. And there’s lots of impressive bass; my go-to Anders Trentemoller track [‘Chameleon’ from his The Last Resort album on Poker Flat records] showed just how deep the Phantom I can go; bass in all its teeth-rattling, brain-liquifying, scary window-shaking glory. This is always an impressive track, but here the depth of bass was almost atavistic and visceral. Whatever it is that lurks in the shadows of this track, it was clearly set on eating me this time! As you move further up the bass frequencies, the Phantom is good on rhythms; it’s perhaps less about a fanatical devotion to the beat and more about conveying the sense of emotion and the authority of the bass lines.

Mid and treble are extremely coherent sounding, and the Phantom has an excellent ability to act as an effective point-source, but with all the bass that a point-source tends to only have ‘notionally’. This means the Phantom has excellent imaging properties. The overall balance of the loudspeaker and accurate, but its tonality is somewhat different from what one might expect from conventional loudspeakers; not better, not worse… just different. It’s more about the glitz and polish of recordings rather than absolute neutrality. This is very impressive and projects well into the room, but I found myself wanting a little more ‘the piano has been drinking’ and less ‘lounge lizard’ from my Tom Waits [Nighthawks at the Diner, Asylum]. The staging was excellent, the solidity and depth of the bass outstanding, and the sense of musicians riffing in a room was first rate, but the sound was almost too slick and lacked some overall transparency. This is not without its upside – it makes the Phantom more at home with less-than-perfect recordings and the loudspeaker is great at sidestepping the impact of signal compression and peak loudness.

Nevertheless, I feel the Devialet Phantom I 108dB has its place. It’s unfeasibly impressive in terms of just how much bass you can get from a loudspeaker of this size and its distinctive spot-lit sound quality and forgiving nature will find many enthusiastic listeners. I would like its stereo replay to be more robust, but I suspect even this is gilding the lily for many of those who will buy the Phantom I as a one speaker powerhouse. And in that context, it’s excellent.

Roon Ready: Inputs up to 24bits/96kHz

UPnP Renderer: Inputs up to 24bits/96kHz