If you like the idea of the customisation aspect of a custom- made mechanical keyboard, but can’t afford (or don’t have the time) to build one from scratch, it’s worth having a look at what Ducky has to offer. The company produces a vast range of mechanical keyboards with multiple keyboard sizes, switch types and keycap sets available. UK retailer overclockers.co.uk lists 111 different flavours of Ducky keyboard. The keyboard brand with the next most numerous options at the same retailer is Vortex, with 30 options. 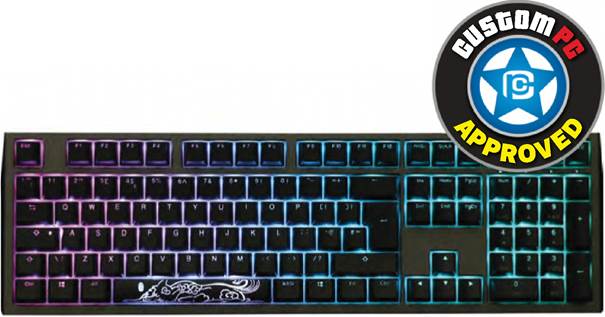 The Shine 7 is Ducky’s flagship keyboard, with a full-sized layout, RGB backlighting and a design that’s capped by a beautiful thick slab of zinc alloy. The overall simplicity of the design makes for an attractively minimalist appearance, as does the fact that the keys are sunken into the metal surround, which gives the Shine 7 a less gangly appearance than keyboards with the switches mounted on the surface.

This sense of build quality runs to other areas as well. The whole keyboard has a real heft to it – it weighs a group test-topping 1.44kg, which in turn provides plenty of rigidity. You also get a removable cable, with the 1.6m cable plugging into a USB Type-C socket at the back of the board. Sadly, there’s no USB pass­through though.

Elsewhere, however, this board isn’t as fully featured as some models on test. You do get an extra count of four proper mechanical switches in the top right corner, which by default are dedicated to mute, volume control and opening the calculator app, of all things. Otherwise, there are no extra gaming keys or other multimedia features.

When it comes to programmability, Ducky provides software for changing the lighting effects, with plenty of options included, although annoyingly the overly bright lock key indicator lights can’t be controlled. There’s no option for changing key functions and programming macros either. Instead, there are loads of (unlabelled) default secondary functions, and you can program keys and macros via a series of key inputs.

On the underside, there’s also a row of four DIP switches for changing the default mode of the keyboard. The first three assign the position of the Fn key (it can be programmed to sit on any of the seven keys that flank the spacebar), while the fourth switches between N-key rollover and 6-key rollover modes.

For switches, you get the choice of nearly all Cherry’s MX range of switches, including standard red, blue and brown. We tested the brown switches, which are light and snappy enough for speedy typing and gaming, but with just a little bit of a tactile bump to inform when you’ve pressed the key.

As for keycaps, you only get the one choice by default, but Ducky sells a load of alternatives, in both standard Cherry profiles as well as the taller SA profile. The included caps are double shot and made with PBT plastic, so they should last a long time as well. A plain black spacebar is included too.

The Ducky Shine 7 RGB isn’t a cheap keyboard and you don’t get masses of extra features for the high price, but what you do get is plenty of quality. From the premium metal-topped design, to the solid overall feel of the keyboard, the real Cherry MX switches and the high-end keycaps, it feels like a step towards a much higher grade of keyboard than most of the others on test. It’s just a shame about the limited programmability and overly bright lock key indicator lights.

A superb quality keyboard that’s about as close to a custom mechanical keyboard as you can get without really splashing the cash.

PROS
CONS
User Rating: Be the first one!
Related Articles