There’s an interesting battle between EKWB’s new EK-AIO 360 D-RGB and Corsair’s H115i RGB Pro XT (see p18) this month, and both approach premium all-in-one (AIO) liquid cooling differently. EKWB has gone for a 360mm radiator instead of the 280mm model used by Corsair, but the EK-AIO 360 D-RGB sticks to the realms of standard AIO liquid coolers with a slim radiator that’s 28mm thick and just under 40cm long. This is a far cry from the company’s monstrous expandable Predator and Phoenix coolers, but it will make it compatible with many more cases.

Rather than relying on software to control its fan and pump speeds, the EK-AIO 360 D-RGB has separate 4-pin PWM connectors for both the pump and fans, allowing you to use your motherboard to control them. This means you don’t need to use software, which some may find pleasing. Thankfully, a 3-way splitter cable is included for the fans to help deal with cable spaghetti, so you just need two headers free on your motherboard to power the three fans and the pump.

Thankfully, most modem motherboards have excellent fan control sections in their EFIs, so you should be able to fine-tune the cooler to your personal needs. The supplied EK-Vadar S 120ER D-RGB fans spin at up to 2,600rpm, so at full speed they’re noticeably louder than those on the Corsair cooler, which hit 2,000rpm. They should also respond instantly to high CPU loads, unlike the H115i RGB Pro XT’s coolant-based response, which was slightly delayed. However, many motherboard EFIs can also offer a delayed fan response anyway.

At low loads, the EK cooler was blissfully quiet, but we did notice that at low pump speeds, just like the Corsair cooler, temperatures were affected, even at idle, so be wary about lowering them too far. At full speed, the pump hits 2,600rpm, and its noise was a little whiny, but this noise was drowned out by the fans anyway.

The pump and fans feature RGB lighting, which is bright but diffuse compared with the vivid colours on the Corsair cooler this month, but there’s a lot more on show. There’s no software included to control the lighting, so you’ll need to use a third-party controller, or your motherboard and its software. 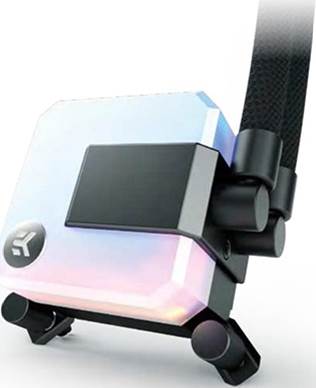 The EK-AIO 360 D-RGB uses digital addressable lighting, so you’ll need a spare 3-pin RGB header – it’s not compatible with 4-pin headers. This does mean there are further separate cables for the lighting, but while these add to the mess, they can at least be daisy-chained together, so you just need one header to control it all.

There are enough fan screws in the box to mount another row of fans should you wish, and every current CPU socket, except Socket TR4 and TR4X, are supported. The cooler uses mounting plates for different sockets, which were a little fiddly to fit, with a backplate included for LGA115x motherboards. If you own an AMD motherboard then you’ll also need to detach its plastic mounting clips, as the cooler mounts directly to the stock AMD backplate.

Otherwise, you just need to deal with thumbscrews and springs, so installation is painless. There’s enough length in the braided tubes to mount the radiator in the roof or front of your case too, and the rotating pump fittings mean it’s easy to angle them in the right direction, depending on where you install the radiator. Unlike the Corsair, you also get a tube of thermal paste, so if you need to reapply it in future as part of an upgrade, you won’t need to buy more. 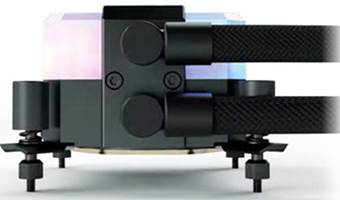 In our overclocked 8-core Ryzen 7 1700 AM4 test rig, the EK-AIO 360 D-RGB managed the best result on test, with a CPU delta T of 4TC beating the Corsair cooler by 2‘C, albeit while making far more noise than both the ARCTIC Liquid Freezer II 240 and the Corsair H115i RGB Pro XT. In our overclocked Core i5-9600K LGA1151 system, the EK AIO 360 D-RGB managed a CPU delta T of 46’C at full speed, matching the Corsair cooler and shaving 7C off the ARCTIC Liquid Freezer II 240, again with a trade-off in terms of far more noise. The EK cooler is very quiet at low to medium loads, however.

We expected this potent performance to continue when dealing with our toughest customer – the Core i9-9980XE, but it was a few degrees off the pace of the Corsair H115i RGB Pro XT here, with the CPU delta T being 4*C warmer than the Corsair at on its Extreme profile, and only 4’C cooler than the Corsair H115i RGB Pro XT on its far quieter Balanced profile. We even reseated the cooler and reapplied thermal paste to make sure the figures were correct, but we got the same result

Apart from a slightly disappointing result in our LGA2066 system, the EKWB EK-AIO 360 D-RGB is a beast of an AIO liquid cooler, outstripping the Corsair H115i RGB Pro XT in our other test systems and offering huge gains over smaller (and cheaper) liquid coolers, such as the ARCTIC Liquid Freezer II 240. It delivers superb cooling, while offering snazzy RGB lighting and very quiet operation at low to medium loads. Its easy to install, uses a compact 360mm radiator and you get enough thermal paste for several applications.

There are some downsides though. The pump doesn’t offer enough grunt to avoid higher CPU temperatures at low speeds, where its quietest – you certainly wouldn’t expect this from EKWB’s own pumps for DIY water cooling.

You also have to deal with a lot of cables, and the fans make a lot of noise at full load. You’ll also need to delve into your motherboard’s EFI or install your motherboard’s software to tweak the fan profiles, which won’t be a user- friendly experience for everybody. Ultimately, though, this is a powerful AIO liquid cooler that looks great and performs well, and it’s not unreasonably priced for the power on offer either.

Excellent cooling and quiet operation at low speeds, although it makes a din at full speed.