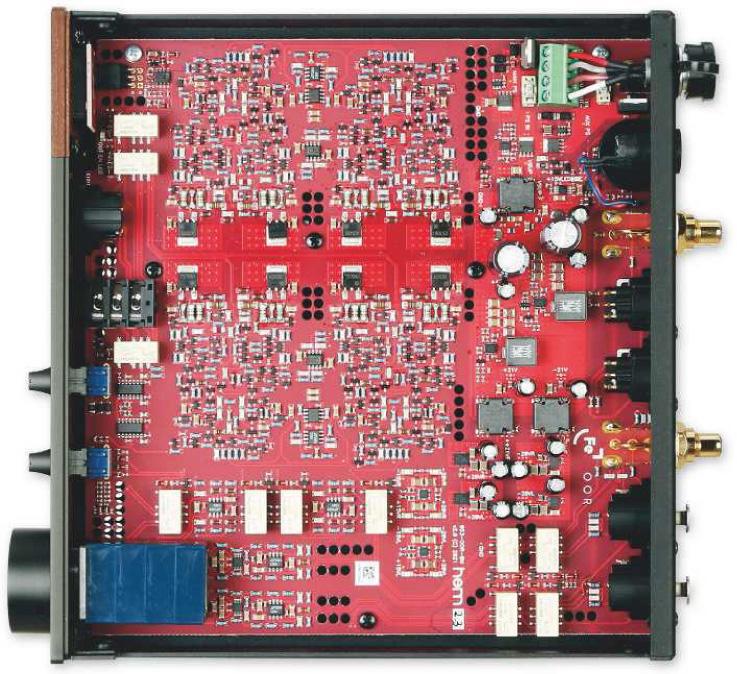 Polish company HEM, based just outside Warsaw in Pruszków, had something of a dream debut for its Ferrum brand: its first-ever product, the Hypsos power supply collected a 2021-22 EISA award in the Hi-Fi Accessory category [HFN Mar & Oct ’21]. The judges praised it as ‘a potent upgrade for a wide range of devices, not least USB DAC/headphone amplifiers, typically encouraging a sound with greater ease and smoothness – and yes, power!’

It wasn’t hard to see why: as well as having presets for use with over 100 products, from Arcam’s i- and r- models through to units from Wadia and Yulong, the linear/switching hybrid supply also offers a continuously variable output over a range of 5-30V, allowing it to be ‘tuned’ for best performance with the user’s chosen product. It’s a tour de force, demonstrating the innovation of the company’s engineers, so the logical follow-up is – well actually it’s a all-analogue headphone amplifier, the Ferrum OOR.

At just 22cm wide and 5cm tall, the OOR matches the style and dimensions of the Hypsos, and indeed can be used with the offboard power supply if you wish [see PM’s boxout, p67]. As standard it’s supplied with a 24V plug-top supply. Initial impressions of the unit are of its simplicity: it’s basically designed to be used with a single source – or at least one apiece via unbalanced RCAs and balanced XLRs – or used in a loop with a preamp or amplifier’s ‘tape’ connections, with matching RCA/XLR outputs provided on the rear panel.

By default, the OOR arrives with these outputs set to ‘variable’, along with the headphone sockets on the front panel, which are available balanced (four-pin XLR) and single-ended (6.35mm socket). However, should you wish to have a line-level output back into an amplifier, it can be switched, via the rear panel, into what the company calls its ‘Bypass Function’.

This takes the volume control out of the equation for all outputs – including the headphone sockets – so it’s not surprising the manual cautions about the use of this facility, adding a note that ‘Ferrum refuses every liability for damage to equipment due to using the Bypass function’. Hmmm… in fact, I struggled to work out what the use of this bypass would be, finally realising that it’s probably only relevant when feeding the OOR from the preouts of an amp or preamp, with a signal thus under the guidance of that preamp section’s volume control.

The other controls here are simple – aside from the volume adjustment, there’s a switch to select between the RCA and XLR inputs, with a central ‘off’ position, and a gain control: this is just marked ‘–dB/0/+dB’, and its effect varies according to the headphones in use [see PM’s Lab Report, p69]. A final control on the rear panel allows the Ferrum logo to the left of the fascia to be dimmed – it’s a little thumbwheel below that bypass control, and reminds me of the tuning and volume adjustments on an old transistor radio I had half a century ago.

Within the casework, which is smart but a little functional in an ‘exposed screw-heads’ kind of way, the signal path of the OOR is balanced throughout (the RCA inputs are converted to balanced working), with in-house power amplification design. The output stage is kept permanently powered up, as the company puts it ‘therefore reducing distortion to inaudible levels and keeping [the output devices] in a state where they can instantly unleash all their power, crucial for high dynamics, superlative control and authority in sound’. Furthermore, Ferrum adds that the intention of the design is to deliver ‘ultra-low distortion, zero fatigue, huge dynamics and unrivalled detail… focused on a balanced and very transparent sound signature, making listening fatigue something of the past’.

It’s all fighting talk, claiming that ‘the OOR will redefine the category of headphone amplifiers… [it] will drive any headphones effortlessly to the max of their potential, while preserving the essence of the music it amplifies’. For all that, this is a compact and simple-to-use unit, and as well as being a good desktop option for headphone listeners, would also work well when connected to a compact power amplifier or directly into a pair of active speakers. You could, I guess, even use it as a simple preamp/headphone amp in a conventional system, although the absence of a remote control – which, after all, would fly in the face of the simplicity here – might also count against it in such a configuration.

‘A chilling solo piano is set against a distant backdrop’

I tried the OOR in ‘tape loop’ configuration with a number of amplifiers, before settling for a rather simpler set-up for most of my listening, connecting it to the outputs of iFi Audio’s NEO iDSD DAC [HFN Mar ’21] fed from my Mac mini running Roon. For comparison I had to hand a headphone amp in the same price sector, but of a very different kind, in the form of Naim’s Uniti Atom Headphone Edition [HFN Aug ’21] and fed via Roon. Also available was a range of headphones, including my heavily-used original Focal Spirit Pro [HFN Dec ’15] and planar magnetic Oppo PM-1 [HFN Jul ’14 – the latter used in balanced mode]. While the OOR is short of the ‘fiddle-ability’ of some headphone amplifiers – I’m thinking here of the bright red SPL Phonitor xe [HFN Jul ’21], with its crossfeed, angle and ‘Laterality’ controls (and also priced in the same ballpark) – it compensates for its simplicity with a sound of unusual openness and directness. Whichever headphones you plug into it, balanced or unbalanced, appear to have been given a shot of extra power – not just in level, although the OOR will drive them hard and extremely cleanly, but in terms of dynamic freedom and openness of expression.

Playing Rosanne Philippens’ sparkling recent recording of Haydn and Stravinsky with The Vondel Strings [Channel Classics CCS 43921; DXD], what’s obvious from the off is the clarity on offer here, allied to a generous bass for the ‘bigger fiddles’, and the detailed, fresh sound of the soloist’s violin both within and before the ensemble. The music is presented as a whole, with no odd instrumental tonality to upset the ear, and yet every element of the performance is open for inspection.

Yes, the OOR gives away a little warmth and lushness to Naim’s Uniti Atom HE with recordings such as this, as I ascertained when running it (carefully!) in ‘bypass mode’ from the latter’s balanced output, but the differences are such that the choice of headphones is more likely to be a deciding factor in the balance of the set-up. For example, used with the rich-sounding Bowers & Wilkins P9 Signature [HFN Mar ’17], the OOR cut through some of the warmth to deliver marginally more detail, while with a set of rather drier Austrian Audio Hi-X55s the Atom Headphone Edition took the prize with its generosity of balance.

With Nao’s poignant And Then Life Was Beautiful set [Little Tokyo Recordings/RCA/Sony Music 19439900512] the Ferrum amp is highly revealing of the singer’s distinctive voice, while also delivering both substance and detail in the rich arrangements and production of the album. The result was a presentation with real presence, plus some superbly extended bass and crisp beats beneath Nao’s often fragile-sounding and heartfelt vocals.

This amp’s ability to drive hard while giving great insight is firmly to the fore with Steely Dan’s live Northeast Corridor [Universal UICY-16015], bringing out the ambience of what is, to be fair, a run through the greatest hits in front of a loyal fanbase. As one might expect, it’s all pretty note-perfect, albeit with a bit of extemporisation here and there, but none the less enjoyable for all that. The ability of Ferrum’s OOR amplifier to reveal all the threads of these performances, especially when driving the late-lamented Oppo PM-1 headphones in balanced mode, is never in doubt.

Rather less sparky – chilly in fact – is For Now I Am Winter, the 2013 electronica/classical crossover by Ólafur Arnalds [Mercury Classics 00289 481 0150], combining icy strings and driving beats. The OOR headphone amp really makes the most of the intertwining rhythms, the sheen of the string section, the deep bass and the sometimes stinging percussion to create a sound with bags of atmosphere and no shortage of interest.

This is especially obvious in the shifting moods of ‘Brim’ as it flows into the album’s title track. Meanwhile the stripped-down ‘Words Of Amber’ finds the chilling solo piano beautifully set against a distant atmospheric background – if you want an unsettling sound lodged inside your head, then this is the place to find it.

Piano of a different kind is equally well handled with A Curious Feeling, the 1973 solo debut by Genesis key-tickler Tony Banks [Esoteric Recordings ECLEC 2160]. Here the sound is big and bold, refined and immaculately produced, and the OOR gets its teeth into all that prog detail and richness to fine effect – nowhere more than on the strikingly cinematic ‘The Waters Of Lethe’.

It’s far from the only headphone amp in its price category, and many rivals offer more facilities, but if you want to play it simple, the OOR will please with its direct, communicative delivery via a wide variety of partnering ’phones. Avoid that bypass mode if you don’t want nasty surprises and potential damage to partnering equipment – you’ve been warned! – and you won’t go wrong here.

Made by: HEM Ltd, Poland