Fierce PC’s Ardent Core immediately impresses with its striking design and custom water-cooling system. The CPU is topped with an Eisblock XPX Aurora with attractive cooling channels, and another Eisblock chills the RTX 2080 Super GPU. They’re connected with Alphacool’s hard tubing, and the front of the chassis is dominated by an Alphacool NexXxos ST30 240mm radiator with four 120mm fans. 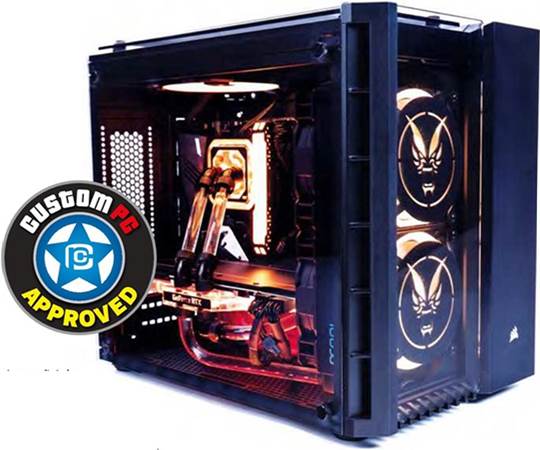 Despite all this cooling hardware, the Ardent also uses a mini-ITX Corsair Crystal 280X case, which means Fierce PC has been clever with other cooling components. The sizeable cavity behind the motherboard tray houses the Alphacool Eisstation VPP reservoir, as well as the pump and a plug for draining the loop.

Meanwhile, the CPU and GPU waterblocks are illuminated with an attractive orange shade, along with the DIM Ms and four intake fans, with the latter sporting some great-looking Fierce PC grilles. Meanwhile, a row of RGB LEDs along the bottom of the chassis illuminates the interior from below. The Ardent looks superb, and the case’s 351mm height and 276mm width make this square-shaped system relatively easy to take to events. Build quality is great, too: the tempered glass and metal used throughout is sturdy.

As ever, though, mini-ITX enclosures mean compromises. There’s no real room to add extra storage – the Corsair case has removable 2.5in and 3.5in cages, but the Ardent’s water-cooling and lighting hardware means they can’t be fitted here. This system isn’t always the tidiest either. There are wayward cables around the rear and a handful of loose wires visible from the front.

Meanwhile, an AMD Ryzen 7 3700X is left at its standard base and boost clocks of 3.6GHz and 4.4GHz, and the 16GB of DDR4 memory runs at a superb effective speed of 3600MHz. You also get a 1TB Seagate FireCuda 520 SSD, which makes use of the motherboard’s PCI-E 4 interface, but there’s no secondary hard disk.

It’s all plugged into a Gigabyte X570I Aorus Pro Wi-Fi motherboard, which has beefed-up ALC 1220-VB audio, Bluetooth 5, and dual-band 802.11ax Wi-Fi 6. It’s a top tier board in terms of connections – at the rear, it has five full- sized USB 3.2 ports, alongside a Type-C connector, and there’s a Q-Flash button for EFI flashing too.

There are two M.2 connectors, with the SSD installed in the socket on the rear of the board. However, the second slot sits behind all the hefty graphics hardware, making it tricky to access. As ever with mini-ITX, there are only two DIMM slots and no additional PCI-E slots either. These are the compromises you always make when buying a mini machine, but it’s great to see Corsair RM750x PSU included, which is fully modular and has an 80 Plus Gold rating.

We have no qualms about the warranty either. Its a generous five year return to base labour deal, with two years of parts coverage and six months of collect and return service. 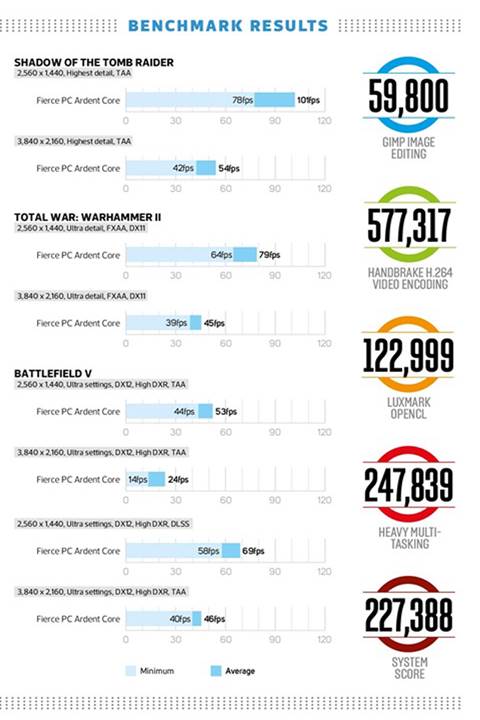 The RTX 2080 Super is excellent for gaming. At 1080p, its able to handle games at high frame rates, and at 2,560 x 1,440, its minimum frame rates ranged between 44fps and 78fps. That means you’ll be able to play the vast majority of games at smooth frame rates. It can even handle a bit of 4K gaming. It easily got beyond 30fps in Shadow of the Tomb Raider and Total War: Warhammer II, and if you use DLSS, you can also get a 40fps minimum in Battlefield V with High DXR, although it can’t do it at this resolution otherwise.

The Ryzen 7 3700X CPU is a good choice too. Its image editing result of 59,800 is as fast as any other consumer Intel or AMD chip, and it returned impressive pace in our heavily multi-threaded HandBrake test. Its overall score of 227,388 is only a few thousand points behind systems based on the pricier Ryzen 7 3800X and Intel Core i9-9900KS. The SSD is great too. Its read and write speeds of 4,999MB/sec and 4,280MB/sec are fantastic – faster than any SSD you’ll find in an Intel PC, and among the best results from any consumer drive right now.

In terms of thermals, the GPU s peak delta E of 35’C is great, thanks to the water-cooling system. However, the CPU’s peak figure of 72*C is only just short of worrying temperature levels. Happily, this result was only achieved in a stress test – you’re extremely unlikely to encounter it in normal use, including gaming. The Ardent produces a noticeable, low fan noise as well, but we’ve certainly heard worse. You just won’t hear this PC in a LAN hall or beyond your headset, and the noise levels are pleasingly consistent. 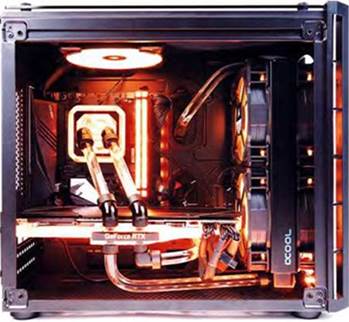 The Ardent serves up great pace, fantastic design, and a custom water-cooling loop in a build that’s small enough to easily take to LAN parties. The mini-ITX build means limited upgrade options, though, and the water-cooling gear also adds to the cost. You can undoubtedly get similar performance for less money in a standard, air-cooled ATX PC, but this is an excellent, well-built machine if you’re looking for an attractive, powerful rig in a small package.