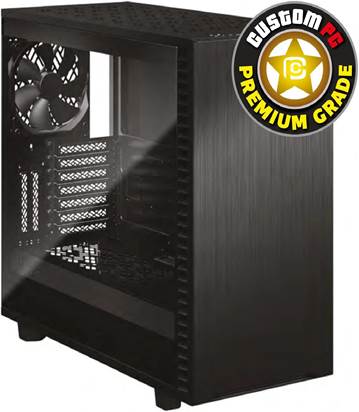 Following the launch of the Fractal Design Define 7 Compact last month, we’ve finally got our mitts on its bigger sibling, the Define 7, which unfortunately got lost in the post a few months ago. The extra cash buys you a bigger case, of course, with the depth stretching from 43cm to 54cm, providing space for various extra bits and pieces. It’s also available in three monochrome colours and with glass or solid side panels.

There’s a vertical CPU mount, although no riser cable is included, and motherboard compatibility now includes E-ATX models. You also get an 8-port fan hub with three 4-pin PWM ports and six 3-pin ports, allowing you to control a bunch of fans from a single motherboard header, and there’s extensive Velcro-based cable tidying as well.

Cooling is solid too. Out of the box, there are two 140mm fans included in the front, and there’s space for a trio of either 120mm or 140mm fans too – one more of the latter than the Compact case, although you still can’t squeeze a 420mm radiator in the front – only 360mm or 280mm models.

Meanwhile, the roof offers room for three 140mm fans, and you can fit a monstrous 420mm radiator here too. There’s also a 140mm fan in the rear, and the single base fan mount in the Define 7 Compact increases to a pair of either 120mm or 140mm fans. Clearly, there’s scope for a monster water-cooling system inside Define 7.

If the Define 7 Compact left you wanting more hard disk mounts, then the Define 7 has the answer. A large panel next to the motherboard can swap to the opposite side and provide a resting place for six 3.5in trays, with up to 14 possible locations if you purchase extra trays. Two 2.5in trays are also included in the box, which can be positioned on top of the PSU cover or behind the motherboard tray, but you’ll need to fork out for additional trays to take up the total to the maximum of four. There’s even a 5.25in drive bay for anyone who still likes to use an optical drive, or a 5.25in reservoir.

Thankfully, even if you swap from the standard layout to the hard disk layout, there’s still space for a half-height radiator in the front. As you’d expect from Fractal Design, the base and front are also equipped with pull-out dust filters, with the front one accessed by popping off the front panel, as are the front fan mounts.

Like the Define Compact, the case is equipped with both closed and vented roof panels, which you can swap out depending on whether you intend to install fans or radiators there. We’ve otherwise found using the vented panel offers little improvement. Meanwhile, the front I/O panel is the same as the one on the cheaper case, with a generous helping of pairs of USB 3 and USB 2 ports, a Type-C port, power and reset buttons, and audio ports.

The best parts of the Define 7 Compact were its blissfully easy-to-use side panels, which simply pull away using finger grips on one edge, and they’re here again. The same also goes for the partly removable roof panel, which opens up the whole of the inner chamber, allowing unprecedented access to often tricky-to-reach parts of the case, such as the upper section of your motherboard. 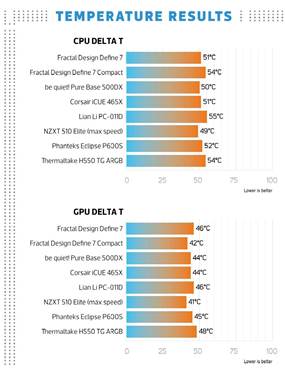 This feature will certainly make installing water-cooling systems far easier, especially if you need to work with rigid tubing. If you prefer to throw in a large air cooler, you’ll also benefit from this case’s taller CPU cooler height limit, which stretches to 185mm, up from the restrictive 169mm in the Define 7 Compact.

With more fans, it wasn’t surprising to see the larger case perform better than the Compact version, knocking 3°C off the CPU delta T and also outperforming the Thermaltake H550 TG ARGB and Phanteks Eclipse P600S, while matching the Corsair iCUE 465X, all with extremely low noise levels.

The GPU delta T of 46°C was slightly warmer, likely because the graphics card sits further away from the front fans than in the significantly shorter Define 7 Compact. However, even this figure was only two degrees short of cases such as the Phanteks Eclipse P600S and be quiet! Pure Base 500DX. 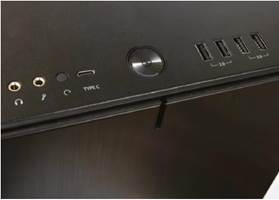 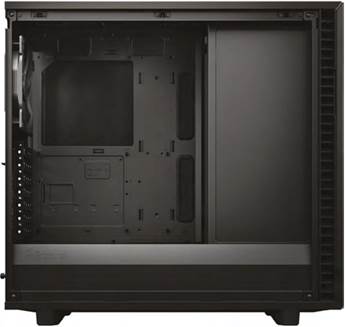 Adding a base fan would likely improve airflow here, and we’d experiment with moving one of the front fans to this location as well, depending on your setup. As we expected, though, the vented roof panel only made a 1°C difference to the CPU delta T, which is within the margin of error.

Fractal Design is on fire in 2020, following a few years of seemingly churning out very familiar, unexciting models, with one or two exceptions. With the Define 7, it has pushed the envelope further than with the Define R6, creating a case that appeals just as much to air-cooled aficionados as it does to die-hard water-cooling fans, while making the build process much easier.

That’s never an easy feat, but Fractal Design has done it in style. The Define 7 is already great out of the box, and it also has extensive levels of expansion and customisation options, whether you want to fill it with a dozen hard disks or massive radiators.

The Phanteks Eclipse P600S is perhaps more attractive, while offering dual-system support and similar features, but it lacks the Define 7’s removable roof and feels quite small by comparison. The only features we’d change are adding more 4-pin ports on the fan hub, and maybe even reining in the dimensions a little, especially the depth. But overall, this is a brilliant PC case that’s highly flexible and has great features, some of which you won’t find elsewhere.

An awesome case for air cooling and water cooling alike, and the removable case makes building much easier.