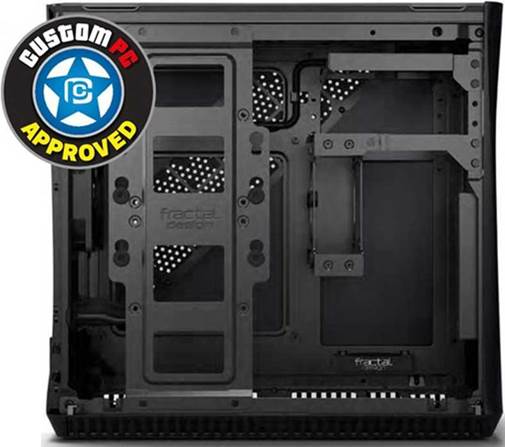 he Era ITX is the product of Fractal Design collaborating with Intel to create a new mini- ITX case, and it demands a serious premium. This does make it noticeably more affordable than NZXT’s H1 (see p24), but that case also includes an SFX PSU and a 140mm liquid-cooling system as standard.

So what’s so special about the Era ITX? For starters, it’s available in some very stylish colours, including options for top panels with wood finishes. Our black sample looks quite plain by comparison. Externally, there are very few vents, and there are also no tempered glass side panels or RGB lighting.

This is a very minimalist case, at least from the outside. The roof sports a large vent where you can interchange a mesh panel with a tempered glass one that looks more attractive, but doing so will reduce airflow.

The chassis, which stands 310mm tall, 325mm deep and 166mm wide, is far from being a boring cuboid, though, with its curved aluminium panels no doubt contributing to the cost. You get a pair of USB 3 ports on the front panel, plus a Type-C port that requires a full-fat Type-C header to work. You’ll need a fairly recent, feature-loaded motherboard if you want to take advantage of it.

The base of the case would be a great place for an extra vent, especially as the GPU sits face-down here. However, Fractal Design has instead included vents down the sides of the base, which won’t be as effective. That’s a shame, as the roof sports two 120mm fan mounts and the base offers two 140mm fan mounts, but the latter can only be occupied if you’re using a single-slot PCI-E device.

There’s definitely scope for added ventilation here, and if we were making changes, we’d start by adding vents to the base of the case. Meanwhile, the side panels pop off with no screws required, and they offer small diagonal vents, but in general, air has a far harder time here than with NZXT’s H1, which is riddled with vents.

Inside, we can’t argue with Fractal Design’s use of space, though, which has been well used down to every square inch. Both SFX and ATX PSUs are supported, with adjustable mounts for both sizes, which allow you to slide the PSU up and down to make way for cables, fans and radiators in the roof.

If you use a modular SFX PSU and a graphics card up to 295mm wide, there’s 67mm clearance in the roof, so a 30mm-thick 240mm radiator, or a pair of 120mm radiators and one row of fans (or two rows of half-height fans) are definite possibilities here. Space is limited if you want to fit a full custom water-cooling loop, unless you use a CPU or GPU waterblock with an integrated pump, but all-in-one liquid coolers are definitely on the cards.

Another limitation is the CPU cooler height of 120mm, which rules out tower heatsinks, but does offer space for reasonably

chunky low-profile heatsinks. However, if you use the optional large plate that sits over the motherboard, and offers a home to either two 2.5in SSDs or a single 3.5in hard disk, that will see the CPU cooler height reduced to 70mm.

Thankfully, a second storage mount sits in front of the PSU bracket and offers an identical array of options. In short, there’s space for a hard disk or 2.5in SSD without compromising on the Era ITX’s liquid-cooling credentials, but you’ll need to decide early on if you’ll be cooling your CPU with liquid or air, as your choice will dictate your storage options, especially if you need to maximise either factor. Thankfully, cooling isn’t left entirely to chance out of the box, as Fractal Design does include a single 80mm exhaust fan, which means the case will be cool enough with a low-end PC inside it.

With the mesh roof vent installed, the best cooling setup available saw a CPU delta T of 57 C, which was enough to see off the fanless mini- ITX cases from our recent group test, such as the Lian Li PC-Q37WX and Raijintek Ophion. The supplied 80mmm fan was surprisingly quiet too, although the SilverStone LD03 offered noticeably better CPU cooling, shaving 3’C off this temperature. When we added the tempered glass panel, the Era ITX’s CPU delta T rose to 60’C. This isn’t a disaster, so if you prefer the aesthetics of the glass panel, which is undeniably attractive, you won’t be cooking your hardware.

The GPU delta T was 60 C and this figure only rose by 1’C with the glass panel installed. That’s not in the danger zone, but there are some significantly better results here too, with the SilverStone LD03 shaving a massive 10’C off this result and the Phanteks Shift Air knocking 11*C off it. It’s clear that our initial concerns about the lack of ventilation for GPUs in the base were on the money.

With a pair of 120mm all-in-one liquid cooler mounts, or space for a single 240mm radiator. Fractal Design has created a tiny case that’s up to the task of cooling all but the most powerful mainstream desktop CPUs – even AMD’s Ryzen 9 3950X should be tameable with a suitably powerful AIO liquid cooler. You have to deal with lots of screws and brackets, but the end result is a very flexible chassis with an above-average amount of storage and cooling options for its size.

The only downside is GPU cooling, thanks to the lack of lower ventilation, but this situation could also be improved by using a high-performance open-air GPU cooler, rather than the blower-style fan on our test card. The case is also a blank cooling canvas out of the box, with just a tiny 80mm fan included as standard. If anything, the main selling points of the Era ITX are its design and available colours. It’s unique, attractive and very compact, so while it might not get top marks for cooling, it’s still well worth considering if you want to build an eye-catching mini PC.

A good-looking, flexible and tiny case, but the lack of ventilation means GPU cooling is poor.