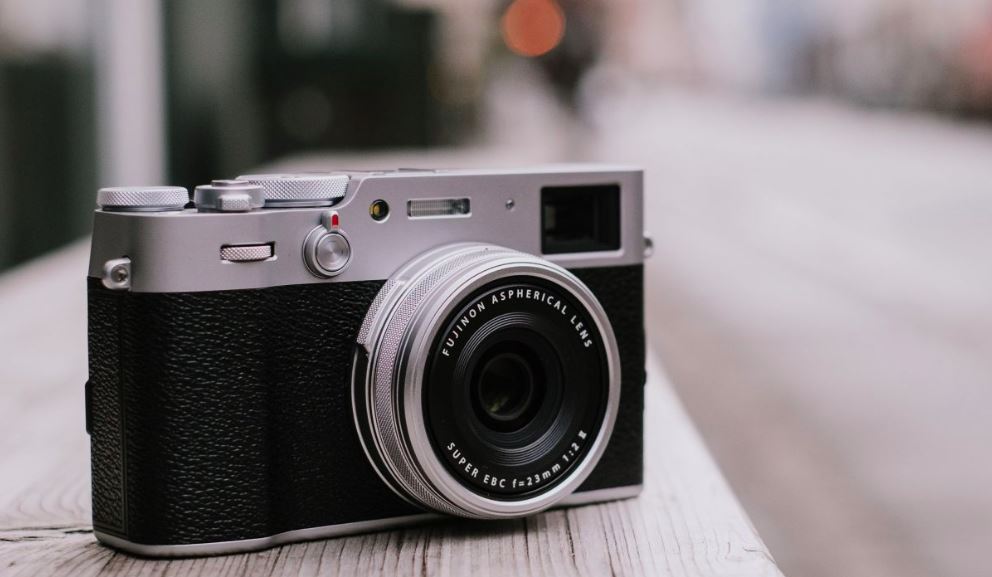 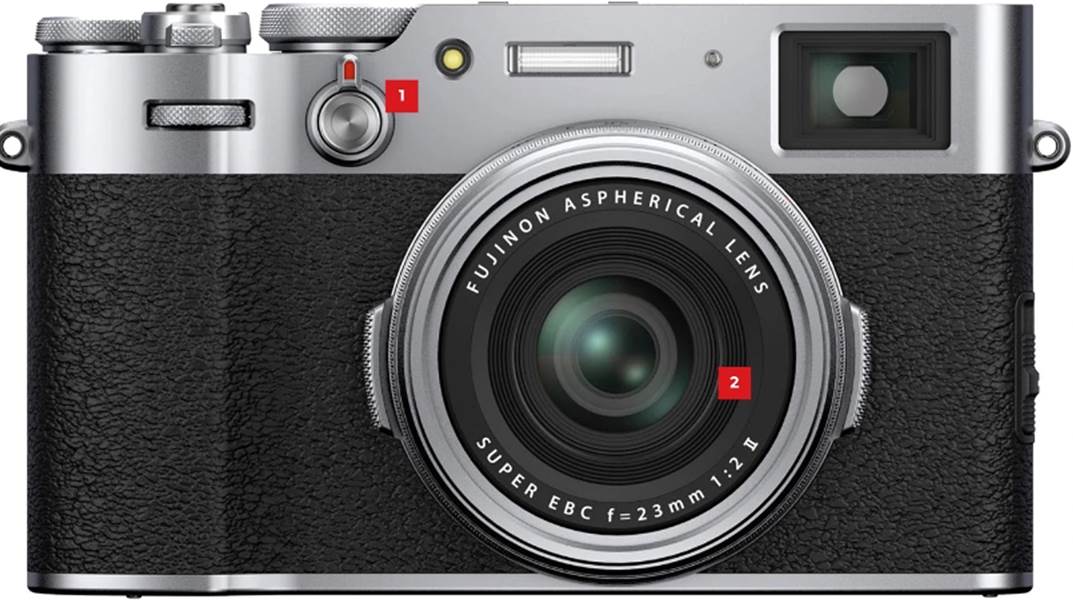 1 This lever switches between a regular EVF and the X100V’s hybrid optical viewfinder.

2 The fixed 23mm f/2 lens has the same specs as before, but a new. sharper optical design.

The Fujifilm X100V is part of Fujifilm’s X-Series camera range, but a bit of an outlier. Unlike its siblings, it doesn’t take interchangeable lenses. Instead, it has a fixed 23mm f/2 lens (35mm equivalent), which offers a classic focal length for everyday use and street photography, and a design that’s slim enough to slide into a jacket pocket.

The X100V is the fifth version of this design: it has Fujifilm’s latest 26.1-megapixel X-Trans processor, a new and superior lens, and a new tilting touchscreen. There are some ergonomic enhancements, but fundamentally this is the same design that has developed a cult following amongst enthusiast and pro photographers.

The X1100V has Fujifilm’s unique hybrid optical/electronic viewfinder. which you can switch between with a lever on the front, and external shutter speed and lens aperture dials straight from the ‘old days’ of film cameras. It even has an external ISO dial to go with them.

The fixed lens distinguishes it from Fujifilm’s X-mount mirrorless cameras, like the X-T3 and X-T30, but the hybrid viewfinder is shared by the Fujifilm X-Pro3. You could even think of the X100V as a slimmer, lighter and more affordable alternative to the X-Pro3. with a fixed lens rather than the choice of interchangeable ones.

There are several new features on the X100V, so let’s start with the lens. Fujifilm acknowledges that the original 23mm f/2 lens needed an update to do justice to the latest sensors, and says the new lens offers better resolution 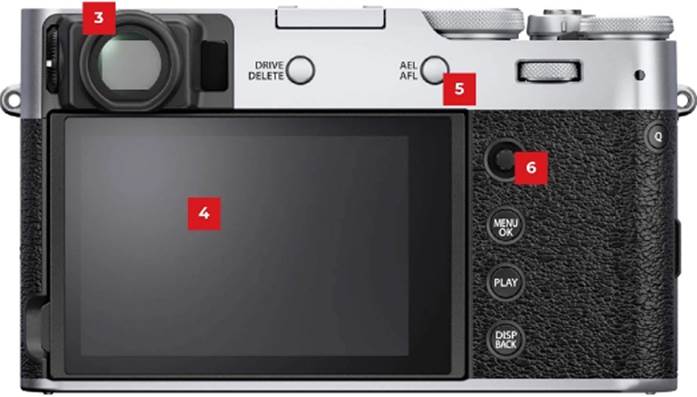 3 A hybrid viewfinder means you can choose between electronic or optical modes, each with advantages in different situations.

4 A noteworthy feature of the X100V is its flush-fitting tiltable touchscreen display.

6 The X100V has no D-pad on the back: the joystick and ‘Q’ button do a similar job without the risk of so many accidental button presses.

7 The lens is super-slim but still has room for a manual aperture ring -or you can turn it to ‘A’ and let the camera set the aperture.

8 The X100V has a revised ISO dial that now stays up when you pull it and makes adjustments easier.

and lower distortion. You can’t change lenses on this camera, but you can use Fujifilm’s optional WCL-X100 II wide conversion lens to get a 28mm equivalent focal length, or the TCL-X1OO II tele-conversion lens for 50mm equivalent.

Inside, the X100V now has Fujifilm’s latest 26.1-megapixel APS-C X-Trans 4 back-illuminated sensor. This has a modest two-megapixel increase in resolution over the previous model, but the chief advantage is a big improvement to the autofocus system, faster processing speeds and the 4K video capabilities. 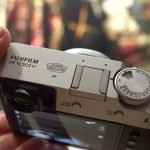 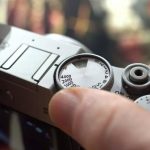 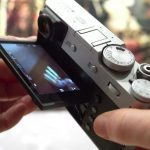 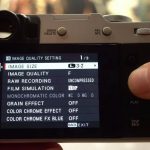 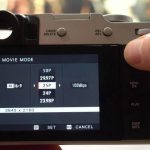 With video features becoming ever more important for photographers and content creators, the X100V can capture 4K at the usual 30/25/24p frame rates, but also 1080 Full HD footage at up to 120fps. For more advanced filmmaking, it can record 10-bit 4:2:2 quality video to an external recorder via its HDMI port.

The hybrid optical/electronic viewfinder has been upgraded in the X100V, but the biggest change to the viewing system is round the back of the camera, where the old model’s fixed screen has been replaced by a tilting touchscreen display.

From a distance, the X100V looks just like the previous cameras in this series. It’s no smaller in width or height than the average mirrorless camera, but it is much slimmer. The 23mm f/2 lens protrudes only a small distance from the body: this is a camera you could easily keep in a coat pocket.

It’s well-made, too. The top and bottom plates are milled from single pieces of aluminium, and the body has a classy-looking ‘Alumite’ satin finish. (It’s also available in black.)

Close up. the differences from previous models become obvious. The controls on the top plate have a neater look, and the ISO dial now stays up when you pull it up to change the setting – previously, it was spring- loaded and trickier to use. This sounds like a small point, but will be exciting news to fans of X100-series cameras. 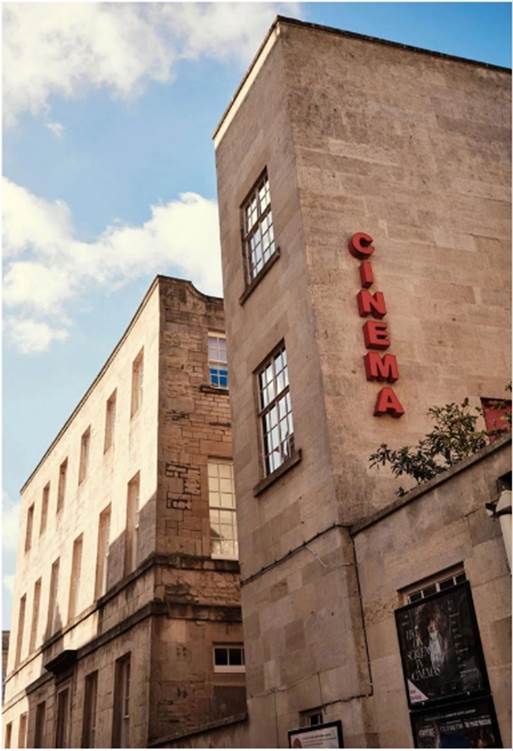 Detail rendition is excellent and, although it wasn’t needed for this shot, the high-ISO image quality is impressive.

Round the back, the screen sits so flush with the camera body that you could easily miss the fact it can be flipped out and tilted. There’s no D-pad on this camera, but there is a small joystick for AF point selection and menu navigation. Four-way D-pads seem to be disappearing from Fujifilm cameras (there isn’t one on the new X-T200 either), but they’re no great loss: many of their functions 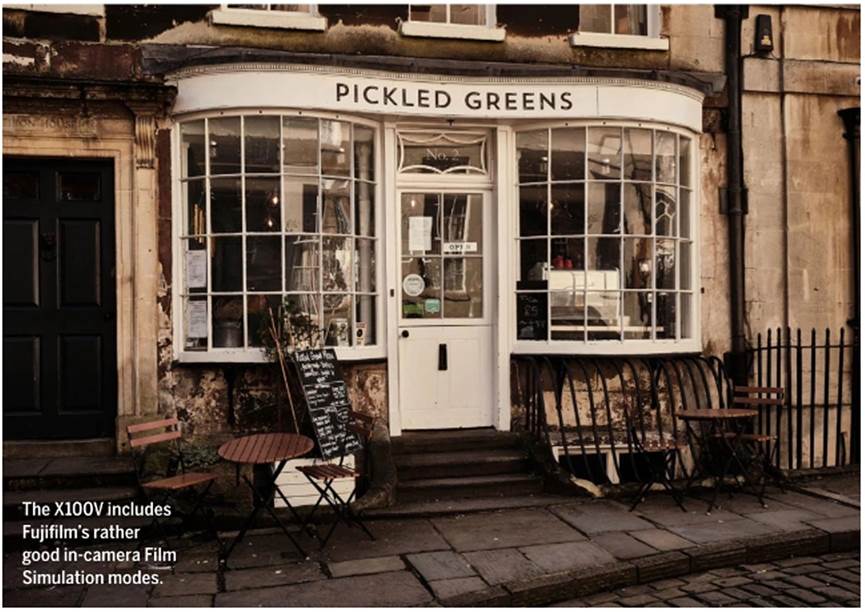 can be accessed via Fujifilm’s ‘Q’ menu anyway, and they are a little too easy to press by accident.

The Q button on the X100V is surprisingly small, and located on the far right side of the body, where your thumb rests. It’s not that easy to find by touch, but it’s likely you’ll soon get used to its position. You also have to hunt around to find the focus mode switch, which is in an unusual position on the left side of the body.

The hybrid viewfinder is quite fascinating. In EVF mode, it’s sharp, clear and undistorted – this is a high-quality electronic display.

In OVF mode, the magnification switches to show a wider view of the scene, with bright framing guides a little way in from the edges.

There is some distortion evident while you’re using the OVF mode, but that’s soon forgotten – and what we do like is that you can see what’s happening outside the frame and anticipate fast-moving subjects much more easily. The hybrid electronic/ optical display also means you get much more shooting information around the edges of the framing guide that you do with a conventional optical viewfinder. 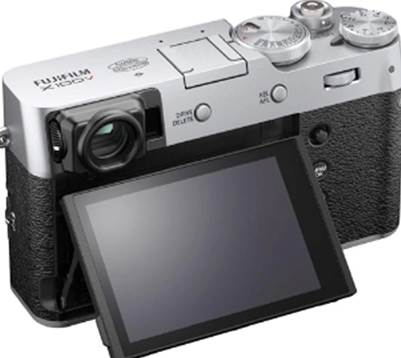 This tilting touchscreen is a new feature for the X100 series. It’s so slim it barely protrudes, and it’s really useful to have.

Otherwise, the X100V is very much like its predecessors to use. The external exposure dials encourage you to pay much more attention to shutter speeds and apertures (and the creative potential these settings offer), and the slim body makes it a perfect everyday take-anywhere camera.

The X100V’s build quality is terrific. It really does feel like a premium product, and while it might not be designed specifically for video, its slim body and manageable weight mean it works well on a mid-size gimbal, too.

First impressions are that the new lens is visibly sharper at close range and wide-open than its predecessor, which was a bit weak in these situations. The new lens does actually focus very close indeed, so although it’s not a true 1:1 macro lens, it can still capture shots of small objects.

We were hoping the new lens would cure another criticism of the old model – its sluggish and noisy autofocus system. It is a lot snappier, though it still doesn’t quite have the speed and silky smoothness of Fujifilm’s best X-mount lenses. If that’s the price you pay for an f/2 lens slim enough to make this camera pocketable, though, it’s a perfectly acceptable compromise. Indeed, in real-world use. even if it lacks the finesse of some X-mount lenses, it is fast and doesn’t seem to miss a shot or ‘hunt’ for focus.

The image quality from the X100V is fanstastic, and we wouldn’t expect anything else. The colours are excellent, and despite having more megapixels than most of its APS-C rivals, the X100V maintains good image quality across the ISO range. 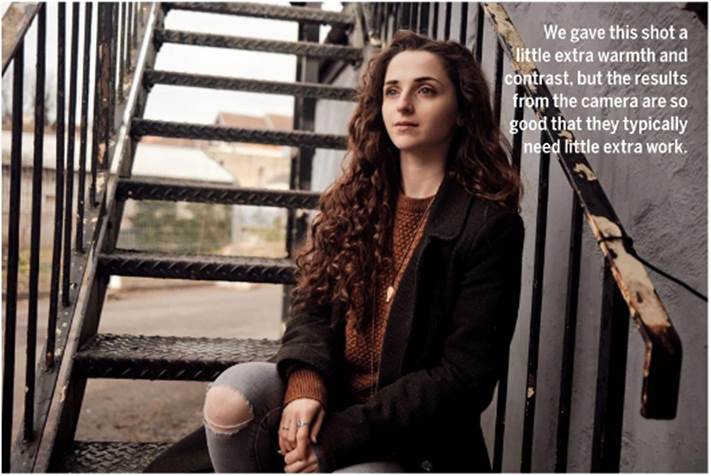 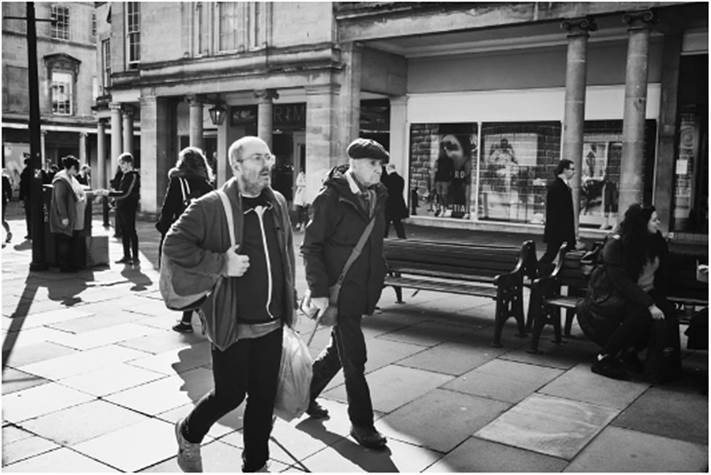 The Fujifilm X100V is a classic ‘street camera’, and its snappy, positive autofocus hardly missed a beat during our stills photography testing.

At the time of testing. Adobe hadn’t updated its software to provide support for the X100V’s raw files, but the latest version of Capture One was compatible, and also does a superb job – Phase One and Fujifilm have close ties these days. Our sample images received only slight editing, except where indicated.

The Fujifilm X100V and its fixed prime lens might not be the obvious choice for a video camera, but the video quality is really pleasing. The 200Mbps bitrate is very decent from what is essentially a small point-and- click camera. Fujifilm has even included a shutter speed of 1/48 sec so that dedicated movie shooters can capture 24p with exactly half the shutter speed – the ideal 180-degree ‘shutter angle’. You can even shoot in DCI 4K at 17:9.

There are a few annoyances for video shooters, however. First, there’s just a single UHS-I card slot, and changing both the memory card and the battery means you have to unmount the camera from any tripod or gimbal plate. This is a factor because this camera has neither in-body nor in-lens stabilisation, making a tripod or gimbal a pretty important accessory.

It was a bit of a disappointment, too. to find that the in-built neutral- denisty filter appears to work only for stills photography, and not for video. That’s a shame, because we were hoping to get some good shallow-focus footage with this camera.

We also found that continuous face autofocus out in the field is a little slow and occasionally erratic – this was with both face detection and continuous AF enabled. For static shots, the autofocus system is very fast and reliable, but with anything moving it does struggle a bit. It’s worth mentioning, though, that the X100V is by no means the only combined stills/ video camera with this issue.

The X100V has a new, sharper lens to do justice to the latest sensor, and the tilting touchscreen on the back makes this camera much easier to use.