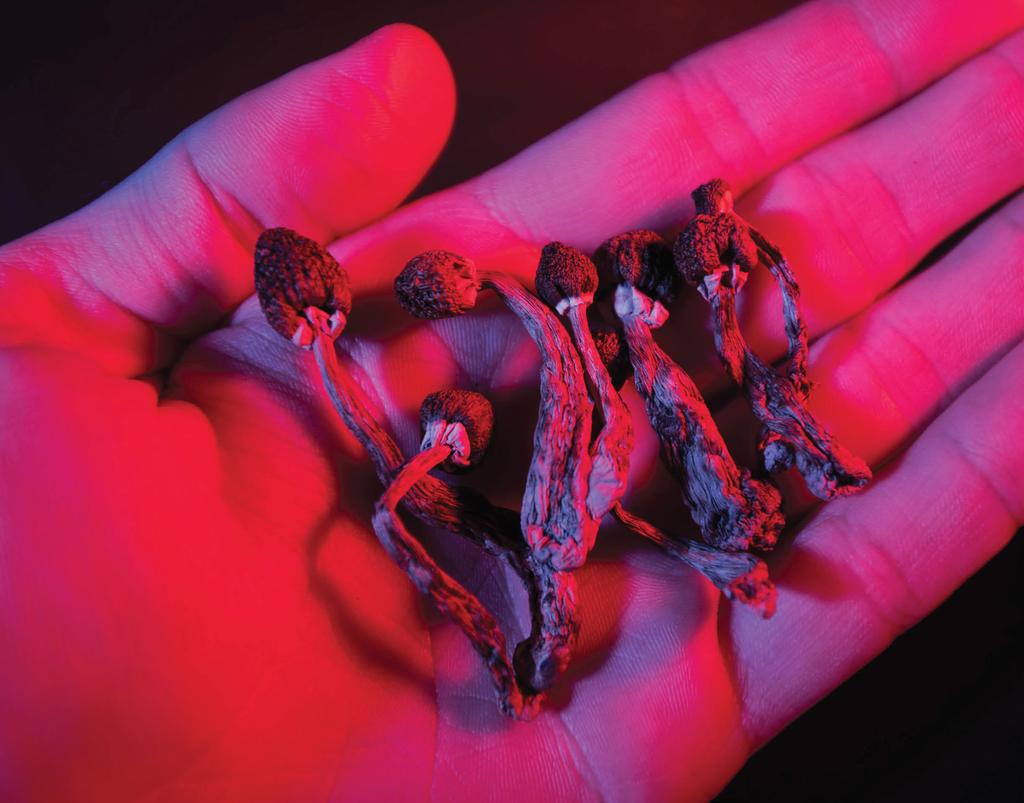 MAY I BE GROUNDED. MAY I BE CURIOUS.

This was my daily mantra from last November through February. Every morning I’d step outside in my bare feet, feel the earth under my toes—even in the snow—and repeat those words internally. Then most days I’d go inside and make myself a matcha, enjoying the sweet, earthy taste before swallowing a piece of the earth itself in the form of 50 milligrams of psychedelic mushrooms.

For about a year prior to taking the ‘shrooms, I felt listless, exhausted, and, eventually, depressed. I considered going on an antidepressant, but hadn’t had a great experience with them in the past. Then, a few friends told me how they’d reclaimed their energy and joy by microdosing magic mushrooms. After reading some studies on the promising potential of psilocybin—the active ingredient in these forest fungi—for easing symptoms of depression, I decided to give it a try.

The Science Behind Psilocybin and Depression

Psilocybin, along with other psychedelics such as LSD (lysergic acid diethylamide, commonly referred to as acid) and MDMA (3,4-methylenedioxymethamphetamine, often called Ecstasy or Molly), has been studied for its ability to rewire your brain for positive thinking.

According to some of the latest research on mushrooms as a drug-assisted therapy, published in a November 2020 report in the journal JAMA Psychiatry, large doses of psilocybin work better than pharmaceutical antidepressants in treating depression. Further, a meta-analysis published last August in the journal Therapeutic Advances in Psychopharmacology suggests that low-dose psilocybin can turn around negative thoughts. Researcher Kim Kuypers, an associate professor in psychology and neuroscience at Maastricht University in the Netherlands, found that microdosing magic mushrooms for weeks—and sometimes months—can help people stay in the present moment, diminish rumination, increase self-compassion, and decrease depressive symptoms.

Still, the results aren’t conclusive. “We don’t know how large-dose, drug-assisted therapy compares to microdosing for treating depression,” says Alan Davis, an assistant professor in social work at Ohio State University and at the Center for Psychedelic and Consciousness Research at Johns Hopkins University, and a member of the study‘s research team.

Dialing in the Dosage

Amid all of this recent research on psilocybin, the practice of microdosing mushrooms has spread like a fungus. Before I started my ritual, I read protocols online (there are many) and found a coach (of sorts) who could advise on the what, when, and how. This was necessary because the information online and from friends was wildly divergent, with recommendations ranging from 50 mg to 150 mg of ground mushrooms on schedules ranging from two to seven days a week, for either weeks or months at a time.

My coach is a trained psychotherapist who runs a drug-assisted therapy business in Boulder, Colorado, and can legally give psilocybin advice (even if he can’t legally administer mushroom-assisted therapy). While other psychedelics, such as MDMA, are in various stages of clinical trials as drug-assisted therapies, psilocybin is still being researched and currently remains illegal in all capacities at the federal level. However, some cities, including Denver and Oakland, as well as the state of Oregon, have decriminalized possession and cultivation of magic mushrooms.

Beyond the liberation that comes with not taking everything personally or needing to ruminate, there also came a childlike giddiness.

I wanted to feel better, more like myself, without feeling like I was tripping. So the first question I asked was: How would I find the sweet spot between too much and not enough? My coach, whom I consider an expert plant medicine practitioner, told me that if you are feeling psychedelic effects, you aren’t microdosing correctly.

After initial conversations about my health and previous experience (I tend to be sensitive to mind-altering substances), we decided I should start with a super-small amount on a schedule of five days on, two days off, for three to four months. This was mild enough that I could always opt to up the dose if I wasn’t feeling better after a few weeks, but not strong enough to push me into the loopy zone.

The Importance of Ritual

I bought a jeweler’s scale and empty capsules on Amazon and got lion’s mane mushrooms and niacin from a local pharmacy. A friend of a friend gifted me a large resealable plastic bag full of magical, dried, green-streaked fungi (they grew them for ceremonial purposes and refused to take cash in exchange).

I promptly got going on crushing, measuring, and carefully dividing the pulverized caps and stems into capsules. There was something both badass and sacred about this process. I was making my own medicine, which meant I got to do the work before reaping the reward. Plus, I was able to infuse my mushrooms with gratitude, sending quiet thank-yous their way before seeing them spin in my coffee grinder.

I made my daily dose a ceremony of sorts, making sure I was connected to nature and focused on grounding. This was also important to my coach, who emphasized the mystical power of plant medicine.

The Power of Psilocybin

At first, I didn’t feel anything except a slight bellyache. That went away in a couple of days.

Then slowly, over the course of weeks, I noticed a mild untangling, like a knot was being loosened. Tendrils and roots unfolded, released, relaxed, and started to reach for connection to something other than themselves.

I was in the process of moving homes—something that would normally have me suffering from manic moments of packing and impatience with my partner, followed by stress hangovers full of regret for the way I’d behaved the day before. But this move felt different. I was able to throw things away that I’d been carrying with me for decades. I started packing early to avoid the mad rush at the end, and while I was horribly sad to move, I was able to identify the grief and sadness and unrootedness I was feeling without letting it unconsciously control me (for the most part).

There was a contentment that came with being a witness to all the feelings; a lightness that allowed me to navigate the dark and heavy with more intention.

I can go-go-go and not realize I’m overwhelmed until it’s too late and the stress has done its number on me, when negativity and impatience leech out of me like corrosive toxic waste. But under the spell of mushrooms, I noticed that I started to find that elusive space between incident and reaction. I started to fill that space with thoughts like, “Isn’t that curious?” or “Look what’s happening here.”

I could start to see the energetic boundaries of myself and the things around me, and I became more aware of what I needed to do to preserve and prioritize my own energy.

For example, my partner likes to debate (and be right), which normally triggers me. I either fall immediately for the bait and try to win the argument, or get entangled and incensed and let it color my whole day. But now my husband’s frustration during a heated conversation was his frustration, it wasn’t mine, nor was it about me. I could watch him spiral with less complication and more compassion.

It was a new type of clarity for me, the kind that comes with compartmentalization. It was the sort of containment that’s only possible from an expansive place.

Beyond the liberation that comes with not taking everything personally or needing to ruminate, there also came a childlike giddiness. Even heavy subjects had elements of joy. There was a contentment that came with being a witness to all the feelings; a lightness that allowed me to navigate the dark and heavy with more intention. It’s not like the sadness went away, but it didn’t permeate and weigh down everything, filling my negative spaces with dread.

Instead, I could name the depression when it came, helping to tame it.

Toward the end of my experiment, I was getting a little anxious about ending, since this had become an important ritual—one that I’d consistently maintained longer than almost any other practice, diet, or discipline I’d tried.

I expressed concern to my coach about my somewhat obsessive behavior with my morning ritual and how I was scared to stop for fear of losing this new perspective I was falling in love with. He assured me I would carry the benefits of my experiment with me for a long time and that my dose was so small I wouldn’t go through withdrawal.

The beauty of this process is that I can maintain my morning matcha and mindfulness ritual without the mushrooms. The psilocybin, or the routine, or the new awareness around entanglement, created a metaphorical mycelium mat in my brain that feels deeply rooted, nourishing, and connected. Every thought that grows from it feels succinct, sweeter, and in service of centering something bigger.

TASHA EICHENSEHER is the former digital director of Yoga Journal and a science writer who has worked for National Geographic News, Discover, Environmental Science & Technology, Nautilus, and more. ■

Tonglen Meditation for a Loving Relationship to the World