The affordable Marantz NR receiver could meet all your cinema and gaming needs, says Steve May. Read our MARANTZ NR1711 Review. 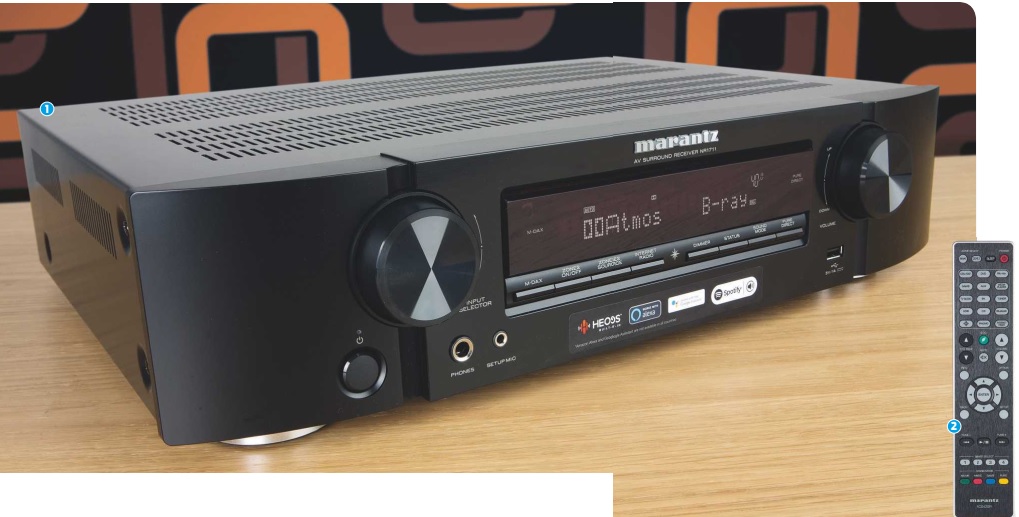 The latest in Marantz’s now long-established slimline, half-height receiver range, the NR1711 is a bijou behemoth for those of us who don’t require unhinged power, but do want advanced connectivity to best work with modern wired and wireless sources.

1. Atmos provision is 5.1.2, with Height Virtualization for ‘flat’ setups

2. The NR handset has been updated with a new 8K button

Standing a shade over 10cm high, this slender AVR cuts a classic Marantz profile, with familiar curved fascia, twin dials and large display. A pull-down flap to hide its front-panel buttonry would make it even more slick, but you don’t get one.

Connectivity is good for the price. All six HDMI inputs support Dolby Vision, HLG, eARC and HDR10+, as well as VRR, QFT, ALLM and QMS. It’s like an explosion in an acronym factory.

The caveat is that only one input, helpfully labelled 8K, supports 4K/120 passthrough and 8K sources at 60fps. And there’s still only one HDMI output.

As widely discussed late last year, next-gen consoles can present a blank screen when connected to a 4K/120- compatible TV input, via the aforementioned 8K input, with titles capable of running in 120fps. It’s a situation Marantz acknowledges, and suggests a firmware solution to this industry-wide bug is being worked on.

An obvious workaround is to connect any offending PS5 of Xbox Series X directly to the display, and use eARC to feed audio back to the NR1711. Alternatively, leave the console and AVR in default 4K 60fps mode. Given this is largely the standard we’re seeing from game developers anyway, it’s a better solution until another option arrives.

There’s another benefit from taking this 60fps approach, as it theoretically frees up the console to use more processing power for ray tracing and shadow detail, leading to superior image performance.

The NR1711 isn’t short of toys. Built-in HEOS is handy for multiroom playback with other HEOS speakers, while Apple AirPlay 2 serves much the same purpose.

In addition to 2.4GHz/5GHz Wi-Fi, there’s Bluetooth, useful not just for streaming podcasts from your mobile, but pairing wireless headphones for late-night/me-time listening. This expanded headphone functionality came to the NR1710 [see HCC #305] in an update after launch, but here’s it’s good to go straight from the box. Twin Wi-Fi/ Bluetooth aerials screw left and right onto the back panel.

Object-oriented audio support covers Dolby  Atmos and DTS:X. Of course not everyone has  physical height speakers, so there’s also Dolby Atmos Height Virtualization and DTS Virtual: X on hand to emulate a 3D listening experience, without the need for dedicated height speakers.

Both modes extrapolate height information to create an enveloping virtual effect. It works well if your physical layout is standard 5.1. The main theme for Okja (Netflix, Dolby Atmos), which plays over the end credits, becomes forest dense and lush. These modes shouldn’t be confused  with the Virtual Movie setting accessed via the remote, which is unrelated legacy processing that should be consigned to history.

Room calibration is via Audyssey MultEQ XT.  A new dual speaker preset allows you to switch settings on the fly, so you can run optimized configurations for different listening conditions.

The NR1711 also has Roon Tested certification,  if you’re into that, plus legacy connections (component, analogue stereo, optical/coaxial digital audio, an MM phono input for vinyl fans), and an AM/FM tuner that I’ll wager 98.7 per cent of buyers won’t ever use.

The sonic signature of the NR1711 is largely unchanged from its antecedents. It’s warm, rather than clinically precise, and a tad less musical than (admittedly more expensive) higher-fi performers up the chain. Yet it’s undeniably fun to listen to, and able to take complex multichannel mixes in its stride.

In fact, there’s no new magic component or sonic glue in use here to fixate over. We’re told some minor tuning has taken place, to mitigate the influence of the new HDMI board, and that’s about as far as it goes.

But that’s no bad thing. The NR1711 is a polished performer, capable of soaring highs and a tight, fast attack. At its best, and when not pushed overly hard, it’ll keep pace with any lauded AV amp selling for several hundred quid more. It’s intended for use in living room setups, not driving an IMAX. Stick to that and you’ll be fine.

Where it naturally shines is with immersive music; I found Dolby Atmos tunes via Tidal grin-inducing.

Tonally this is also a lovely performer, as evidenced by the Dolby Atmos mix of John Williams Live in Vienna, with the Wiener Philharmoniker. Placing you centre-stage during Raider’s March, instruments are as much delineated by their distinctive timbre as their spatial position.

The NR1711 does blockbusters well too. When Mysterio lands amid swirling green mist at the beginning of Spider-Man: Far From Home (4K Blu-ray), this receiver delivers a pressure wave that ripples through the room. Shock waves blast out from the front soundstage, and it’s not just Nick Fury diving for cover.

Marantz has nurtured the high-current discrete power amplifier section in these models over time, to a point where their transient delivery mimics workhorse AVRs costing considerably more.

Of course, it’s not just scale and volume that impresses. Often the most immersive performance is told in small, subtle details. The Maiden demo for Resident Evil Village (PlayStation 5) has an eerie, unsettling multichannel soundmix. As you make your way from a dank, bloody cellar to creepy mansion, the NR1711 unnerves with perfectly placed clanking cell doors and worrisome thuds. When one of the ghoulish sisters whispered over my shoulder, my blood ran cold. Nicely played.

When it comes to affordable, easy-to-integrate home cinema, the Marantz NR1711 has it nailed. It’s well-specified, with copious wireless connectivity options and a few new tricks, not least provision of 4K 120fps support, and 8K where available, that will make it a tempting upgrade for existing owners of earlier NR models.

Best of all, it performs far more purposefully than the slimline form factor might suggest

3. Despite the modern feature spec, this AVR still offers plenty of analogue inputs

MONITOR AUDIO BRONZE: Not the brand’s entry-level, but still eminently affordable, Bronze is where MA debuts its first Dolby Atmos upfirer. The Bronze AMS is designed to sit neatly on the Bronze 50 bookshelf or Bronze 100 floorstander.