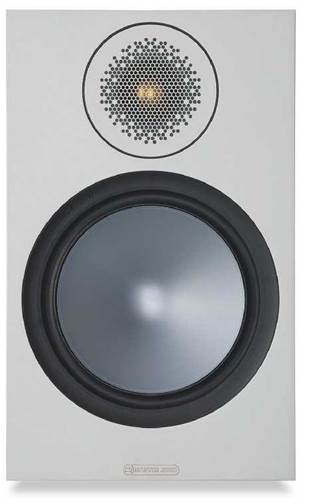 Is it brave to label a loudspeaker series ‘Bronze’, with the implication that its models are worse than second-best? Monitor Audio doesn’t seem to think so, and has been using its precious metal hierarchy long enough for its Bronze lineup to now be relaunched in sixth-generation guise, five years after a previous update [HFN Feb ’16]. The promise, as always, is of speakers that hit the price/performance sweet-spot via trickle-down driver tech, while looking good, too. Silver, Gold and Platinum are ranged above, and below you’ll find the Monitor series, presumably because Copper felt like a step too far…

For this ‘6G’ release, Monitor Audio has overhauled the entire range. This means that in addition to the Bronze 100 here, there’s a smaller Bronze 50 bookshelf and two floorstanding models – the Bronze 200 and Bronze 500. Home theatre builders are also catered for with centre channel, surround (dubbed ‘FX’) and Dolby Atmos speakers, plus an active subwoofer.

TO SIT OR STAND?

Monitor Audio describes the Bronze 100 as a bookshelf/standmount model, but its actual size might make it little tricky to use as the former. At approximately 380x230x325mm (hwd), this loudspeaker isn’t one that you can place anywhere comfortably. Standmounting makes more sense, but note that Monitor Audio doesn’t make a Bronze­specific option, and that its Stand model – designed primarily to partner its Gold 100 speakers – sells for £ per pair.

The speakers’ detailed manual gives recommended placement as between 15cm and 30cm from the rear wall, at least three feet from side walls, and 1.8m to 3m apart to create an equilateral triangle a

with your listening position. Accepting that these optimal conditions might not be a possibility for every Bronze 100 end user, particularly regards rear wall proximity, Monitor Audio provides a pair of foam bungs to plug the speakers’ HiVe II reflex ports. The latter are a long- running brand speciality, first introduced in 2006, and are both rifled and flared to reduce turbulence. A key difference over the previous Bronze 2 standmount – these speakers’ closest relation – is that the reflex port is now rear- rather than front-facing.

Accounting for the Bronze 100s’ girth is their star attraction, a 200mm bass/mid driver. This is the same unit used on the range-topping Bronze 500 floorstander, and an unusual find in a market dominated by 135mm and 165 mm units – indeed, the aforementioned Bronze 2 used a 165mm bass/mid. Made from Monitor Audio’s bespoke C-CAM composite it also debuts Damped Concentric Mode (DCM) technology here, an FEA- optimised architecture of the driver cone and surround said to further improve linearity and combat breakup modes. C-CAM is used again for the Bronze 100s’ ‘Gold Dome’ high-frequency drivers [see PM’s boxout, p67], as it is on the step-up Silver series [AMT tweeters are preferred for Monitor Audio’s Gold and Platinum models – see HFN Aug ’19].

A new refinement here is the Uniform Dispersion Waveguide, which aims to better control off-axis dispersion from the slightly recessed dome tweeter and fine­tune time alignment with the bass/mid.

Furthermore, it also allows for a lower crossover frequency – 2.2kHz, rather than the 2.4kHz of the sixth-generation Bronze 50 or the 3.1kHz of the older Bronze 2.

HIP TO BE SQUARE

Despite the affordable price tag, there’s nothing ‘budget’ feeling about these cabinets. Chunky, gold-plated binding posts support bi-wiring, and while there are right angles wherever you look (which makes the rounded magnetic cloth grilles a bit incongruous), it’s a handsome, modern aesthetic and arguably more appealing than the slightly rounded edges of the Bronze 5G models. Build quality is solid, without ever reaching premium levels.

The speakers weigh 7.8kg each and use 15mm MDF enclosures internally braced to limit vibration, with additional rigidity coming from the bass/mid driver installation itself, which sees it anchored via a large bolt that connects to the rear [p69]. This system also works to decouple the driver from the front baffle. A head on the back is provided to tighten the bolt fixing via a provided Allen key, as Monitor Audio suggests it may ‘become loose over

time’. Protecting the 25mm dome tweeter is a grille with an acoustically transparent ‘hexagonal dispersion pattern’. Flush to the baffle, rather than gently protruding as before, this adds yet another slice of contemporary appeal.

Finish options are more varied than usual, with Black, White, Walnut and a new, on-trend Urban Grey to choose from. There’s a two-tone approach to the styling too, with the front dressed in either satin dark grey (for Black and Walnut) or satin

light grey (White, Urban Grey). The silver mid/bass drivers and gold- coloured tweeters bring a level of visual charm that many other speakers around this price lack.

Worthwhile successors to the highly-rated Bronze 2s, the Bronze 100s provide a level of enjoyment that’s over and above their down-to- earth asking price. While the 200mm bass/mid drivers catch your eye (and ear), there’s a thrillingly unfettered treble here that adds sparkle and openness to recordings, joined by a midband performance that’s expressive and nicely attacking. Lively and energetic, these are value for money personified.

Of course, they’re not a genuine ‘budget’ model, while some consideration when it comes to both placement and port use reaps rewards. Mounting the Bronze 100s on a stand and giving them room to breathe results in a performance at its most refined, with an even handling of bass notes providing a strong foundation. Place them on a cabinet close to a rear wall, and while they certainly acquire more bass energy, they lose a little composure.

With Queen’s ‘These Are The Days Of Our Lives’ [Innuendo; Parlophone CDP 79 5887 2], there’s a bump to John Deacon’s basslines that makes them sound voluminous and unduly dominant when speakers and rear wall are ignoring social distancing guidelines. Thankfully, the supplied port bungs temper this effectively and reveal more subtlety and inflection to his playing, meaning the Bronze 100s can be put to work in close quarters if required.

And as befits affordable loudspeakers, these are eager to please and easily driven, despite the medium sensitivity [see PM’s Lab Report, p69]. Even paired with a budget – and modestly powered – Marantz NR1710 receiver, they sparked into life and delivered an upbeat performance.

This Queen track also enabled the Bronze 100s to flaunt their imaging ability. With the speakers set about 2m apart and toed in so that their sides receded from view, the various conga-drum hits were precisely located within the soundstage, just as Brian May’s lead guitar playing deftly hung in the middle. Even those listening off-axis will enjoy the wide throw of Monitor Audio’s C-CAM tweeters.

Some may prefer the extra boost to the low-end that boundary positioning brings, but in truth MA’s newly-designed bass/ mid driver and the sizeable cabinet that surrounds it don’t require assistance when it comes to adding weight and scale to rich­sounding tracks. Black Sabbath’s ‘God Is Dead?’ [73; Vertigo 3735426] is mixed to be cavernous, and that’s exactly the effect here, with Tony lommi’s ominous intro riding a wave of bass and percussion that seemed to flood my listening room. As the track progresses, and overdriven guitars join the affray, there’s a crunch and drive that is hard to believe is created from these affordable

Whether you choose the light or dark grey baffle, the glint of MA’s gold-coloured 25mm C-CAM tweeter is always visible through those honeycomb perforations

in its protective cover. This forms part of the ‘Uniform Dispersion’ (UD) waveguide, acting like a sophisticated phase plug. At the heart of these Ceramic-Coated

Aluminium Magnesium drivers – tweeter and bass/mid – is an alloy core, chosen for lightness and stiffness, to which is applied the ceramic material to further enhance rigidity without significant weight increases. The dome tweeter boasts an especially wide response for an entry-level loudspeaker but, as we saw with the Bronze 2 model [HFN Feb ’16], while its first break-up mode is deferred to a high 29kHz, the resonance is unmistakable [see p69]. PM 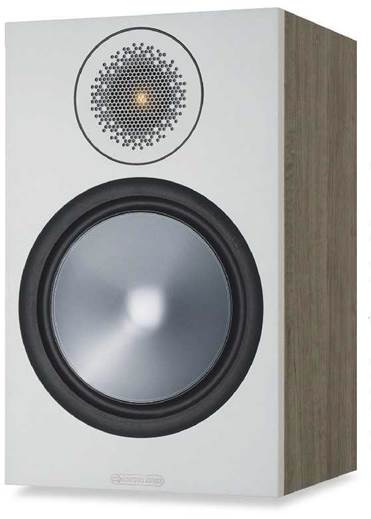 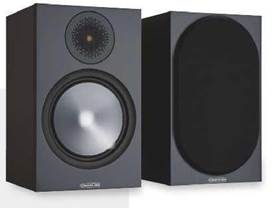 enclosures. OK, to call them compact would be a misnomer, but the Bronze 100s remain small enough to be acceptable in a variety of environments without sounding boxed in or apologetic.

Frankly, there’s little here not to like, beyond a tendency for some male vocals to be conveyed with a little shyness as they battle against the speakers’ treble purity and low-end heft. For example, Chris Martin’s plaintive verses in Coldplay’s ‘The Scientist’ [A Rush Of Blood To The Head; Parlophone 540 5042] didn’t project quite as well as the sweet­sounding piano accompaniment. But this was a rare misstep during my time with these standmounts.

As for that open treble, it’s everywhere, giving air to the synth motifs and hi-hats in Patti LaBelle’s disco anthem ‘Stir It Up’ [Beverly Hills Cop OST; MCA DMCL 1870], and the rimshot rhythms of The Bee Gees’ ‘How Deep Is Your Love’ [Tidal download, 44kHz/16-bit].

This latter track is about as easy as I like my listening to get, and Monitor Audio’s duo perfectly sets the mood, being just the right side

of bright and not too ponderous. There’s a crisp edge to the vocal harmonies that’s enticing rather than fatiguing, yet other elements of the mix are silky smooth.

Likewise, with music that’s more about aggression and drive, such as The Stone Roses’ bluesy ‘Driving South’ [Second Coming; Geffen Records 24503], the Bronze 100s’ low frequency control and energetic approach fits the bill, a mixture of cohesion and devil-may- care attitude. Voicing here doesn’t obviously favour one genre over another, or put emphasis on recording quality – which in this market is how it should be. So it would be churlish to make too much of these speakers’ deficiencies when the asking price is so appetising and the appearance so attractive.

Mostly, they get so much right that it’s impossible not to see them as a bargain. Bronze may not be the most precious of metals, but there are precious few speakers that offer this all-round appeal. Blending sonic charm with statement styling, they’re fit for a podium finish.

Five years after the Bronze 2 set budget buyers’ tongues wagging, Monitor Audio has released a replacement that aims for even bigger and better things. Admirable performers whatever you throw at them, the Bronze 100s are always fun to listen to thanks to their killer combination of bass weight and delectable highs, while the contemporary aesthetic and easy-to-drive nature will find them plenty of fans.

Despite the Bronze 100’s compact dimensions the specified 87dB sensitivity is not overly optimistic, the newcomer achieving a mean sensitivity of 87.7dB (500Hz-8kHz) without recourse to an evil impedance trend. MA quotes a minimum of 4.5ohm and this was proved on test with 4.6ohm occuring at 37Hz, close to the Helmholtz resonance of the reflex port, and again at 160Hz where, in both cases, the attendant swings in phase are within ±15o. The highest phase angles are also experienced at low frequencies but -49o/86Hz and +45o/63Hz are accompanied by a reasonably benign 11ohm load, so a 6ohm nominal impedance is wholly justified here. The Bronze 100 will be an easy enough drive for most competent budget amplifiers.

Measured on MA’s preferred axis (between bass and treble drivers), the response trend is flat to within an impressive ±1.6dB (200Hz-20kHz) while pair matching between the two speakers was better than 1dB over the same span [see Graph 1, below]. Fitting the grille [blue trace] causes a small loss in presence/ treble output while the small notch at 900Hz corresponds with a resonance detected from the port and also seen, along with minor driver modes at 3-4kHz and 10-20kHz, on the CSD waterfall [Graph 2]. The ‘C-CAM Gold Dome’ tweeter resonance occurs at 28.6kHz/+5dB [within the pink ultrasonic band of Graph 1] but the CSD [Graph 2] indicates this is swiftly quelled. Diffraction-corrected summed nearfield measurements [green area, Graph 1] show the bass falls away below 80Hz, following a +2dB lift from 90-140Hz, although the 51Hz extension (-6dB re. 200Hz) will be further improved by near-wall siting. PM 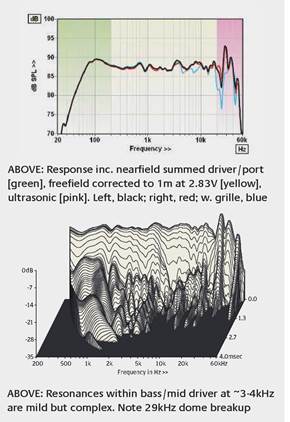 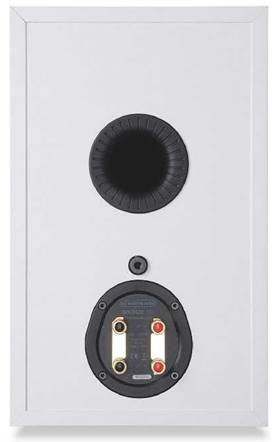