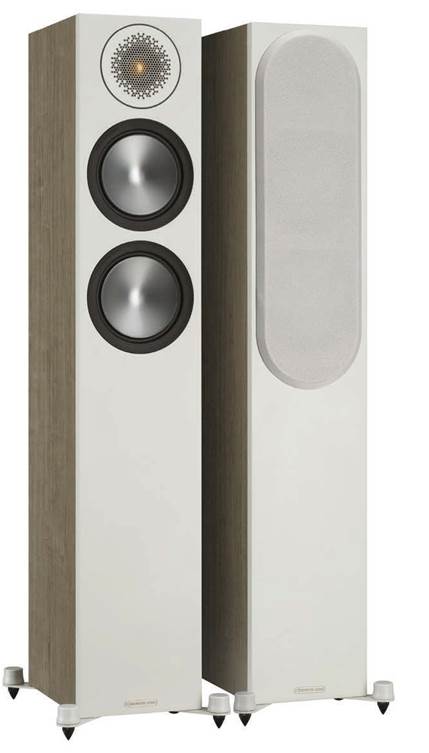 Money-no-object, no-holds- barred, uncompromised and uncompromising loud­speakers are dead easy to build. Just use the most expensive and highest-performing components you can find, commission a hot-shot industrial designer to help with the looks, spend as long as you like in the ideal environment tuning and fettling – and there you go. A high-performance loudspeaker with the price-tag to match. The world is far from short of them.

Building a loudspeaker to hit a specific price can be tricky, though – and when that price is so competitive as to make compromises inevitable, it becomes trickier. If the speaker is from a brand with an auspicious global reputation that can only be damaged should this speaker not live up to expectations, well – ‘tricky’ and ‘trickier’ suddenly become ‘trickiest’.

Monitor Audio introduced its budget­conscious ‘Bronze’ range back when the world was young (or 1998, to be absolutely accurate). Through its subsequent generations, the Bronze range has been, if not outright class-leading, certainly there-or- thereabouts where affordable ‘proper’ hi-fi speakers are concerned. Any number of student loans have been invested in Monitor Audio Bronze speakers, and any number of audiophiles will acknowledge the Bronze as the gateway drug that hooked them into a lifelong habit.

► routinely reviews mains cables that cost more than £, ‘affordable’ is a difficult descriptor to argue with.

Despite that eye-catching asking price, though, there are no overt signs of corner-cutting where the specification, build or finish of the Bronze 200 is concerned. The Urban Grey finish of our review sample (white, black or walnut are also available) is actually quite sophisticated, and the smoothly chunky 21mm front baffle is tactile and entirely free of screw-heads and the like. The rest of the cabinet is of 15mm MDF, vinyl-wrapped and internally braced for optimum rejection of unwanted vibrations. The overall dimensions result in a tidy and discreet foorstander, which is precisely what customers demand these days (particularly those who might favour ‘Urban Grey’ as a finish).

At the rear of the cabinet there are a couple of Monitor Audio’s carefully rifed HiVE II bass reflex ports – one is quite near the top of the cabinet, the other quite near the bottom. The lower port is positioned just above the gold- plated biwirable speaker binding posts, which join the crossover via oxygen- free silver-plated copper cable.

Each speaker stands on four individual ‘outrigger’ spiked feet. They’re a nice colour-match for the cabinet and they do their job admirably, but they add a little to the 22 x 30cm footprint of the cabinet itself. Nevertheless, if you take colour, finish and dimensions into account, the Bronze 200 are among the most unassuming and easy-to-position foorstanders around. And there are foam bungs for the reflex ports in the packaging, too, in case you’re tempted to push the Monitor Audios up hard against a rear wall.

Behind the magnetically attached grilles, the Bronze 200s feature a 25mm C-CAM gold dome tweeter and a couple of 140mm C-CAM mid-bass drivers. Monitor Audio has been convinced of the efficacy of ceramic-coated aluminium/magnesium as a driver material for almost thirty years now – it will happily rhapsodise about the material’s lightness/rigidity ratio. Here the mid/ bass drivers are in a continuous profile arrangement – and while I don’t for a moment doubt the rigorous engineering principles behind this, it also adds to the rather tastefully understated aesthetic of the speaker as a whole.

The gold dome tweeter has been a Monitor Audio favourite even longer – it was first introduced all the way back in 1986. It too is an aluminium/magnesium alloy coated in ceramic, which is then gold-anodised for ideal stiffness and damping – the company reckons the first order of breakup is beyond 35kHz and up into dog-whistle territory. Here the tweeter is sitting behind the company’s Uniform Dispersion Waveguide – it’s a hexagonal arrangement, broadly speaking, acoustically transparent and visually quite dramatic.

Monitor Audio is claiming a frequency response of 35Hz to 30kHz, which – on paper, at least – looks quite a big ask of two very modestly proportioned mid/bass drivers. Crossover frequencies are an unremarkable 700Hz and an interestingly low 2.4kHz.

As far as performance goes, it’s important to a) keep price uppermost in your mind and b) not partner the Bronze 200 with anything wildly inappropriate. Therefore b) is taken care of by all the critical listening being conducted using Marantz’s evergreen PM6006 stereo integrated amplifier as the engine. Sources extend to Rega’s Planar 1 turntable (with Planar 2 tonearm, admittedly), a venerable (for which read ‘elderly’) Arcam CD73 disc player and an AudioQuest Beetle Bluetooth DAC for use with both Android and iOS smartphones. The

“There’s plenty of dynamic variation on show when the band begins to politely force the issue.”

► connection between Marantz and Monitor Audio is made using QED XT25 speaker cable.

And because a) is equally important, the suggestion of tonal warmth and absolutely bog-standard level of detail retrieval when listening to a 180g vinyl reissue of Pink Floyd’s Meddle [Pink Floyd Records] needs to be put firmly into context. The Bronze 200 may err on the side of caution, but they’re nevertheless an engaging and musically adept listen.

Certainly they’re not short of bite or attack at the top of the frequency range, that hint of heat notwithstanding. The combination of gold dome tweeter and Uniform Dispersion Waveguide serves up a wide, yet properly focused, top end – and it has the body and substance to prevent the treble attack becoming wearing.

The story is pretty similar in the midrange. The tonal balance is skewed, slightly but definitely, towards the warmer side of neutral – but, if anything, it rather suits the overall sound of Fearless in general and David Gilmour’s vocal in particular. This heat doesn’t translate to a lack of rigour, either – the Bronze 200 demonstrate good control of the midrange, particularly where attack and decay are concerned. And there’s plenty of dynamic variation on show when the band begins to politely force the issue as the song reaches its Anfield Kop conclusion.

Switching to a CD copy of Life Without Buildings’ Any Other City [Tugboat] allows the Monitor Audio to demonstrate an equally authoritative way with the lowest frequencies (as well as confirming the claim for a 35Hz frequency response as optimistic in the extreme). The repetitious, locked-groove attack of New Town is given proper propulsion by the speakers’ ability to snap into and out of bass sounds with real positivity – rhythmic expression is, as a result, very decent. There’s worthwhile texture to low-end sounds, too.

The soundstage the Bronze 200 describe is hardly what you’d call ‘expansive’ but it’s cogently laid out and never sounds crowded. And while they’re not quite from the ‘whisper to a scream’ school of dynamic potency, they breathe deeply enough to make the peaks and troughs of a recording plain. And it’s a trait that lends itself to more modest listening environments – these speakers do what they do without demanding a huge amount of space in which to do it.

Taken in isolation, there’s next-to nothing to take serious issue with here. But, of course, nothing is ever heard in isolation – and by the standards of seriously affordable floorstanding loudspeakers, the Bronze 200 are just a little hazy and indecisive where the details are concerned. Oh, it’s not as if they’re giving a huge amount of information away – but listen to Roots Manuva’s Sinny Sin Sins [Big Dada] and some of the intricacies and tiny harmonic details go astray. There’s virtually no impact on the musicality of the Monitor Audio presentation, and consequently virtually no impact and how enjoyably listenable these speakers are – but if you audition price­comparable rivals from other entry-level heroes like Q Acoustics or DALI you may find the Bronze 200 lack a little insight.

They make up for it in other areas, though. Those alternative designs have to acknowledge Monitor Audio supremacy where control is concerned, and no rival describes a more coherent or better organised soundstage. But if the devil (or, more accurately in this instance, the last soupcon of sonic enjoyment) is in the details, it’s possible to be left a little frustrated by the Bronze 200 delivery.

But – at the risk of labouring the point – context is everything. Given that a floorstander at this sort of money is, by definition, compromised, Monitor Audio has minimised and disguised the compromises it’s made to an almost laughable degree. If your system justifies this sort of outlay, you need to hear the Bronze 200. +