When it comes to PC cases. NZXT usually comes fairly close to nailing it, but for a lengthy period, the company completely lacked a mini-ITX case. Read our NZXT H1 Review. 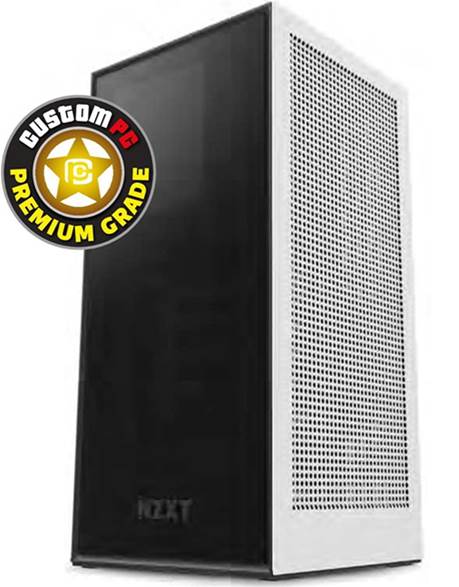 It had small form factor designs years ago, such as the Rogue case, but until the H200 landed much more recently, its been a mostly ATX-sized affair. We’ve since seen plenty of very interesting mini-ITX case designs, many of which have a skyscraper tower design, with tiny footprints, but enough height to rival some ATX cases. However, even the likes of the Phanteks Shift can’t compete with NZXT’s H1.

For starters, the case is tiny, making the already dinky Phanteks Shift look decidedly overweight by comparison. It stands less than 40cm tall, and its square footprint sits at 187mm on all sides, yet it has the ability to house pretty much any mini-ITX PC you can throw at it.

The price tag is also eye-watering, but there’s a good reason why this case costs over twice as much as Fractal Design’s already expensive Era ITX (see p20). NZXT includes a 650W SFX-L 80 Plus Cold PSU with the H1, as well as a basic 140mm AIO liquid cooler and a PCI-E riser cable. So really, that price tag gets you around £ worth of extra hardware on top of the case, which you may well need to buy for a new build anyway.

The exterior is perhaps a little Xbox Series X-like, but with a very different cooling arrangement. Three of the four sides sport mesh vents, so airflow shouldn’t be a problem, with the third side using tempered glass, so you can see the interior. A large U-shaped section sits over the top of the case and makes up two of the vented side panels, which both act as intake areas as standard, and are suitably equipped with large dust filters.

The other side panels pop into place and anchor the larger section too. In short, there are no screws required to open the case. Meanwhile, the roof offers a pair of USB 3 ports, 4-pole audio port and a Type-C port, which requires a full-fat Type-C USB 3.1 header on your motherboard to work.

Internally, the H1 is extremely compact. Large parts of the case can be dismantled, thanks to its extensive screw- together construction, and there’s next to no CPU cooler height clearance either, so it’s clear that NZXT has designed the interior around the supplied liquid-cooling system.

This also means that you’re barely able to see your hardware either, although if you have an Nvidia RTX Founders Edition graphics card, or another card with an illuminated logo on the side, you can see this logo through the tempered glass panel. Incredibly, you can even fit 305mm-long dual-slot graphics cards in the H1, with their ports sitting at the bottom of the case and fans pointing towards the vented side panel. This should mean that even high-end GPUs can be cooled adequately.

Thermal paste is pre-applied to the 140mm AIO liquid cooler’s pump section, so you just need to fit it to your motherboard and connect the usual cables and you’re nearly ready to go. The cables include a 4 -pin fan cable that powers the pump and fans, plus the power cables that NZXT has already neatly laid out and cable-tied inside the case. 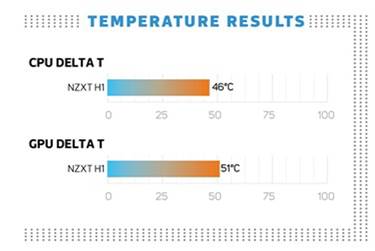 The radiator pops out from the case to let you install your components more easily and, despite the tight confines, working with this case is remarkably simple. However, we weren’t able to use our usual Corsair Vengeance RGB Pro memory modules, as there’s a memory height limit of 45mm, so you’ll need to check your memory height too.

Another limitation is the lack of 3.5in hard disk support. There’s only room for 2.5in SSDs, with a pair of mounts in a bracket in the roof. Also, while the SFX-L PSU sits on its side, with an extension cable running to the base of the case allowing you to plug in your kettle lead, the actual PSU power switch can’t be accessed with the side panels installed.

The design is mostly very well thought-out, although there’s a couple of niggles. There are several areas around the base of the case that could let the GPU exhaust air recirculate back up towards its fans, but this is only likely to be small issue, and one that’s limited to cards that exhaust most of their air out the rear. Even with open coolers, though, one side of the case is made from tempered glass, so air being expelled this way needs to find another way out of the case. 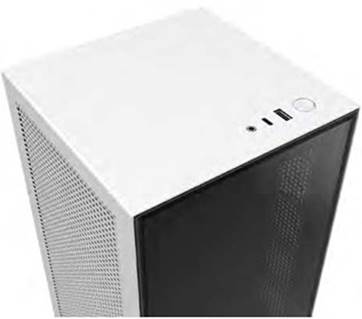 As our usual test kit wouldn’t fit in the H1, we had to compromise and use a different set of gear. Not wanting to give the case an easy time, we opted for a Gigabyte X570 I Aorus Pro WiFi motherboard and an AMD Ryzen 9 3950X, along with an Nvidia GeForce RTX 2070 Super Founders Edition. We configured the system to respond as it would at default settings. The CPU delta T of 46’C was well away from any thermal throttling, with an absolute temperature reported in Ryzen Master of 69’C, so it’s clear that the 140mm cooler is quite capable.

The GPU delta T of 51’C was also reasonable, and the graphics card remained quiet throughout testing too. The same can’t be said for the radiator fan, which did spin up to quite noisy levels at full speed, but there’s certainly a little leeway there to rein in the fan speeds in your motherboard’s BIOS.

It might be a little plain-looking from the outside, but the H1’s tiny stature and well-designed interior makes it a capable chassis, even for high-end systems, as long as you don’t mind being spoon-fed a specific PSU and AIO liquid cooler.

The cost might seem high, but you’re getting a liquid cooler, 650W SFX PSU and a PCI-E riser included too. The storage options mean you’re probably limited to SSDs unless you want to use 2.5in hard disks, but the H1 is otherwise a superb home for a gaming or content-creation-focused mini PC. It has an exceptionally tiny footprint, and it also kept our hardware cool, despite a lack of dedicated case fans.