We’re very familiar with NZXT’s Asetek-based AIO liquid coolers these days, as there have been several generations of successful products, which have often picked up CPC awards in spite of stiff competition from the likes of ARCTIC and Corsair. The company’s Kraken coolers haven’t received an update for a number of years, but it’s now released several new coolers, including the X53 we’re looking at here.

The Kraken X53 is the successor to the X52, and it uses a 240mm half-height radiator, so it sits at the bottom of the new stack, with 280mm and 360mm models above it. NZXT has apparently introduced its 7th-generation pump with it, although it has very similar credentials to the one used on the older cooler, with a speed of up to 2,800rpm. However, the Kraken X53’s pump can apparently spin down to 800rpm, which is half the speed of the old cooler.

The two units use identical NZXT Aer P120 fans, which spin between 500rpm and 2,000rpm, dishing out a claimed noise of 21-36dBA. However, the X53 lacks software fan control. As such, while the pump hooks up to your PC using a USB cable via a spare USB 2 header, and can be controlled using NZXT’s CAM software, the fans will need to be hooked up to your motherboard.

We were a little disappointed not to see a fan splitter cable to make cable tidying easier as well. That’s a shame, as it was previously possible to have the fans respond to the coolant temperature, rather than the CPU temperature, which can result in a far quieter, but no less effective cooling system. It’s still useful to be able to control the pump, though, as it becomes audible at full speed, and dropping this speed didn’t have much impact on temperatures.

Other new bits include a 10 per cent bigger RGB LED ring on the waterblock unit, which still includes the Kraken X52’s holographic infinity ring design. This still looks great, but it ultimately isn’t much of an improvement compared with its predecessor, with precious few new features. The same can be said for a lot of new coolers from various manufacturers though.

However, the whole top can now also rotate, so you don’t need to worry about trying to orientate the NZXT logo when you install it, as you can now do that afterwards. The tubing and barbs are identical too, with the latter still freely rotating, so you can orientate the tubing to suit your radiator position.

The radiator itself has the usual half-height design, and it measures 30mm thick and 275mm long, so it should fit into any area that claims to offer space for a 240mm radiator. The 400mm tube length should also allow for installation of the radiator in the roof or front of your case in all but the biggest chassis. Installation will feel very familiar to anyone that’s used an Asetek-made cooler from the likes of Corsair or NZXT before, with the included plates securing to the pump section to allow mounting to Intel LGA2066 and LGA115x sockets, as well as AMD’s Socket AM4.

However, you’ll need to fish around in your Threadripper CPU’s box for the adaptor AMD includes for Socket TR4 and TRX4 motherboards. All the mounts, except Socket AM4, use four-point mounting mechanisms and thumbscrews, while the AM4 mount relies on two clips in conjunction with the stock mounting mechanism on AM4 motherboards. Thermal paste is, as usual, pre-applied, so be extra careful not to dislodge it, as there’s no spare paste in the box. Of course, this also means you’ll need to invest in some paste if you upgrade your CPU.

Meanwhile, the accessory box includes enough fan screws to install a second row of fans, enabling you to boost cooling in a future upgrade. There are also smaller screws to mount the radiator directly to your case, which you’ll likely want to do if you mount it in the roof. 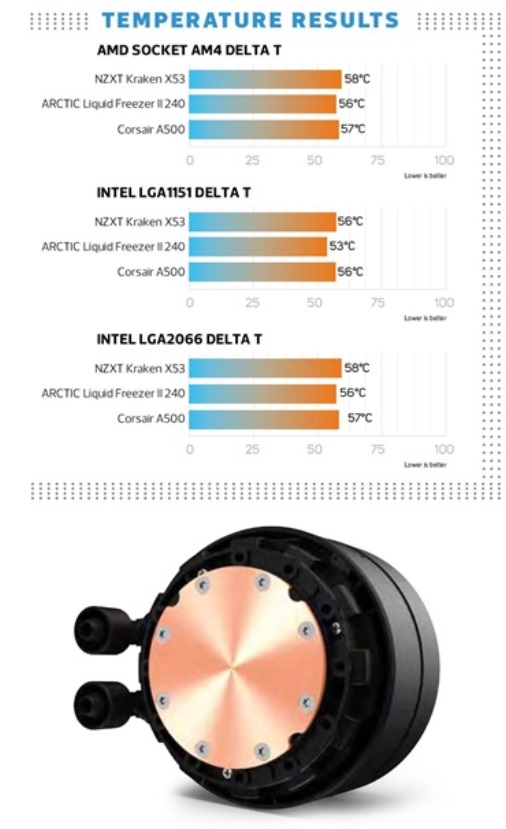 Finally, we come to the cables. The pump is powered by a SATA cable, which also doubles as an RGB cable, allowing you to connect other NZXT HUE RGB products. Meanwhile, a micro- USB cable connects the pump to a USB 2 header on your motherboard.

We only have a slim number of cooling results since we updated our test systems, but overall, the Kraken X53 performed slightly below the ARCTIC Liquid Freezer II 240, sitting a degree or two behind it in all three of our systems. The biggest gap was in our LG A1151 system, with 3’C separating the two. In two tests, even the cheaper Corsair A500 air cooler managed to pip the X53 to the post, albeit with far higher noise levels. The ARCTIC Liquid Freezer II 240 was a little louder at full speed too, and also includes a small VRM cooling fan, but in general, the Kraken X53’s performance sits roughly where we’d expect, given the fan speed and radiator size.

The Kraken X53 is a fine CPU cooler, but nothing really leaps out to make you want to buy it over the competition. The removal of software fan control definitely loses it brownie points too. If you’re forced to use software rather than your motherboard’s EFI to control the pump, then why not tie in fan control here too? It seems counterproductive to use two different pieces of software to control different parts of the same cooler, although admittedly you’ll probably only need to set it up once.

With a price tag of well over £, you’d expect fan control as part of the package, especially when the ARCTIC Liquid Freezer II 240 outstnps it in terms of performance, if not in aesthetics. However, we can’t argue with the solid performance, snazzy, expandable RGB lighting and ease of installation. The ability to fine-tune the pump speed from the comfort of Windows is a boon too. It’s just a shame NZXT didn’t link more control features to its software.