It’s been a longtime since we’ve reviewed a motherboard from a brand other than the usual four, and while samples of NZXT’s previous boards were hard to get, NZXT was keen to send us one of its latest motherboard – the N7 BSSO. As its name suggests, it’s a Socket AM4 motherboard that uses the BSSO chipset, so it’s compatible with AM D’s Ryzen 3000 and 5000-series CPUs. 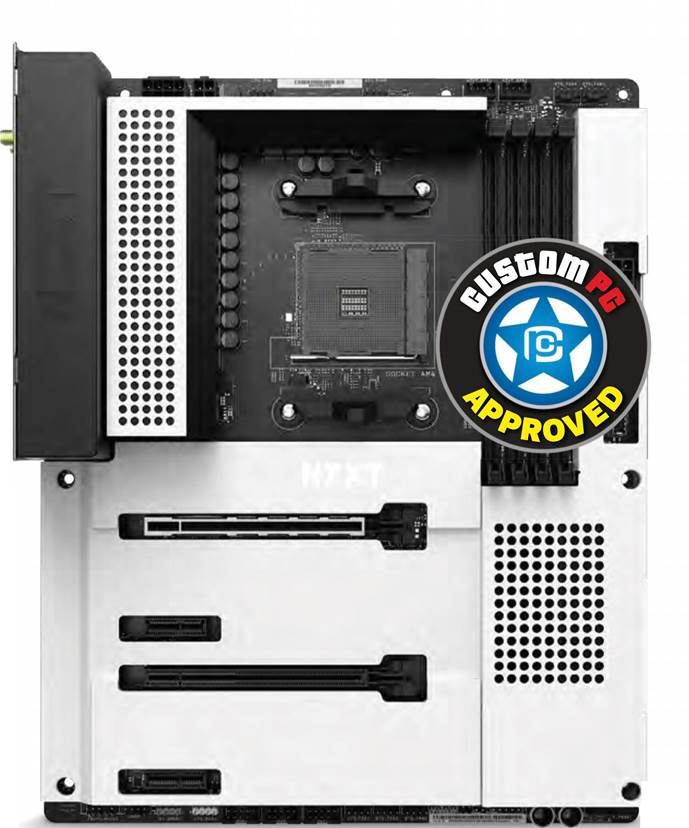 It’s not cheap, though, and that price is probably dictated to some degree by the enormous shroud covering the PCB. Available in white or black, it’s the board’s key feature and it looks extremely smart indeed. Another unique feature is support for NZXT’s CAM software, which you may know from its Kraken AIO liquid coolers, giving you full control over each fan header’s response curve with presets or manual control.

There are even more adjustment points than in Gigabyte’s new fan control suite in the Z590I Vision D’s EFI (see p18), although you can only select the CPU and GPU for the temperature input. The software can also control the board’s RGB lighting headers, and overall, it feels much more polished than any other motherboard software we’ve used.

The downside is that, if you prefer to tweak your cooling from the EFI, there’s no snazzy user interface, as you get on other motherboards. That’s a little surprising, as NZXT hasn’t made the EFI or indeed the motherboard itself, but has partnered with ASRock, which does have an admittedly basic fan utility in its EFIs. The EFI is unmistakably an AS Rock design, but that’s as far as any familiarity goes.

Meanwhile, the N7’s 12+ 2 power phase design is cooled by two large heatsinks that kept the VRMs below 55°C under load in testing. Sadly, the M.2 SSDs slot covers don’t act as heatsinks, though, and our PCI-E 4 SSD actually began to throttle to half its rated speeds during our stress test, so you’ll need to leave these caps off to improve M.2 airflow.

The rest of the PCB is well laid-out, though, with a generous count of seven fan headers, on-board power and reset buttons, and a Type-C USB header too. NZXT has angled the six SATA 6Gbps ports and dual USB 3 headers, so they sit underneath the edge of the shroud, making for a super-clean look and leaving just the essential large power connectors in full view through their cut-outs in the shroud. It’s definitely a very good-looking motherboard, which will appeal to those who prefer a minimalist look.

The rear 1/0 panel has a decent array of features too. While there’s no LED POST code display on the PCB, tweakers and overclockers benefit from a clear-CMOS button and a USB BIOS Flashback button here. 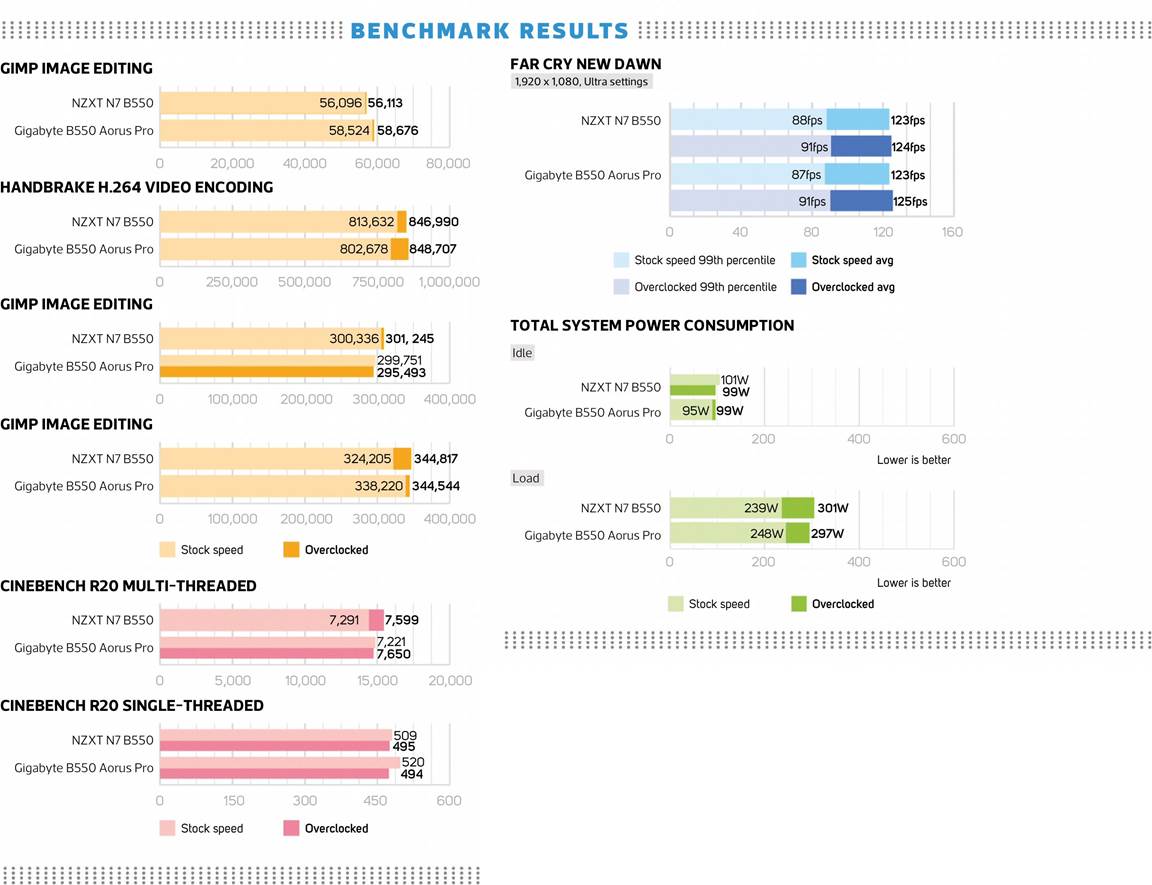 The total of nine Type-A USB ports is great as well, and all but two of them are USB 3 or faster, and get a full-fat USB 3.1 Type-C port. The full complement of audio jacks are hooked up to a Realtek ALC1220 audio codec, and you get an optical output as well. Also on the back you’ll find the aerial connectors for the 802.llax Wi-Fi, a 2.5 Gigabit LAN port and, if you plan on using an APU, an HDMI port.

It’s been a while since we’ve tested a BSSO motherboard, so we’ve run our usual suite of tests with the Ryzen 9 3900X for comparison, but also tried overclocking the Ryzen 9 5900Xas well. We hit the usual4.3GHzwith 1.4Vusingthe former and 4.6GHz with 1.25V with the latter, so the board is easily capable of overclocking both Zen 2 and Zen 3 CPUs.

The overclock saw the multi-threaded score rise from 7,291 to 7,599 in Cinebench R20, although as usual, the single-thread score fell as the overclock disabled boosting. All our RealBench tests saw an increase, though, with the system score rising from 324,205 to 344,817. Audio performance was on par with the competition too, with a dynamic range of 105dBA and noise level of -104dBA, while the M.2 speed with our PCI-E 4 SSD hit 4,997MB/sec read and 4,276MB/sec write with the socket cap removed .

There aren’t many white BSSO motherboards, and the NZXT N7 undoubtedly looks fantastic, with a choice of black and white models, and its shroud extending over the PCB. It’s a great choice if you’re planning on picking up a white case, cooler and graphics card.

We’d like to see future iterations of the board work M.2 heatsinks into the design, though, and swap the plastic M.2 caps for metal ones that act as heatsinks to prevent throttling. Removing the caps to use M.2 SSDs also spoils the look. Installing a PCI-E riser cable can also be a problem with the shroud.

However, the extra features, such as CAM software fan and lighting control, power, reset and clear-CMOS buttons, Wi-Fi and an abundance of Type-A USB ports, are all useful. This is a great motherboard, especially if the added aesthetic features appeal to you.

A fantastic-looking B550 motherboard with plenty of features, although the plastic shroud causes a few issues.