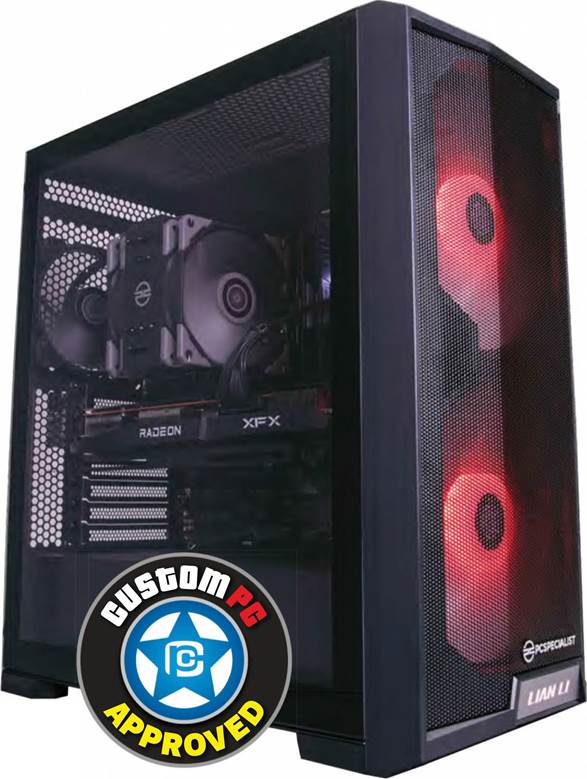 PC Specialist’s all-AMO system aims to deliver well-balanced mainstream performance in games and content-creation workloads, and it starts with a Radeon RX 6700 XT graphics card. XFX makes the card in this machine, and while there are no overclocks on this Speedster card, it still has base and boostfigures of 2321MHz and 2581MHz, and it serves up 2,560 stream processors, plus a large 12GB of memory.

The 6700 XT can also handle ray tracing in games, thanks to 40 AMO Ray Accelerators, but unlike Nvidia’s RTX cards, it can’t get a helping hand from DLSS, and at the time of writing, AM D’s rival Super Resolution tech isn’t yet available.

It’s paired with an AMO Ryzen 5 5600X CPU, which has six SMT-enabled cores, and here it runs at its conventional base and boost speeds of 3.7GHz and 4.6GHz. ltfaces new competition from Intel’s cheaper Core i5-11600K, but PC Specialist has still priced this machine sensibly atfl,349 inc VAT. Unusually, the CPU is chilled by air rather than liquid, but the PC Specialist Frost Flow 150 air cooler and its two fans don’t impede the internals.

Those AMO core components are solid, and the rest of the PC Specialist’s hardware is decent. The 16GB of dual­channel RAM runs at 3600MHz, and the 500GB Seagate Fire Cuda SSD uses the PCI-E 4 interface. There’s also a 1TB hard disk, and a Corsair TX 650 M power supply, which has a semi-modular design and 80 Plus Gold certification. It’s all welcome in a PC atthis price, and it’s all covered by a three year labour warranty with two years of parts coverage.

It has loads of spare fan connectors and a Thunderbolt header, and the rear 1/0 panel sports eight USB ports split between different speeds. It’s a very capable mid-range board, although it’s worth bearing in mind that the second M.2 connector doesn’t support PCI-E 4, and you don’t get any on-board buttons or displays. It looks quite bland too, with no RGB LEDs, but those are minor complaints in a machine at this price.

It’s all packaged into a Lian Li Lancool215 case, which looks decent thanks to its two glowing 200mm intake fans. Elsewhere, it’s a conventional mid-tower case, with a PSU shroud, tidy cabling and rubber grommets around the cable­ routing holes. At the rear, it offers a fan hub, two 2.Sin drive mounts and room for one 3.Sin hard drive. The cables are a little untidy at the back, but that’s not a big deal.

The PC Specialist lines up against last month’s Scan 3XS Gamer RTX. At the time of writing, the latter is still available forfl,299 inc VAT, and it uses an Intel Core i5-11600K and an Nvidia Ge Force RTX 3060. It has twice as much storage as the PC Specialist and a year of on site warranty service, but a weaker motherboard. 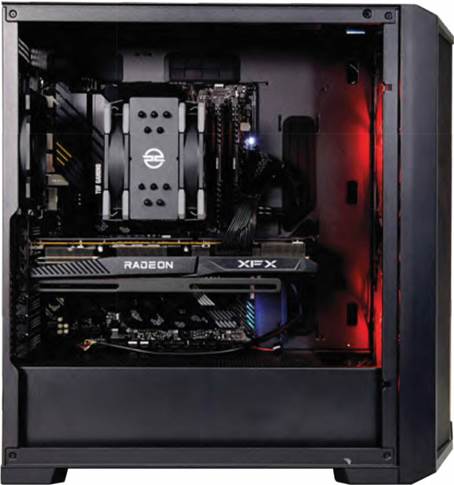 The Rad eon RX 6700 XT comfortably handles 1080p gaming. In Assassin’s Creed Valhalla and Cyberpunk 2077, it returned 99th percentile minimums beyond 60fps, and it even averaged 53fps in Metro Exodus with ray tracing enabled, and nearly hit a 60fps 99th percentile with that technology disabled. It played most games smoothly at 2,560 x 1,440 too, although it couldn’t handle ray tracing in Metro at the higher resolution.

This card will comfortably play single-player games at those resolutions, and its Doom Eternal results show it can churn out high frame rates in less demanding games too – you could happily pair it with a 240Hz 1080p monitor. This GPU is far quicker than the Scan’s RTX 3060 and a little faster than the RTX 3060 Ti in some tests as well. Its only weak point compared with the Nvidia competition is ray-tracing performance and the lack of an equivalent of DLSS.

The PC Specialist’s AMO processor also has a comfortable lead over the Scan’s Intel Core i5-11600K, with better scores in our benchmarks and a significant lead in multi-tasking, helped by the 3600MHz memory. This PC’s overall score of 231,815 is more than 31,000 points ahead of the Scan machine. The SSD’s read and write speeds of 4,931MB/sec and 2,542MB/sec are also solid, with the former outpacing PCI-E 3 drives.

While this PC is fast and offers good value, though, it does produce noticeable, consistent fan noise – the noise output isn’t ruinous, but it’s always present. It isn’t a problem if you use hefty speakers or a headset, but it’s not ideal if you want an environment where you can concentrate in near silence. 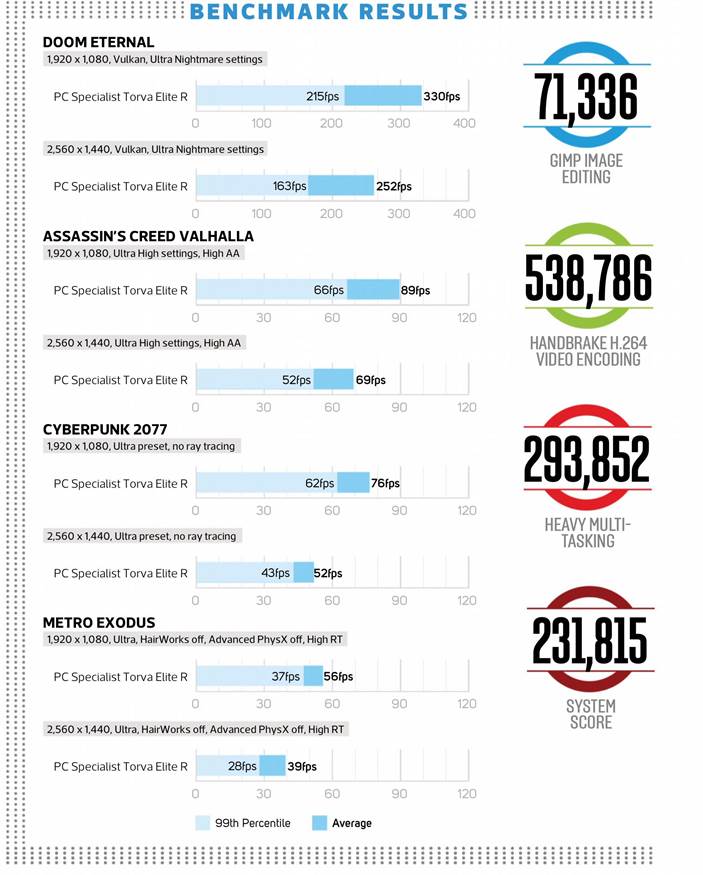 Happily, the ever-present fans work well in terms of cooling; internal temperatures were acceptable, and the CPU easily attained its 4.6GHz turbo speed.

The Torva’s AMO GPU and processor outpace the Nvidia and Intel gear we’ve seen in other similarly priced machines, and elsewhere, this machine offers a fast SSD, a feature-packed motherboard and a solid warranty. Conversely, the Torva’s fan noise is pretty loud and the Radeon graphics card has patchy ray-tracing support. Many people won’t be affected by those negatives, though, and this PC provides ample mainstream gaming and work power for £1,349 inc VAT, which is excellent in the current climate.

Great gaming performance for a very reasonable price in this current climate, although it’s also noisy and the GPU’s ray­tracing performance isn’t brilliant.