Sitting on its charging stand like the sought-after artifact on a pedestal in an Indiana Jones movie, this Basilisk Ultimate certainly has the looks. This is a wireless gaming pointer with no expense spared, from the 20,000dpi sensor and 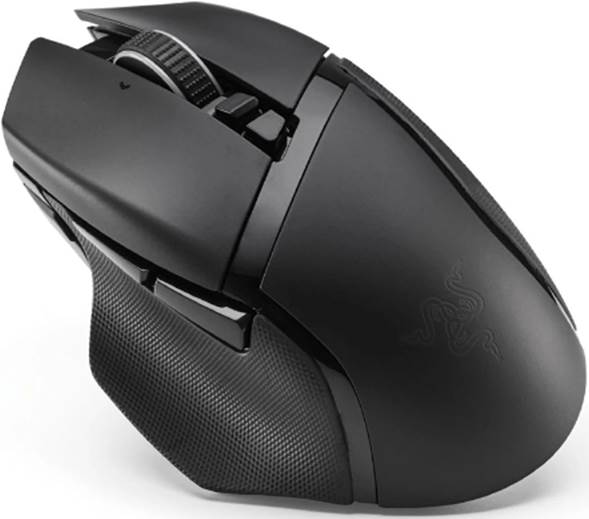 100-hour battery life to the RGB dock, the luxurious materials forming the body around it, and a host of subtle design touches that all combine to make life a little easier.

It’s a gorgeous mouse. While the standard Basilisk model is bogged down in unsightly grooves along its inner side panel, this features a textured, rubberized finish at either side, which functionally improves grip and aesthetically preserves a clean, professional look.

Only the asymmetrical ergonomic shape jumps out as an obvious through- line between Basilisk models, in fact. It’s a body best used in palm grip, but also comfortable in claw or fingertip style— though not quite as naturally suited to the latter as smaller ambidextrous models such as Razer’s own Viper Mini, the Zowie FK2, or the Glorious Model 0 Minus.

Forward and back buttons sit perfectly integrated into the lines of the left-hand side, and further toward the front sits a removable DPI clutch, ready to kill your sensitivity when you need total precision in FPS games. If you don’t like the sound of that, a rubber stay can be plugged in instead.

Elsewhere, there’s a pair of DPI switches to cycle between up to five modes on the fly. a mouse wheel with two additional inputs by nudging it sideways left and right, and two beautifully scalloped oversized mouse buttons covering Razer’s mechanical switches. If you have any reservations about dropping this much dollar on a mouse, its appearance alone will assuage them.

We just wish it was easier to play competitive shooters with. This being a wireless model, it just can’t look wired mice in the eye when it comes to response time, and has an almost ethereal “feel” when you’re in game. Yes, the wireless receiver is subtly elegant, as much as a small lump of plastic can be, and yes, it’s nice that there’s a recess on the underside of the mouse for storing the receiver when you take your setup on the road. But when the bomb’s down on A, and you’re 1v5 with low HP, you’d trade it all for a simple cord. Razer says its own wireless tech is 25 percent faster than any of its rivals, but there are still occasional moments of noticeable dropout or latency.

Maybe it’s the wireless, the weight, the small PTFE feet, or some combination of all of them, but we actually noticed a consistent drop in K:D when using this versus a wired Viper in CSGO. So, sadly, it’s not ideal for your competitive shooter of choice where marginal gains matter. In that setting, Razer’s much cheaper Viper Mini is a better pick, benefitting from massive and super-smooth PTFE feet and a super-light 68g total weight, which combine beautifully when you’re making big movements across the mouse mat— especially important for low-DPI players.

Where the Basilisk Ultimate does shine, though, is in, well, everything else. Offline shooters, strategy games, workstation use. whatever you generally click in day-to-day life, it all feels a bit more luxurious with this under your hand. Ultimately, the high-end peripheral market is about treating yourself more than seeing tangible benefits in gaming performance or functionality, and in the field of treating yourself, Razer is king.

Enter the RGB options and feature-rich (to the point of bloated) software. Both the mouse and dock are fully customizable, the former over 14 individual zones via the Chroma app. Synapse, the meat- and-potatoes software component, allows for DPI tweaks and button behavior mapping. Having to create an account land thus share social media or email details with Razer) is a drag, but you can’t knock the functionality.

It’s a heart over head purchase, then. It might not be esports-grade in performance, but the look and feel are very seductive. 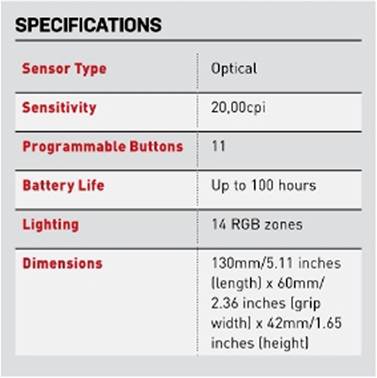