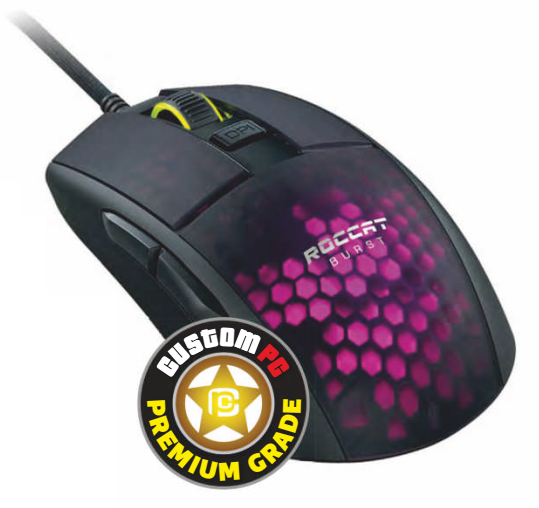 Roccats Burst Pro isn’t quite what you’d call cheap, but in a world of seemingly simple gaming mice going for upwards of £, this new ultra-lightweight gaming rodent is a relatively affordable option. In accordance with its modest price, you don’t get a lot of extra features, but there’s plenty of the latest technology and trends in mouse design included here.

The headline figure for this mouse is its weight. It tips the scales at just 68g, putting it right up against the lightest mice around, such as the Glorious PC Gaming Race Model 0 and Endgame Gear XM1. It couples this weight with a design that incorporates the new trend for perforating the chassis of the mouse with hexagonal holes to save weight. Here, though, Roccat has skinned over those holes with a translucent layer, so the mouse still has a smooth surface but you can see the holey structure below.

Roccat has tried to highlight this structure by adding RGB lighting inside the mouse, creating a backlit effect. It looks okay, with the rear portion of the mouse being clearly illuminated, but the lighting is rather uneven across the rest of the mouse. You also get an RGB-lit scroll wheel, and you can add effects and sync up both lighting zones via Roccats software.

The mouse’s shape is ambidextrous and relatively compact, with an overall length of 120mm and width of 58mm. This makes it ideal for fingertip grips for all hand sizes, while those with small hands could use a palm or claw grip. In comparison, the Glorious PC Gaming Race Model 0 is 8mm longer and nearly 8mm wider.

Although ambidextrous in shape, the Burst Pro doesn’t have extra buttons for left-handed users. Instead, you get just the basic selection of left, right and scroll-wheel click at the front, back and forward on the left side, and a single DPI button behind the scroll wheel. For right-handed users, it’s a sensibly laid out selection, with all the buttons proving easy to reach without being too easy to hit accidentally. The scroll wheel also offers a clear detent scroll system, and it’s easy to press its button without nudging the scrolling.

The two main left and right buttons use Roccat’s Titan optical switches, which are rated for a whopping 100 million clicks and, like other optical switches, claim to have a faster response than metal-contact switches that require a short debounce delay. In practice, we haven’t been able to tell the difference between optical and metal switches, but overall the Burst Pro’s buttons do feel very responsive.

A modern-style lightweight highly flexible cable trails from the front of the mouse, ensuring you don’t get any annoying push-back from the cable in the heat of battle. The very large gliding pads on the underside also do their job very well.

The compact shape, sensible button layout and light weight of the Roccat Burst Pro make for an excellent high-performance gaming mouse. It’s agile, responsive and precise. A bulkier, more contoured mouse such as the Razer DeathAdder V2 Pro is more comfortable for daily desktop use, but its relative bulk isn’t so great for fast-paced gaming. If fast-paced gaming is your priority then the Roccat Burst Pro is a superb, affordable gaming mouse, and it won’t get full of dust either.