The Sonos challenger in the Atmos-equipped soundbar market, the Arc proves worth waiting for, though not without its quirks. Read our Sonos Arc Review.

+ Smarts include all the benefits of the Sonos system

It’s one of those busy years for Sonos, a company which only periodically updates the products that comprises its wireless multiroom system, compared with the more traditional hi-fi approach of releasing new models each year. Sonos often instead updates software to confer new abilities on products old and new. But it had a glitch in that regard recently, when it announced that the new S2 operating system, which debuts along with the Arc, will not support some older Sonos products. To be fair, it’s only the very earliest Sonos products that are excluded, and after a backlash from its users, Sonos has released a two-tier software solution where you can isolate the oldies in a retirement zone of their own.

Meanwhile the Arc arrives, and has to justify costing almost twice as much as the smaller Beam soundbar, which continues in the Sonos line-up. And Sonos comes late to the Atmos party, so can its soundbar make a splash?

The Sonos Arc is certainly designed to partner the TVs of today, being 114cm wide, stretching the width of a 49-inch TV and a good match for a 55-incher or 65-incher; indeed it’ll look rather oversized with anything smaller. By comparison the Playbar was only 90cm wide and the Beam a total titch at less than 70cm.

The Playbar was designed to work in two orientations, depending on whether it was wall-mounted or placed on a piece of furniture (it sounds better wall-mounted). The Arc is orientated the same way regardless of positioning, but still automatically adjusts its frequency response accordingly, though unlike nearly all the other soundbars in this group, the wall-mount kit is not included, and sells for $ extra.

This is not, thankfully, a bar which attempts to create surround effects merely by processing — it uses genuine drivers for each channel, with a total of 11 in all, driven by 11 Class-D amplifiers. Eight of the drivers are elliptical woofers — four along the front for the left, centre and right (the centre gets two, reinforcing dialogue, though not in an MTM arrangement, so the tweeter is off-centre), plus two on top delivering height information, and one in each end firing outward to deliver a ‘surround’ effect. The final three drivers are silk-domed tweeters built into the front, though with two firing out diagonally into the room, a neat trick to widen the soundfield.

So the configuration here is 5.0.2. That ‘0’ can be turned into a ‘1’ through the addition of a Sub (Sonos has just announced a third-generation version), bearing in mind that it’s is a subwoofer. You can also re-purpose two other Sonos speakers to act as dedicated surrounds, though you’d then be pushing the all- inclusive Sonos Arc system price up towards $, at which point you should consider Sennheiser’s AMBEO soundbar as a competitor (if you  have the space — it lacks the Arc’s visual elegance, but its sound is a level above).

In addition to using its array of speakers to bounce sound off your walls  and ceiling, the Arc uses Sonos’s Trueplay technology to tailor its sound to your room. While we’ve found this room correction technology to be a waste of effort on some of the company’s smaller models, there’s far more reason to try it here given the wall-bouncing stuff going on; it tunes the Arc’s output to account for ceiling distance, angles and acoustics. Note, however, this is still only available for iOS devices; Android mikes are just too variable for Trueplay to work reliably with Android devices.

Once it’s in position, most of what you can see of the Arc is the rounded grille that hides the array of front-mounted and up-firing speakers. Each end also features a grille-covered driver.

The curvy design helps mask the Arc’s dimensions and makes it look svelte, but its height of 8.5cm is not inconsiderable. If it covers the bottom of your TV picture you’ll need to consider wall-mounting your TV. But if it blocks only the IR remote receiver then you’re OK, thanks to the Arc having an integrated IR repeater, and (more sensibly than some rivals) enabling it by default.

The Arc’s own status light consists of LEDs that shine through four holes above the subtle Sonos logo. By default, these LEDs remain off most of the time and even when they are lit (for example, when adjusting the volume), their brightness is tailored to the ambient light in the room, a nice touch.

A play/pause touch ‘button’ is flanked by two context-sensitive touch panels that you can use to control volume. To the right are the microphone button and a single LED that indicates whether the Arc is listening for Alexa or Google Assistant voice commands.

Round the back sit the power socket, Ethernet for wired networking (there’s also Wi-Fi), and a single HDMI output, no inputs. An optical-to-HDMI adapter is included for those with older TVs, but the intention is that you use HDMI’s ARC (Audio Return Channel) functionality to get the sound from your TV to the Arc. The Arc supports both ARC and eARC (the enhanced Audio Return Channel), so it can handle Dolby Atmos signals from TVs that can output it.

We were immediately heartened by the Arc’s information feedback to the app, which flags when Dolby Atmos is being received, while the ‘About My System’ pane confirms the format in which it is being transmitted. That’s handy, as it lets you tweak your TV’s menus until you get the real thing, compared with some of the other bars in this group that may display Atmos briefly on initial receipt, but with no better feedback than that. Of course some TVs, especially those which don’t yet have eARC, won’t pass anything except stereo, or will only go as far as Dolby Digital 5.1, not the Dolby Digital+ required to carry Atmos from streaming services. And 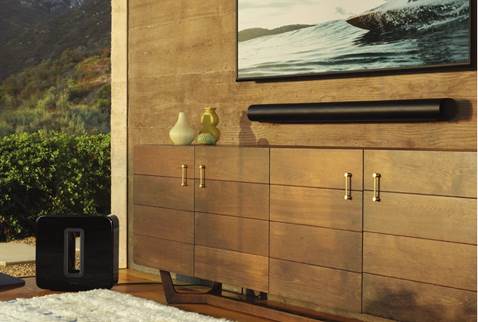 with no additional HDMI inputs, you can’t even plug your AppleTV or Blu-ray player in to enjoy Atmos directly. That makes the Arc a true match only for TVs from 2020 and some from 2019 — although if you use it now with an older telly, well, things will only get better when you next buy a new TV!

Bass and treble can be adjusted in the Sonos app, and the Loudness function can be disabled there, too. There’s also a Night Sound feature that flattens dynamics and reduces bass, which is ideal for when you don’t want to wake the rest of the household, while Speech Enhancement aims to project dialogue more clearly.

It’s easy to play music through the Arc without touching the Sonos app at all; it appears as a playback device in Spotify and Tidal, and has AirPlay 2 so can be made the default output for iOS devices or a Mac computer. It can also be controlled via Alexa and Google Assistant, with the four far-field microphones spaced along the chassis able to pick up your commands, doing quite well even when music or movie plays at volume.

With Dolby seemingly licensing the Atmos badge to anyone willing to pay the fee, it has become little guarantee of anything (see our Sony soundbar review). But Sonos has taken the addition of Atmos seriously, and the Arc delivers a more convincing Atmos presentation than most soundbars, and can energise a room with immersive sound. With the bombing run scene from Unbroken it delivered great atmosphere for the wind noise and whirr of engines, and achieved specific placement of incidental creaks and rattles, including some effective ‘bounced’ surround. Both the height and surround bouncing do rely on your room shape, so that vaulted ceilings or wide rooms will reduce the effectiveness of the system. Dynamic shifts were handled with aplomb, with the first fly-by of the Japanese fighter plane and the machine-gun fire from the Liberator’s emplacement rocking the room, even at around a quarter of the Arc’s volume. It achieves quite some depth even without adding a Sub, while dialogue is clearly presented along with treble that is clear and sparkly, and without the over-brightness the old Playbase used to exhibit.

That tonal evenness helps make the Arc one of those soundbars you can double up as a music source. With Radiohead’s 15 step it delivered effective space and rhythm, with each instrument given space to breathe even during the track’s busiest moments. But Sonos uses all of the Arc’s drivers during stereo playback, which may hamper the purity of sound; it would be good to be able to select a ‘stereo’ option using only the front-firing drivers, as do most other loaded soundbars. Instead the sound goes everywhere, rather than projecting forward and towards the listening position.

Aside from its lack of purity for music (where it remains enjoyable), the Sonos proved a stunning performer in the right room, capable of a highly immersive movie experience with genuine use of Atmos and ‘widened’ surround elements. And of course you have the full Sonos suite of services built-in, along with multiroom operation and voice-control, plus the option of putting other Sonos speakers behind for genuine. Sonos may have taken its time developing the Arc, but it delivers in all key respects.