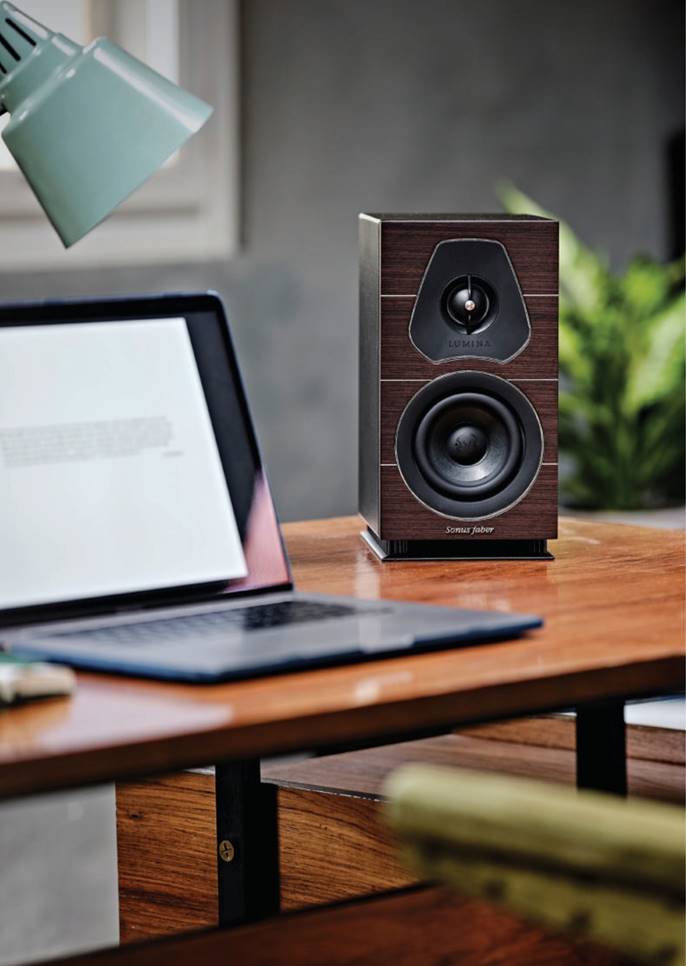 One of the more remarkable things about the Lumina II speakers is not the luxurious leather wrap or their multi-layer wood construction, despite the superbly luxurious feel these features bestow on these Sonus faber standmounts. Nor is it the fact that the two lowest models in the Lumina range represent the most affordable entry-point ever to the Italian brand’s highly desirable wares.

No, what’s more remarkable still is a small label on the back, which will be entirely hidden once you have banana plugs inserted into the top pair of the bi-wirable or bi-ampable speaker binding posts on the rear of each cabinet. ‘Made in Italy’, it says there.

That’s not ‘Designed in Italy’, note — and then made in China, as are so very many ‘European’ loudspeakers, especially at the affordable end of a company’s ranges. The Luminas really are built alongside the company’s highest-end designs in Italy, where Sonus faber has its headquarters in beautiful Vicenza, and continues to champion Italian heritage and craftsmanship. It has very recently acquired the De Santi woodworking factory in San Martino di Lupari in Padua, an establishment with which it has collaborated for 25 years, now establishing the facility as the official woodworking department within the company, and investing in new CNC routers and painting capabilities “to enable more innovative designs and unique customization opportunities”, it says, “with decreased production lead-time and increased output”. Perhaps here, then, is the secret to Sonus faber’s future ability to deliver Italian-made speakers at affordable prices.

The Lumina IIs are speakers that immediately banish any fear of failing to meet the famous ‘Partner Acceptance Factor’, or PAF, formerly WAF, since they are both nicely compact in size, and entirely beautiful in appearance. Real leather wraps around the sides and top of the MDF cabinet, with all the edges squared — Sonus faber’s design department says this emphasises the quality of materials used, while straight edges are also, of course, cheaper to implement than curves. But the leather bends naturally as it wraps around the edges anyway, so there’s not the sharp lines of a bare wood joint. The front plywood panels, meanwhile, look glorious in their coverings of walnut or wenge wood veneers, with attractive horizontal lines of maple inlay, and thin silver surrounds to the drivers.

A gloss piano black finish is also available; this finish lacks the horizontal inlay stripes which give the Luminas such a distinctively sophisticated appearance, but might be preferred by those hiding the Luminas in a darkened theatre room. For those in rather brighter conditions, take note of the manual’s suggestion to “position the loudspeakers away from heat sources or windows, above all during the summer months… Avoid exposing the loudspeakers to direct sunlight.”

On first inspection we thought the Lumina IIs to be sealed boxes, unusual in this level of standmount, but in fact they port to the front — which is good for versatility of positioning, including going close to walls. “The beauty of the new Lumina collection,” says the company, “is that they can be placed virtually anywhere and will still deliver a breath­taking performance”.

So here the port is hidden in a gap below the speaker, where it sits on a moulded plastic base, which we had initially thought to spoil the feel a bit when we had unboxed them, though once they’re in position you barely notice the bases, and they’re doubly forgivable once you know they’re hiding the ports, thereby leaving you to fully enjoy the attractive baffle and the distinctive drivers.

Those drivers are the company’s own D.A.D. (Damped Apex Dome) tweeter, as also used in the company’s higher Sonetto series, featuring a Kurtmueller hand-coated soft-silk diaphragm of 29mm diameter, mounted using visco-elastic baffle decoupling, and a 150mm mid-bass cone driver made with a blend of traditional cellulose pulp and other natural fibres, in what Sonus faber calls an “ultra-free compression basket” promising “ultra­dynamic performance” and high linearity.

There were no complications with set-up; the Lumina IIs have twin sets of high- quality binding posts for connection, with jumpers in place on arrival, but removable if you wish to biwire or biamp. Here the full Lumina manual may confuse readers momentarily, implying you can tri-wire or tri-amp these speakers, and referring you to un-numbered illustra­tions beyond the multilingual text of the manual, the triwiring versions of which we couldn’t find, and which presumably refer anyway to the larger floorstanding Luminas. You can’t triwire or triamp the two-way Lumina II. But it’s a reminder that the Lumina range extends to provide everything you need for a full surround system, including a centre-channel and the aesthetically-matching Gravis subwoofer models. In such a context the Lumina II, as the larger standmounts of the series, might hold a very solid rear surround position.

But they’re also designed to satisfy as a stereo pair, which is the context in which we listened. We began, unusually, with solo harp, as we had a high-level SACD player temporarily in the system so were pulling out our often-underutilised SACD collection. This is an impeccable recording of Anne-Sophie Bertrand by Katzenberger Music, and it requires a system able to deliver both rapid transients and dynamics to sound any fun at all. We began fairly quiet, and the first piece, by Albeniz, almost passed us by. We cranked it more for the second, Faure’s Impromptu pour la Harpe, and the Luminas responded beautifully, with ping-sharp harp notes delivering real percussion as well as tone to Bertrand’s playing, and clearly relishing the chance to perform at a higher level, in this case with high-quality power from Canadian Classe amplification.

The Lumina IIs had just the right level of cut- through in the mids and in the high frequencies; indeed these were perhaps their highlight sonic strengths…

We moved up in complexity to Mike Garson’s jazz six-piece ensemble (Reference Recordings 1990), again requiring a clear-headed speaker to deliver its full quality, and here we soon enjoying scintillating reproduction of Bill Mintz’s intricate snare and cymbal work on Without Self, the timbre and detail held in place impeccably throughout the rise and fall of the ensemble. Garson’s Jarrett-like piano (and moans) was a delight through the Luminas, both the expansive tone of heavier bass chords and the rapid — extremely rapid at times — runs during his first solo of that track, prior to the saxophone entry. So open did all this sound that we were tempted to extremely high playback levels; these sounded spectacular during the more open moments, though the crescendos of the piece revealed some ultimate limit to the resolving power of the Lumina IIs under duress.

This note of caution continued into more raucous rock-n-roll; the speakers generally performed with brilliant resolution of detail and soundstaging right up to a point at which we found ourselves reaching for the remote to drop them back, a tad, to restore restraint.

We had expected relative smoothness and sweetness in the highs, as is Sonus faber’s reputation, but we wouldn’t say that of the Lumina IIs, which had just the right level of cut-through in the mids and high frequencies; indeed this was perhaps their highlight strength.

Duran Duran has a new release, Falling, which features, coincidentally, the piano playing of Mike Garson again, less frenetic, less jazzy and more ballad-orientated here, and richly delivered on the opening of the track through the Sonus fabers, while Le Bon’s vocal sounded both creamy and brightly aspirated; the bass entry was strong too, being in the instrument’s higher registers, though dropping back in power when going lower. The inherent bass response of the Luminas does drop away slowly, so that while you can hear them responding as low as the 30s of hertz, the bass doesn’t reach its full power until up around 110Hz. That means that if you’re after a solid driving bass under rock music, the Lumina IIs might fall short of your needs in that regard. When we played Clapton’s 2007 San Diego concert, these speakers gave us every twang and slide of the guitar, but left the overall sound rather light, Willie Weeks’ contribution to the ensemble underplayed. Yet they threw out some low stuff on occasion: Placebo’s Surround By Spies has electronic bass at low G and even Eb, and you could feel this emerging from the Luminas, if not to the gut-resonating level that larger speakers can pull from the recording.

Of course that makes the Lumina IIs a fine candidate for subwoofer support in stereo, as they would also receive in any surround system, where you’d have all the benefits of their precision and cut-through, plus the supporting depth in which they seemed a little shy when listening to them alone in stereo configuration.

On one blog post, Sonus faber goes a bit overboard with the naming rights here. ‘Lumina’ in Latin means ‘light’, of course, “but also a source of energy and life”, gushes the company. It then goes on to break down the name almost acronymically: ‘Lu’ is for luxury, it says, ‘mi’ for minimalist design, and ‘na’ for natural sound.

‘Natural’ is a good description of the open and detailed sound produced by the Lumina II, which comes from a range the company says represents “an exciting change… that aims to reach a wide audience…”, by which of course they mean that it’s a more affordable way to get some Sonus fabers into your life, expanding their market to those with lower budgets. You might think this move would require compromise of the sound for which the Italian company is renowned, or at least the style to which Sonus faber customers are accustomed.

But no. The Lumina II standmouters show how impressively the company has succeeded in trickling down its higher technologies and luxurious styling to these lower prices. Which is all the more impressive when it insists on making the speakers at home, in Italy.

•   Sonus fabers at this price!