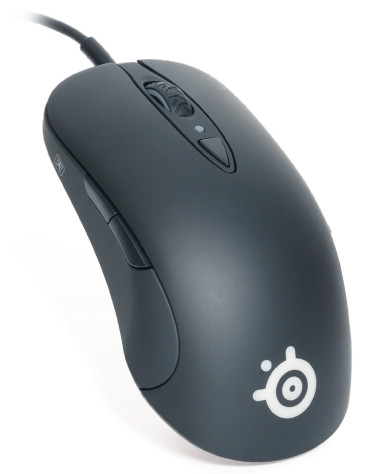 An old favorite gets a new coat and sensor, but is it enough?

The sensei from SteelSeries has been a favorite for many a gamer since the original was released back in 2011. Its predecessor, the Xie, released in 2009, was very similar to the Sensei—almost like a prototype—but since the Sensei itself was born, it has continued to evolve over the years. The original shape was a big hit and although the Sensei 310 did have a change of form, there was uproar from the community and. with the Sensei Ten, SteelSeries has now reverted to what customers know and love.

Using the Ten is like meeting an old friend—you know what to expect and it’s almost as though you’ve never been apart. We get the feeling there is a trip down memory lane to be had with flashbacks of Battlefield 3. There are a few changes, however. A soft touch coating has been applied to all sides apart from the bottom, and although this does make the mouse feel silky smooth, it also makes it a little more slippery, and only time will tell how it will hold up to the hours of intensive gaming that the mouse deserves. The ambidextrous shape of the Sensei lends itself to any grip style, and the eight programmable buttons are easy to reach from the smallest to the largest of hands.

A TrueMove Pro sensor lies under the hood, and although there is very little information from the manufacturer, it seems that after comparing spec sheets, it’s based on the PixArt 3389/3390. This is backed up by the performance, because it worked flawlessly in all of our testing. There was no stutter or ghosting, and it had no problem tracking on the multiple surfaces that we tested it with. SteelSeries has always targeted the FPS genre with the Sensei range, so that’s where we focused the majority of our testing; although it isn’t as light as some of the ultra-light mice on the market, it is still light enough for those coveted 360 no-scopes and flick shots.

As it’s 2021, it comes as no surprise that RGB lighting is incorporated, but it’s only the logo and scroll wheel that illuminate.

If you’re after something that lights up like a Christmas tree, this won’t be the mouse for you. The colors are vivid, though, and easily changed within the SteelSeries Engine 3 software. While on the subject of the software, it’s so intuitive it doesn’t matter if it’s the first time you’ve used it, or if you’re an old pro. It might not be our favorite software suite, but it certainly sits in the top three.

All in all. the Sensei Ten is certainly a contender to be one of the best mice around, but it isn’t without its faults. The cable is rather stiff, the soft-touch coating is a little too soft, and when some other competing mice with similar specs cost as little as $. $ is a bit hard to swallow. Having said that. SteelSeries Engine 3 checks the right boxes when it comes to software. It’s intuitive, easy to use. and also looks the part. The sensor is fantastic, and those who love the Sensei shape will certainly feel at home with this. If you’ve never used a previous Sensei, you will still likely find it familiar; many other mice took inspiration from the series, and some blatantly copied the design.

Of course, mice are very much down to personal preference, and we always suggest getting hands-on with them before purchase. When a company returns to the same shape it was producing nine years ago, it means it has confidence in its product, and after spending a while with the Sensei Ten, we have confidence in it. too.