The Amazing Benefits of Cat’s Claw

Cat’s Claw (Uncaria tomentosa) is a general tonic and anti-inflammatory herb from South America. It burst onto the scene in North America about 30 years ago, and quickly grew from obscurity to become one of the 10 best-selling herbs in the U.S. as scientific research tried to catch up. With almost nothing previously published on cat’s claw before 1998, over 240 new studies have appeared in the scientific literature since then.

Many of these uses center on the herb’s ability to reduce inflammation, which was confirmed by a study published in the Journal of Ethnopharmacology. One very serious inflammatory disease, rheumatoid arthritis, responds to cat’s claw—a study from Austria found that the herb reduced the number of painful and swollen joints. It has also been shown to improve the inflammatory disease colitis.

Several studies report that cat’s claw also benefits patients with osteoarthritis, while others have confirmed its potential for preventing bone loss. A 2020 paper out of Brazil found that the herb exhibited effective anti-resorptive and anabolic effects, which point to it as a possible treatment for certain bone-loss diseases, including periodontitis.

Early on, cat’s claw was described as an inhibitor of NF-kappa B, an inflammation-promoting chemical in the body’s cells. A study published by Albany Medical College in New York, indicates that cat’s claw is an effective antioxidant, but perhaps more importantly, a remarkably potent inhibitor of TNF alpha production. According to the study, the likely mechanism for cat’s claw’s anti-inflammatory actions is immunomodulation through suppression of TNF alpha synthesis.

A small study from Phytomedicine found that people who consumed 700 mg of cat’s claw extract daily for 2 months saw an increase in the number of cells related to immune function. And a report from Sweden demonstrated that the herb increased immune function and enhanced DNA repair. After taking cat’s claw for 6 weeks, men in the study had substantially elevated cell counts for specific markers of immune function.

A new angle in cat’s claw research involves cognitive decline. A 2020 paper looked at the herb for cognition, memory, and learning, with researchers noting that it “may represent a source of phytochemicals that could enhance memory activity, repair DNA damage, and alter AChE activity, there by providing neuroprotection during the aging process.”

The active ingredients in cat’s claw that increase immune function appear to be the alkaloids isopteropodine and pteropodine. The diuretic alkaloids are mytraphylline and hirsutine. Antiviral constituents include the quinovic acid glycosides. Its proanthocyanidins, polyphenols, triterpenes, and plant sterols (beta sitosterol, stigmasterol, campesterol) are antioxidant, antimicrobial, and anti-inflammatory.

The simplest preparation of cat’s claw—and the type preferred in native use—is a tea. Use up to 10 grams per day of dried bark as tea.

Several standardized extracts of cat’s claw are available commercially, including one containing a minimum of 1.3-percent pentacyclic oxindole alkaloids, with a recommended dose of one 20 mg capsule three times daily for 10 days, followed by one capsule daily thereafter. You can also find a hot-water extract from the whole plant containing eight-percent carboxyl alkyl esters with a suggested dosage of 100 mg three times daily. 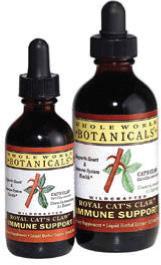 Is Your Skin Going Through a Dry Spell?