Last month we featured Leak going back to their stylistic roots with a wood-encased amplifier straight from the 1960s. This month I’m review­ing here the utterly gor­geous Yamaha A-S3200 amplifier that similarly harks back to this Japanese company’s style and quality standards set long ago (1970s). But where Leak comes in below £ this flagship from Yamaha’s latest amplifier range comes in at a not-insignificant.

And no sign of digital! You don’t even get an app. But you do get an amplifier sublimely styled, built and finished, with remote control. An amplifier so well made in fact it is a mechanical work of art. Yamaha have pulled the stops out here to make the best amplifier they know how to make (and they know how to make ‘em) with no compromises. Listening to hoards of hermetically sealed miniature audio-quality relays clicking out a little tune inside every time I turned the front panel input selector told me a lot about design intent. This is the way to do it, the pure way to do it. And it’s the way the A-S3200 does it.

Unsurprisingly, the A-S3200 has a massive on-board linear power supply, its huge toroidal transformer contributing much to a weight of 24.7kg – a difficult lift I found. This is no lightweight and Yamaha admit it has been designed to be mechanically strong and rigid, so non-resonant. Measuring 435mm wide, 464mm deep and 180mm high it is still compact and will fit a classic 19in (483mm) wide rack.

Mains connection is through a normal IEC connector but there is no earth: it is I guess insulated to meet international safety standards and lack of earth is wanted to eliminate any possibility of hum from the high- gain MC phono stage in particular. Fascinating that Yamaha – arch experts – go down this route.

The A-S3200 has been crafted to be a lovely user experience. Switch on is met by golden illumination from its dominant power meters, an expansive display that wings out as a visual statement. Big and open, not a restrained LED display. And lovely to see. For the price I guess anyone would want and expect such visual loveliness but modern product is too barren to provide visual intrigue. Yamaha nail it here, with an amplifier that shouts its status and their history.

As a pure analogue amplifier with no on-board digital the A-S3200 comes with a wide array of analogue inputs. First point to note however is that they claim this is an all­balanced design. Going fully balanced throughout raises lots of difficulties, in keeping the circuits stable and distortion free, and in adjusting volume on four channels in perfect synchronicity.

I’ve done some balanced design work with discrete devices (not chips) in LTSpice, sweated with prototypes and spoken to designers about the servos needed to keep it all – literally – in perfect electronic balance (or distortion rises). Not easy. I don’t know how Yamaha do it, likely in chips, but it does make for a complex amplifier.

Why bother? Most manufac­turers don’t. They prefer the easy route. But fully balanced, when in a state of balance, does cancel noise and distortion, making for a sense of purity in the sound.

With balanced internal circuitry balanced inputs become primary – and the A-S3200 has them. Not quite all possible I’ll note. There’s no balanced Phono input, nor a balanced power amp input that cuts out the volume control, like our Creek Evolution 100A that mates perfectly with our Oppo BDP-205D with volume-controlled balanced outputs. But this is a minor detail that’s not going to be an issue in real life for most users. Best to bear in mind though that £ buys a balanced amplifier that should be used with balanced sources.

Switch on invokes a prodigious amount of activity from internal relays that chatter amongst themselves. Turn the input selector and yet more clicking sounds. Back in the 1 990s, when running World Audio Design we all realised that the only way to perfectly switch low level audio signals was with super high quality Panasonic relays dedicated to the job. Quoted as good for 3 million operations, fast, filled with inert gas for zero-corrosion, and with super low contact resistance, these were the only answer. But even today they are rarely used: too expensive.

I was heartened to hear that Yamaha have gone down this purist path as the relays clicked away. Most manufacturers use simple, cheap FET switches that are silent and have a long life but introduce non-linearities and noise. It does make the A-S3200 seem a bit over-active at times, with all the clicking sounds, but that is a small price to pay for a purist approach – and Yamaha have not shied away from paying it.

Needless to say, there are oodles of analogue facilities. The meters can be switched from Peak to VU, or off. The headphone output has a switchable attenuator, there are bass and treble tone controls and a balance control. The tone controls have no bypass switch but at central click-stop zero measurement showed flat response.

There is a Phono stage for LP that can be switched to suit moving magnet (MM) or moving coil (MC) cartridges. Yamaha say it is an all­discrete design, avoiding the use of silicon chips. There is a basic EQ stage purposed for MM and an additional MC gain stage (usually x 10). See Measured Performance for more details.

Yamaha’s website shows the amplifier in a classic setting with turntable and Yamaha loudspeakers either side: that’s the message. Back to high quality analogue – the balanced inputs purposed for high quality digital sources having balanced analogue output. 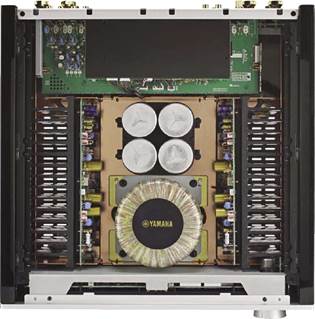 A massive toroidal mains transformer with smoothing/reservoir capacitors dominates the top view. The power boards sit next to the heat sinks at left and right, in classic arrangement.

Spinning through a rake of high dynamic range CD tracks the properties of this amplifier became swiftly clear. Hand drums were very fast and impactful, yet there was lovely sense of tactile clarity to them. Very much a crystalline sound where properties of the crystal glow made it attractive.

If you think by “crystalline” I mean on the brightly lit side of things, then you’re right! The A-S3200 is not a warm smoothy. It is fast and almost lacerative, but in an analogue manner 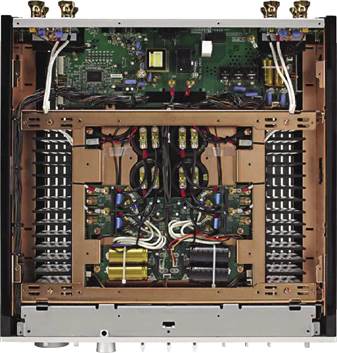 A rigid steel chassis copper plated to reduce eddy currents is made obvious in this underside view. At left and right sit heatsinks below vents, but the amplifier ran cool in normal use.

where there’s no sense of edginess. John Campbell singing Down in the Hole sat on a stage with depth, a sense of icy clarity teasing out the finest details as if spotlit, tinkling sounds at track end jumping out at me.

The deep bass line at the start of Loreena McKennit’s Gates of Istanbul fairly shook the room; there is a sense of massive bass power held under rigid control. Yamaha claim their earthing arrangement and strong chassis both contribute to bass quality. Can’t make a judgement on this but with Safri Duo’s Samb Adagio the strenuous synth bass was spat out with ferocious grip also.

Bass guitar behind Skin singing Hedonism was similarly stark, powerful and controlled, but the guitars of Skunk Anansie jangled hard.

It’s common for readers to ask for almost-mythical “fast, tight bass with slam” – well here it is. But quite dry I’ll note, bit like Chord Electronics Ultima 6 I reviewed last month.

As CDs and hi-res slid by I became increasingly aware that the A-S3200 has a strong sound character of its own. Along with deep insight and rifle-bolt precision it has a hard character – that crystalinity I mentioned earlier. As expected, Willy DeVille’s Spanish Harlem highlighted this, where sibilants in the words “Spanish” and “It” (“It starts a fire there”) had me dive for cover. He’s close to the mic so strong sibilants are there in the recording, it’s just that

I don’t usually get to hear them with such force.

The sense of grip and pristine cleanliness made me want to turn up volume. The A-S3200 is just sparklingly clean and rigidly composed in its sound – as I cranked up the composure remained and I did use rude volume at times – although the meters rarely flicked to 50 Watts (Peak).

High volume was just a tad more amenable from LP than CD, but both were similar in basic tonality – curious considering the differences between these technologies. And as measurement had revealed, there was no hiss at all with MC, no hum either; the Phono stage is absolutely silent – and of very high quality.

But again it had a hard quality. Jackie Leven’s Young Male Suicide (Blessed by Invisible Woman) I use often and know well, and the crashing guitar intro juddered. I could hear every word from the invisible woman though – where sometimes she’s vague. However, this is from an Audio Technica OC9X SH moving coil cartridge that, with boron cantilever, is itself a bit of a cool customer. A cartridge with a warmer sound would better suit methinks.

The rear carries two sets of balanced Line inputs via XLR sockets (top centre) with attenuator and phase selector switches. Two sets of loudspeakers can be used, or both turned off for headphone listening, or both turned on for bi-wiring.

Hugh Masekela’s Uptownship, from his album Hope (180gm) delivered powerful kick drum strikes into the ‘speakers at its start, and hand drums were etched in crystal: spectac­ularly fast and vivid. All the same, there was hardness of tone, a quality consistent with LP, as it was with CD; I expect differences to be greater, but that’s not what I heard here.

Yamaha’s A-S3200 has a style that was unique and admired long ago and to my eyes remains as clean and fresh today. Sharp lines, carefully chiselled and with wonderful quality of finish. The controls work with slick precision too, to give a wonderful feel.

The new A-S3200 is a glorious technological update with advanced analogue circuitry and top quality audio components inside, items that started appearing in the 1990s. In dependable Yamaha fashion the A- S3200 offers superb sound quality, if with stark clarity of a modern variety. Arguably clearer and more insightful than most else, it does at the same time have its own strong crystalline character. A fabulous amplifier though – and a ‘must hear’ I’d say, for its depth of revelation.

The Yamaha A-S3200 produced 100 Watts into 8 Ohms and 192 Watts into 4 Ohms. Yamaha quote 170 Watts into 4 Ohms so the amp meets spec. and has enough power to go very loud. The power supply, with its massive transformer, has very good regulation as power nearly doubles.

Tone controls gave +/-10dB bass variation and +/-8dB treble variation, plenty enough. Usefully small amounts of lift and cut (1dB) could be applied. The treble control, however, when used slightly reduced bass gain – a strange blemish. Bass had to be turned up slightly to compensate.

The MM phono stage needed a low 3.2mV for full output (30V) and overload was sufficient at 50mV. Gain rolls down below 20Hz to -7dB at 5Hz, giving some amount of warp suppression. There is a small amount of bass lift (+0.5dB) around 40Hz, enough to ensure bass weight. MC EQ was identical, there being no less low frequency gain – as can happen with MC.

Gain values were high, MC needing just 0.17mV for full output, meaning it will suit all MC cartridges, no matter how low their output. Input noise for MC was just 0.17 muyV, suggesting very low hiss (0.1 muyV is possible). Input overload was however low at 2.5mV, where 5mV is common even for high gain stages such as this one.

The A-S3200 measured well in all areas. The Phono stage was undistin­guished but in keeping with discrete design.

OUTSTANDING – amongst the best.